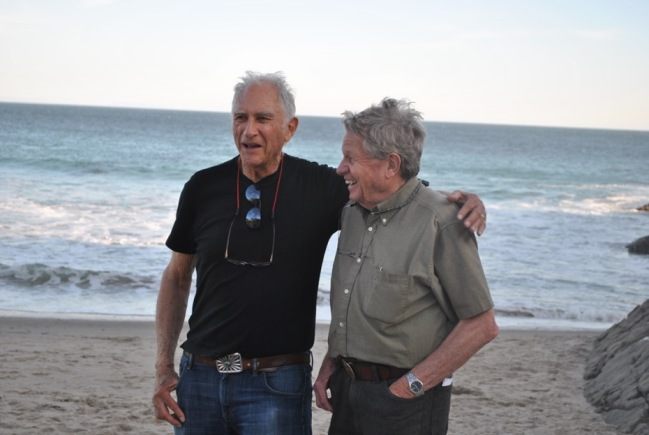 My first job out of UCLA Film School in 1954, at age 22, was directing the 2nd unit of Night of the Hunter for Charles Laughton. Surprisingly, it would become one of the most famous films of all time.

A year later, I won an Oscar for the Civil War short story film, “A Time Out of War”—the first student film to win an Academy Award.

This January, I made my first music video, “To All the Little Girls,” and completed a coming-of-age feature Liza, Liza, Skies Are Grey which opens this month in New York and Los Angeles.

In the years between, as an independent filmmaker I produced and/or directed over 80 documentaries and features (including Robert Redford’s first film) won a second Oscar, several more nominations, a primetime Emmy and dozens of other awards.

The documentaries took me many times around the world—to London, Florence and the Outer Hebrides, to Israel, China, Japan and Balad in Iraq. They took me into the lives of renowned musicians like Aaron Copland and Zubin Mehta, famous writers like Ray Bradbury and James Michner and into the lives of fighter pilots who were shot down in Vietnam, Native American activists at Pine Ridge, dozens of playwrights, painters and politicians—along with hundreds of other interesting characters, both ordinary and extraordinary in the many corners of life.

People sometimes express surprise—and I guess I surprise myself, that I’ve been making movies, and so many movies, for so long—, and they’ve wondered how I keep up the energy.

Passion. That’s really it: It’s all about passion.

I’ve often told people I never really “come alive” unless I’m working on a film project—a project that excites me. It’s what keeps me going, gets me out of bed in the morning.

I’m reminded of a scene in The Story of a Fireman, a documentary I made years ago, and the “trick question” always posed in the oral exam of firemen aspiring to the rank of captain: “What is the most important fire you’ll ever respond to?,” the examiner asks. Of course, the answer must be “The next one.”

It’s much the same with independent filmmaking. It’s a little like you’re crossing a stream, stepping from stone to stone.  Every time you finish a film, you’re out of work, so you look for the next stone, the next film, which becomes “the most important.” You keep moving.

Filmmaking is all about the three “Ps”: passion, perseverance and patience.

Liza, Liza, Skies Are Grey illustrates the patience part. I wrote the script, an original screenplay, in the ’60s. When I wrote it, it was a contemporary California motorcycle road trip story of first love based on fragments of my own life, taking place over four days in the turbulent summer of 1966—a time of the Vietnam Draft, the beginnings of the sexual revolution, civil rights confrontations across the country and living in the shadow of the bomb. 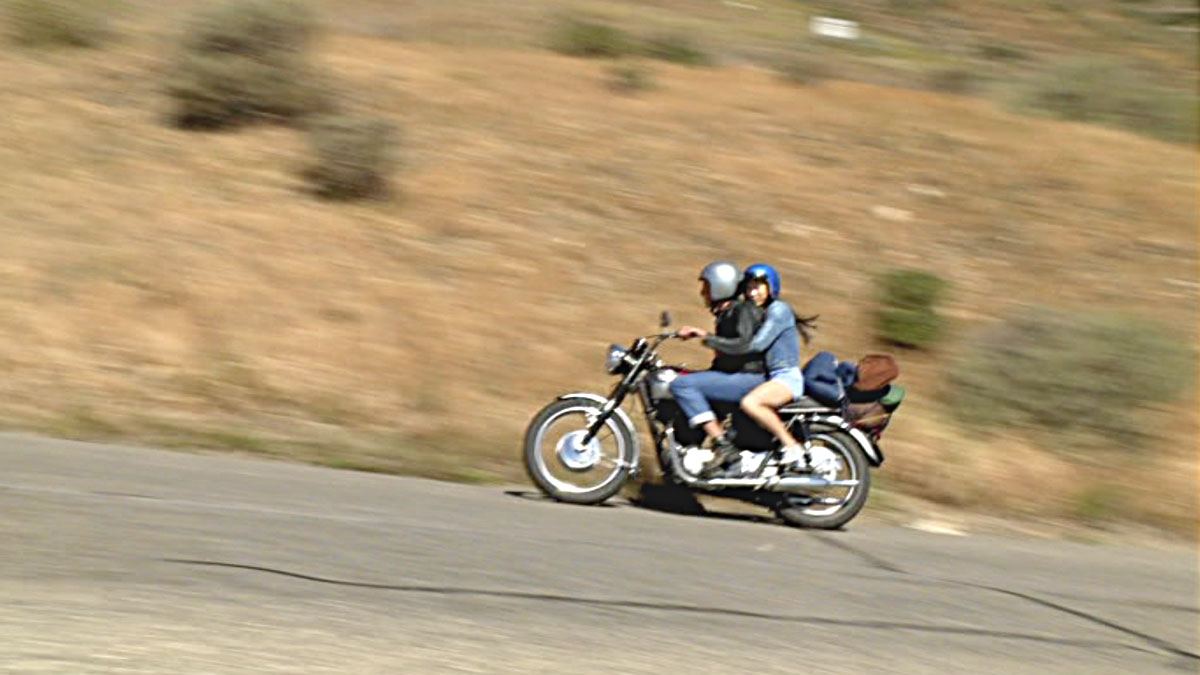 Liza (Mikey Madison) and Brett (Sean H. Scully) on a 1965 Triumph in a scene from Liza, Liza, Skies Are Grey. Image courtesy of Studio G Productions

The film was going to be the first feature produced under the banner of George Stevens, Jr.’s fledgling American Film Institute, but the anticipated funding fell through and my screenplay sat on a shelf for over 45 years—until my filmmaker daughter, Jessica Sanders, read it and said, “Dad, you should make this.”

I decided Jessica was right, but it would be a challenge. Many of the documentaries I do cost well over a million dollars and they’re mostly funded through foundation grants.

Liza required investor funding and for a film without stars, that can be a problem. Moreover, Liza had since become a period piece, now more complicated and expensive to produce with the added costs of recreating long-gone locations and budgeting for vintage vehicles, wardrobe and props.  And I only wanted to do Liza if I could make it as an independent theatrical film and have absolute creative control.

Brett (Sean H. Scully) and Liza (Mikey Madison) at Big Sur in a scene from Liza, Liza, Skies Are Grey

As it turned out, three things convinced me it might be possible to make the film, and make it well, for a very modest cost which a few investor friends I had might cover.

First was the newly minted Screen Actors Guild Ultra Low Budget Agreement. If you could make your theatrical film with a production budget of no more than $200,000, the SAG would allow actors to be paid as little as $100 a day—and only for the days actually worked.

Second, digital technology eliminated raw stock and laboratory costs and provided attractive cost-saving possibilities in post-production, particularly for period films. An example: In the ‘60s, all highway center lines were painted white. Today they’re yellow. With the ’65 Triumph motorcycle shots with Liza and Brett speeding along the Pacific Coast Highway to Big Sur, it was easy to digitally change the center lines from yellow to white.

Third, I had heard of Mark Stolaroff’s No Budget Film School, an occasional two-day seminar focusing on low budget production.  I decided to attend, thinking I’d probably just hear a lot of stuff I already knew. To my surprise, I was inspired.  Seeing so many examples of ultra low budget narrative filmmaking—including portions of a black and white film shot on weekends in London by Christopher Nolan—gave me the decisive push to move forward with Liza.

Films are made up of a thousand moving parts—cast, crew, locations, props, weather, etc.—and for Liza the elements mysteriously and almost magically came together.

Casting always being key, I knew the wrong actress playing Liza would be a disaster. Fortunately, 15-year-old Mikey Madison, newly drawn to becoming an actress, came with her mother to an early audition. It was immediately clear that Mikey was an amazing natural talent and perfect for the role. Some weeks later I discovered another talented young teenager, Sean H. Scully, for the role of Brett.

Erik Daarstad, the great documentary cinematographer with whom I’ve worked with for many years, came down from Sandpoint, Idaho, to shoot the film and co-produce; Patricia Seely, who gave up a career in aeronautical engineering to go into film signed up as line producer; Justin Kell of Glory Motors, who supplies motorcycles and expertise to $100 million dollar Hollywood action films donated a ’65 Triumph to the production along with his services as stunt coordinator and 2nd unit director; an enthusiastic crew of  20 young filmmakers and some recent graduates of film school motivated by the opportunity filled out the team. The cast included 43 speaking parts. Shooting hours were reasonable and civilized, and knowing that a film crew, like an army, travels on its stomach, excellent hot meals were offered every day.

For 25 days over six weeks we shot in 30 locations along the California coast, mostly with available light. Everyone received $100 a day. The film was brought in for $200,000. Liza, Liza, Skies Are Grey is now starting distribution, beginning to find its way, and, hopefully, its audience.

As for me, I’m looking about for the next film. I’ve been developing Tokyo Rose, a WWII story about Iva Toguri, an American hero who, tragically, in a great injustice,  became the first woman in American history to be convicted of treason. I also hope to make a few more music videos. And I’m looking for a contemporary drama—a fresh, important and original story which needs to be told, that I can film in the streets of L.A.

I’m looking for the next stepping stone in the stream. MM