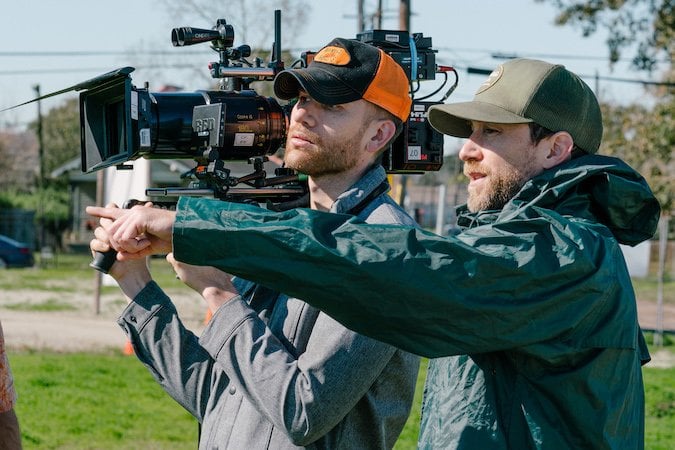 Justin Benson and Aaron Moorhead are the co-directors of the genre-bending Synchronic, which stars Anthony Mackie and Jamies Dornan as New Orleans paramedics who discover a bizarre plot involving deaths from a new synthetic drug. Benson wrote the screenplay. Here they talk about how they met and become collaborators on films including Resolution (2012), Spring (2014) and The Endless (2017) and go over every stage of the moviemaking process, from screenwriting through distribution.

Justin Benson: I was supposed to start medical school, and I had a year off before it would start. And I had previously been a filmmaker for many years and struck out at it, but I thought in this last year, that I would take every internship I could grab. At one of them, I met Aaron, and that was at Ridley Scott and Associates. We never met Ridley Scott. But we bonded over lots of stuff that’s too embarrassing to bring up, but one thing that’s not embarrassing is Stephen King.

Benson: And then we just started working together more and more from the point of trying to do spec ad commercials, because we thought that the way you become a director is to do commercials first. Then you quickly learn that’s not where people typically start any more. It’s where you go to make a living once you already have a career.

Moorhead: If you have any ads, by the way, let us know.

Benson: Aaron and I travel together a lot. We work together a lot, and we’re always knocking around ideas. And then when we fall in love with one, we chase it down, and we generate the material after that.

Moorhead: Those hit like lightning bolts. Once somebody says the right sentence, we’re just like, “that’s our next movie.” It’s that fast.

Benson: Synchronic was written out of a memory of several trips to New Orleans. And once we got the script, we were pretty happy with it, and we worked out with a film festival that they would fly us through New Orleans, on a layover on the way home from the festival, so we could afford to go to New Orleans. We went to make sure that these locations and these things actually still existed and weren’t a delusion of something we thought we remembered.

Moorhead: We go and retool the script based off of what we see. Actually by that point, because we’re even sort of location scouted, we can make a shot list, which means that before we’re even in New Orleans, we’re talking with our visual effects supervisor about extremely specific things, so that we can get the budget right. For us, a lot of the prep happens way early. It happens while we’re writing the script.

Benson: In the movies that we make, there are oftentimes specific shots in the script that the story doesn’t quite work without. But you would never do that if you were writing a script to go sell on the market.

Jamie Dornan and Anthony Mackie star in Synchronic, the “most scaled-up” feature to date from moviemaking duo Justin Benson and Aaron Moorhead

Moorhead: Writing a spec, you have to know that not just the person that you’re going to sell to, but their boss and their boss and their boss are going to like it. So its rough edges often have to get sanded down. Whereas something that’s written exactly for yourself, pretty much all the time, its artistic and commercial value is in how strange it is. That’s really just talking about smaller-budget films. Nobody wants a super palatable four-quadrant $500,000 movie — it doesn’t exist. They want something with some edge, with some uniqueness, with a voice. You can say that you want that on every movie, but it’s frankly not true. A lot of time you come to movies for comfort, and that’s where the movies without the edges come in. So that’s kind of fun about being able to choose to write a script for yourself.