Fact, Fiction or All of the Above? The Sweaty Betty Directors Break Down Their One-of-a-Kind Movie 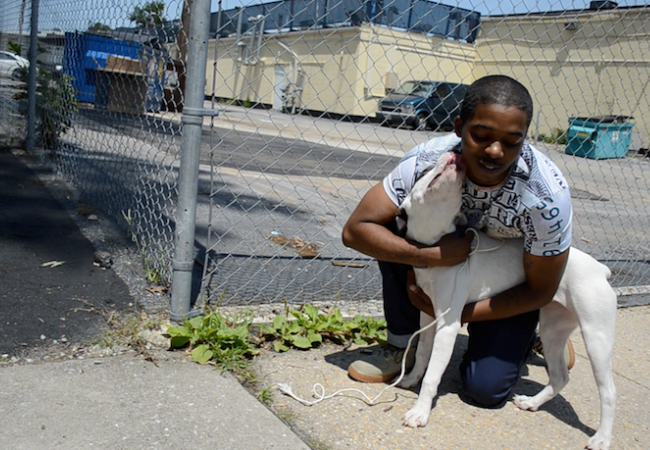 Sweaty Betty tells the story of a family, the Riches, who are determined to make their 1,000-pound pig, Miss Charlotte, the Redskins new mascot. A few blocks away, two teen fathers in search of a better life are presented with an unexpected opportunity.

Everything in Sweaty Betty actually happened, more or less. As we told South by Southwest, this movie straddles the line between documentary and fiction harder than Paul Revere straddled the horse on that historic night ride. The festival programmers enjoyed the film and it was an official selection at the 2015 SXSW Film Festival.

It’s about 50/50 documentary and fiction. The Miss Charlotte plotline, about the pig becoming the mascot of the Washington Redskins, is 100 percent a documentary. The Rico and Scooby story about the two fathers (playing themselves), however, is a reenactment of a real-life story. No matter the scene, we filmed non-actors in their own environments. It helped that the non-actors were our good friends and acted the same on and off the camera. We filmed Sweaty Betty in Landover, Maryland, a low-income neighborhood on the outskirts of Washington D.C. We shot the film in five days over a one-year period.

The real-life Rico and Scooby were standing outside the food mart one day with a dog. Joe started talking to them and they told him how someone dropped off the dog and they were now trying to sell her. We then studied how we could construct their day with the dog into a screenplay. A couple months later, we reenacted that story with Joe’s cousin’s pit bull and a DSLR camera. We shot Rico and Scooby’s scenes like a documentary, in the sense that the interview scenes were real, and they are single fathers. And we filmed in an uncontrolled environment where anything could happen.

The only parts we controlled were the plot points, cues and the pace of the movie. For Rico and Scooby’s scenes, we planned each scene and rehearsed them right before we started shooting. There wasn’t a script, so we would review the different plot points and cues that Rico and Scooby had to remember in order to push the action of the story forward. As directors, we never told them what to say. We would ask them, “If such and such happened, what you would you say? Or how would you react?”

Most of these scenes were shot in one take because we had never edited anything before, and figured one take was the most simple way of going about making a movie that took place in real time. One of our missions was to make a movie that moved at the same pace as real life. We do wish that we’d studied directing, sound and editing techniques beforehand, though, because our cinematography needs some more work.

Before we started filming, we agreed to film Rico and Scooby reenacting and improvising the day they tried to sell a dog. We went into with the mindset of “whatever happens this time, happens”—with these rules:

Once the conversation started flowing, we queued Zack’s uncle to drive up with Joe’s cousin’s dog, and drop her off with the guys. The ensuing lines were rehearsed, especially the plot point of them brainstorming what their next move is with the dog. Are they going to keep her or sell her? The next plot point was to end the scene by deciding to buy a leash.

They walk to the store and see two young women. While Scooby runs into CVS to get the leash, Rico chats with the women. This scene was rehearsed, scripted mentally and improvised. About 80 percent of the lines were plot points and rehearsed together beforehand, with improvised lines mixed in. Even when Scooby came back from the CVS, after Rico got one of the young women’s phone number, Rico reminded Scooby under his breath, “Ask about them youngins [girls],” which queued Scooby to ask Rico, “What happened with the youngins?” If you listen close, you can hear Rico whisper the queue to Scooby.

Later in the film, the guys meet other dog owners who dispense advice

Sweaty Betty opens in theaters January 8, 2016, and will be available on VOD and DVD January 12, 2016, courtesy of Breaking Glass Pictures. Watch the trailer here.

Human at the Seams: Charlie Kaufman and Duke Johnson Make Yearning Tangible in Anomalisa
Rules of the Remake: Martyrs Directors Kevin and Michael Goetz Fight for Their Cause