Kubrick’s Rubric: The Method to Stanley Kubrick’s Visual Madness is Revealed in These Hypnotic Supercuts (Video) 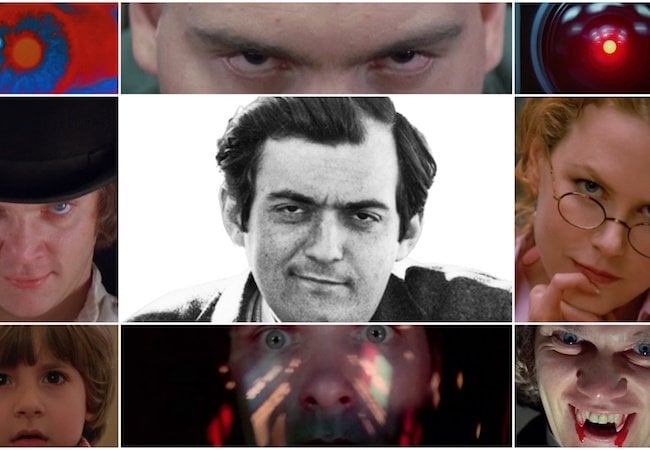 Stanley Kubrick wasn’t coined the “Total Filmmaker” during his rise to directorial dominance for nothing.

Kubrick’s authorial presence could be felt in each frame of his work. One gets the sense that he is more mad scientist than director—that perhaps each character and setting is a mere test subject or variable in a lab where Kubrick is relentlessly experimenting with and observing behavior with clinical detachment.

How does he achieve this effect, and what is its purpose? Watch each of the supercut videos below to discover how the human gaze, symmetrical one-point perspective and the color red are all brandished by Kubrick to continue an ongoing conversation with audiences that transcends narrative, genre, time and space to offer unique, piercing insights into the human condition.

One of the most iconic of all of Kubrick’s motifs running through his movies is the famed Kubrick stare. This playful montage by Jorge Luengo Ruiz shows us nearly all of its usages throughout Kubrick’s career. In each shot, a character’s head is tilted downwards and the eyes glance up, half obscured by his or her eyebrows. It’s a disorienting, unsettling effect and the comparisons present in this super cut only serve to strengthen the ties between each individual piece of his filmography.

Each instance in this video, from the earliest example—the climactic moment from The Killing (1956)—to the very last—Nicole Kidman’s seemingly inviting yet ominous smile from Eyes Wide Shut—represents some of Kubrick’s most important themes. As the hollowed out eyes of Alex DeLarge, David Bowman and Private Gomer Pyle gaze into the camera, the dehumanization and mechanization of the human soul become more apparent than ever before. Formal visual techniques like these can be fun to play around with in the moviemaking process but they don’t hold a truly powerful effect unless they carry the weight of characters and story.

The thematic through-line behind this gaze can be observed in every one of Kubrick’s movies, but this visual motif gives each work another layer and helps to tie each one to the next, regardless of their wildly varying genres. Sci-fi, war and horror may seem like incredibly disparate categories to label films but, under the guise of Kubrick, they become vessels through which the esteemed director is able to probe the limits of the human psyche and the depths to which humanity will go in order to advance the species. Behind each stare and within each eye, we get a firsthand look at the human race the way that Kubrick sees it: cold, brutal, distant and tearing itself apart from the inside. These are iconic, singular moments that serve to define each film.

In this super cut, video essayist Kogonda examines the many examples of Kubrick’s usage of One-Point Perspective, a symmetry in which all areas of the image lead directly towards a singular point in the center of the screen. Throughout the video, leading lines are incredibly apparent in Kubrick’s image and they always line up toward a singular destination for the viewer’s eye to reach. The perfect symmetry is often designed so that it accompanies unnerving, horrifying or shocking revelations.

The long hallways of the Overlook Hotel lead viewers to the ghosts of a tumultuous past that is not done with the film’s characters. The iconic Stargate of 2001: A Space Odyssey draws our eyes further and further into the void of infinity. The French military’s rifles point inward toward the doomed victims in Paths of Glory, an image both pleasing to the eye and upsetting to the soul. The soldiers wipe the floor of a bathroom in Full Metal Jacket, as the line of toilets draws our eyes toward the pointless monotony of the tasks. As can be seen in each of these examples, the many ways in which symmetry and composition can be used are integral when planning to achieve the effect you intend for your film to have on your audience.

In each of the shots present in Kogonda’s essay, Kubrick uses his visual compositions to play with the audiences’ expectation of what should and should not be a pleasing image. Each shot is designed to invite the viewer, almost serving as a form of hypnosis. The long, winding halls of the Overlook hotel strengthen the film’s grip on the audience like a tightly wound coil, with each snaking corner drawing us further and further in. It’s a disorienting effect, especially because of how much pleasure we often find in symmetry. A master manipulator, Kubrick smashes our expectations to pieces and reassembles them into a bewildering amalgamation of horror and beauty.

The color red can evoke a wide relay of emotions and states: joy, sexuality, passion, sensitivity, love, vigor, willpower, rage, anger, leadership, courage, wrath. This supercut by Rishi Kaneria examines the presence of the color red in the films of Kubrick. From the spaceship bathed in red in 2001: A Space Odyssey to the red-carpeted orgy in Eyes Wide Shut, Kubrick has exploited this color to its fullest potential, often invoking an array of emotions in just a single image. As has often been observed in Kubrick’s filmography, his films are a constant blending of sex and violence, life and death and everything that these dualities represent.

One of the most prominent images in the supercut is of Bowman inside the birth canal-like chamber of the spaceship Discovery in 2001. In this image, Kubrick is examining the death of one era and the birth of another—all symbolized by the red light that is encapsulating Bowman, the human at the center of a shifting universe. This image, combined with the extended Stargate sequence, summarizes all of 2001—and it is not an image that can be told without the red hues cast upon the human body.

Often described as a cold and often inhuman director, Kubrick’s usage of the color red only proves that the essence of humanity is, and always has been, his primary concern. A passionate and vibrant color in any capacity, the abundance of red in the images that Kubrick has produced serves to show how integral color is to the filmmaking process. It’s important to understand that a shot bathed in red can tell an entirely different story from a shot bathed in blue.

What do these Kubrick supercuts teach you about moviemaking? Which is your favorite? Let us know in the comments below. MM

The Great Invisible: With Personal Shopper, Olivier Assayas Makes Serious Stabs at the Supernatural
How They Did It: All Nighter Crams 35 Locations Into A 22-Day Shoot to Capture All of L.A. (Exclusive BTS Photos)