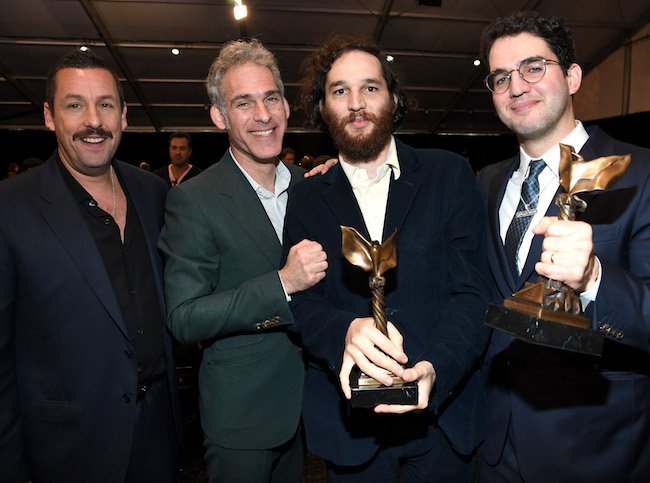 The Film Independent Spirit Awards weren’t quite the hottest ticket in Hollywood this weekend, as host Aubrey Plaza noted in her jokes and Adam Sandler acknowledged in a hilariously pointed acceptance speech. We get it: The Oscars are a bigger deal.

But the nominees still made wonderful films and learned lessons along the way. MovieMaker asked a few of them on the blue carpet what they learned while making their independent films. Here’s what they said.

“We learned to ask questions and not be embarrassed about the things we didn’t know. There are so many people in the community who are very giving with their time and their knowledge, so when we didn’t know what something was or how something worked in production, we just learned to not be afraid to ask.”

(Thureen was nominated for Best First Screenplay for Driveways)

“Everything will always go wrong when you’re working on a film. … There are so many conflicts, there are so many complications, but if you’re in love with your story, and your team is in love with your story, you will make it. You just have to hope for the best and don’t let anybody stop you from making your project. With that, I think the biggest lesson is resilience. Don’t give up, you have to continue until your project is out there.”

(Aparicio was nominated for Best Foreign Film for Retablo)

“There’s a lot you can do with a small budget, and in a lot of ways, having a small budget forces you to be resourceful and find creative solutions to what you’re making and it connects you to the essence of the film. So I think there’s something to be said about working with a small budget.”

“Tenacity is worth it. There are many ups and many downs but keep your eye on the ultimate prize.”

(Bentley was nominated for Best Feature for A Hidden Life)

“Go with the flow. Be patient, everyone is there for a reason, everyone wants to make a good film no matter what. Whatever happens is gonna happen, but as long as you keep the integrity of everyone on set and everyone is respectful, then that’s what matters.”

“Have more prep time! And always trust your collaborators. The guys I made this film with were relentless in their belief on how to do it, and they were right. So being able to design it based on what they needed was really important.”

(Lang was nominated for Best First Feature for The Climb)

“Work with people who you enjoy talking to every day and watch as many movies that are being made alongside you as you can.”

(Covino was nominated for Best First Feature for The Climb) 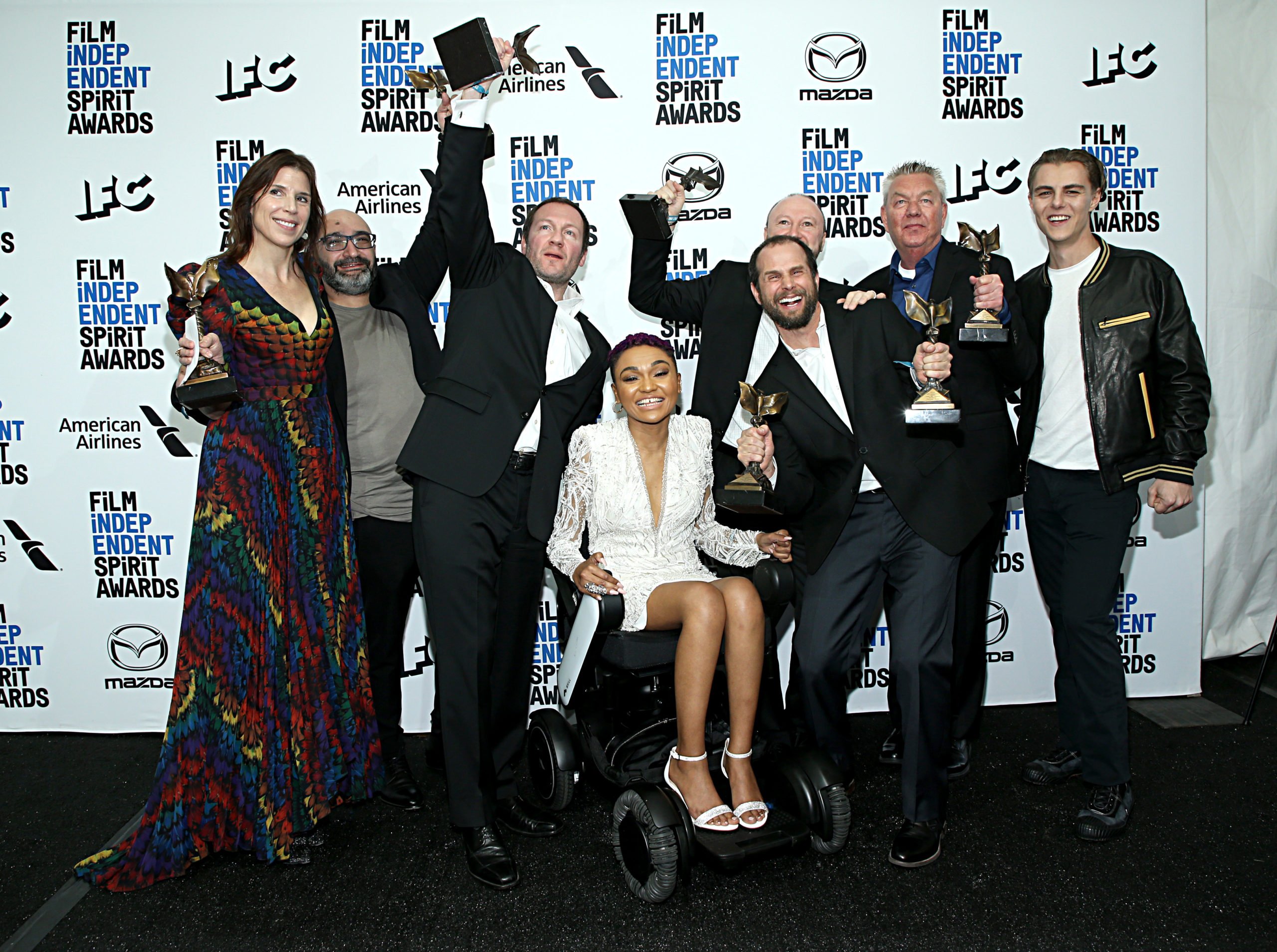 (Cornelius and Cautherley were nominated for Best Feature for Clemency)

Begue: “It’s just about writing from the heart and writing about things that you’re passionate about and that scare you a bit. Be genuine!”

Snyder: “You can try to target what people want. On paper, this film never should have existed, and yet, it attracted kindred spirits. Just that confirmation that the deeper you go towards finding what you love and what you’re drawn to, means a lot.”

(Begue and Snyder were nominated for Best Screenplay for To Dust)

Bailey: “As a writer, one of the biggest things I learned was seeing the whole filmmaking process. Oftentimes, as a writer, you’re only in the script phase, but this film was a great opportunity for me to see what happens after that and how the script has to change and adjust and how production plays a role in that.”

Bristol: “As a director, I learned I’m only a manager, everyone else is a director. It’s patience with your collaborators and allowing people to share their experiences and expertise to give you what you need as a filmmaker to tell your story. You cannot be a dictator. You have to allow people to do their thing but still guide them in a way to make sure they’re still telling the story.”

Rifkind-Barron: “Anything is possible as long as you strategize enough the night before and if you rely on a network of filmmakers and friends. Use any favor to help get your film made, it will count. Dig deep to find the people who are really there for you.”

Andreas: “Never give up, keep going!”

(Olnek, Rifkind-Barron, Albelo, and Andreas were nominated for the John Cassavetes Award for Wild Nights with Emily)

Green: “If you can’t see the end through the trees, just keep going. There’s going to be a lot of toil and struggle and sweat, but if you persevere, there’s light at the end of the tunnel. Just rely on each other, support each other, and continue to move forward through treacherous waters.”

Howard: “Bring your full self to everything that you do. This is an industry with a long history of a certain way of doing things but there’s room to switch it up, to bring something new, and to bring your voice and the way you see things. Bring all the things that you are into your work because there’s room. We can make room for it all.” 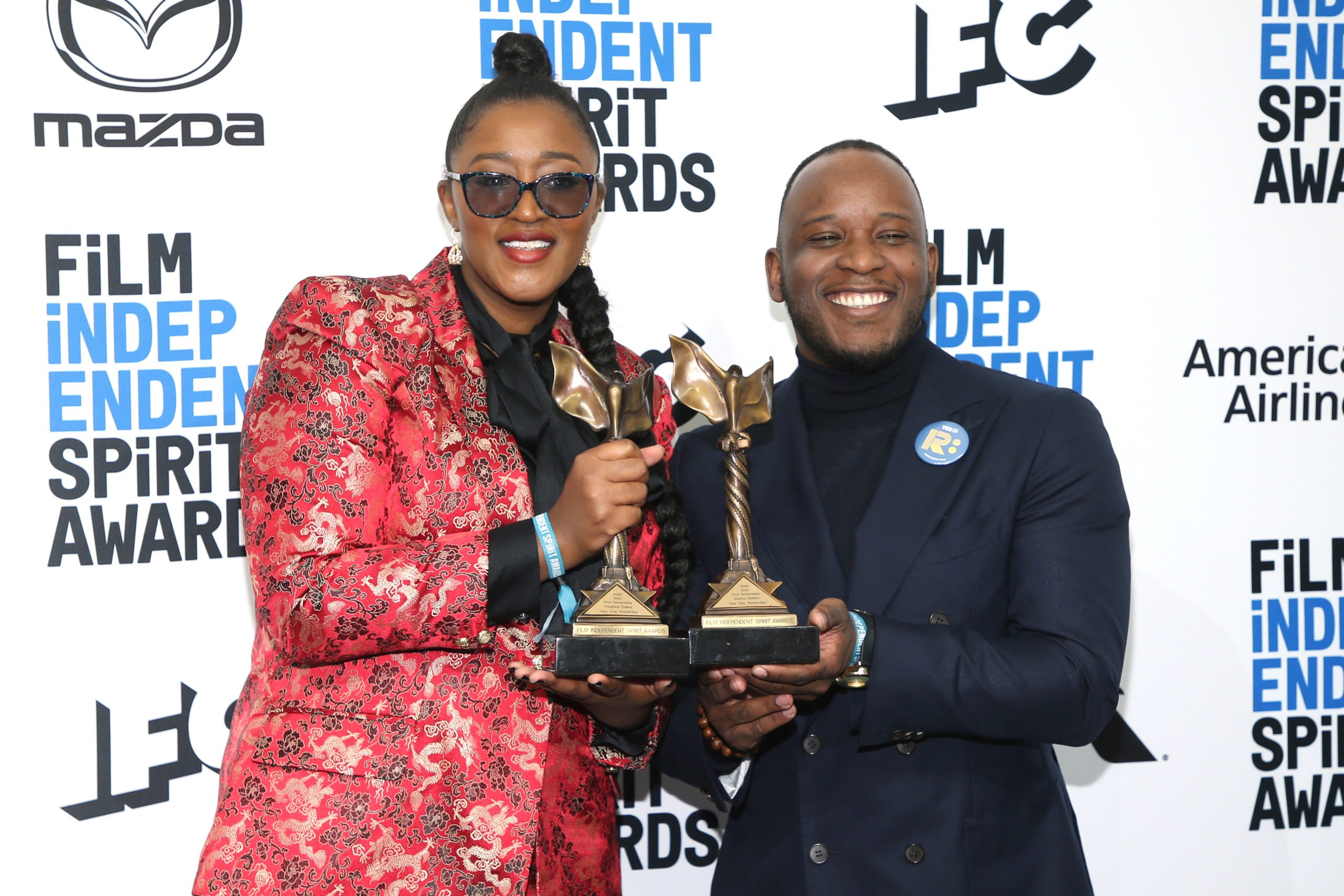 Fredrica Bailey and Stefan Bristol pose in the press room with the Best First Screenplay award for the film See You Yesterday. Image courtesy of Getty Images and Film Independent

“The biggest thing I learned was that I could do it. That I had the endurance and stamina to do it because it was a really demanding part. The process of making this movie is one of the greatest gifts of my life. I learned about resilience because this woman [Diane] kept going on through all of her struggles. So I learned that we all need to have resilience and faith and to just keep going on, knowing there’s love everywhere.”

(Place was nominated for Best Female Lead for Diane)

(Shihab won the Truer Than Fiction Award for Jaddoland)

“The value of seeing a story through to its finish. We started filming in 1999, and there were a lot of times throughout where we wondered if we were done. But we knew we weren’t quite done, and I think for a documentary project you’ll really know when you’re done. It might be one year, it might be five years, it might be twenty, but see it through to the end.”

“I had to find a different system of working for this movie. Because it was so personal for Shia [Labeouf] to get in the skin of his father, that I felt a big responsibility as a cinematographer to protect him. We knew it was going to be very challenging for him emotionally so I thought, the more invisible and less disruptive I could be, the better. So the lesson and the challenge was how I could do that without losing the cinematic quality so I had to learn a new way of lighting. This meant that I would watch a scene from outside of the room on a monitor and then adjust, rather than be in the room with him. I had never done that before, and even though there was a big learning curve, it was a great lesson. And now that I’ve done it, I want to continue to do that for all the actors I work with so they can stay in their world.”

(Braier was nominated for Best Cinematography for Honey Boy)

“There are folks who have been in the fight for equality for a long time in this country and sometimes they don’t get as much attention and shine as they should.”

(McCraney was nominated for Best Screenplay for High Flying Bird)

“Don’t compromise what you believe in.”

(Austen won the John Cassavetes Award for Give Me Liberty)

Who Was Jimmy Hoffa?: Things To Know Before You See The Irishman
Janelle Monáe’s Oscars Intro Honors Films That Weren’t Nominated