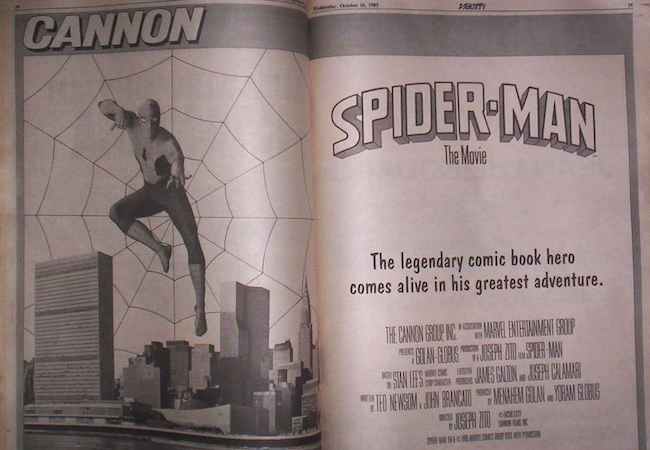 At the 1986 Cannes Film Festival, the impresarios of Cannon Films — best known for movies like Breakin’, Superman IV and Over the Top — showed up in matching tracksuits, with a grand vision. They announced plans for 60 films — a slate far bigger than that of major studios — with actors including Al Pacino, John Travolta, Walter Matthau, Whoopi Goldberg, and more, with creators like Paul Schrader and Roman Polanski. Among the films Cannon dreamed of creating were Spider-Man and a sequel to Chinatown.

The Chinatown sequel, The Two Jakes, did eventually come to fruition — but at Paramount, not an upstart operation known for relatively low-budget films.

Despite Cannon’s splashy Cannes appearance — amid the likes of Martin Scorsese, Steven Spielberg, Woody Allen and first-time filmmaker Spike Lee — it would be defiant within eight years.

So what happened to its ambitious film slate? Dan Delgado answers that question in the latest episode of The Industry, his documentary podcast series about Hollywood’s weirdest decisions. You can listen on Spotify or Apple or above.

Cannon, which was founded in 1967 and had early success making English-language versions of Swedish soft-core movies, fared better than many upstart film companies. But it also made many strange decisions along the way, as Delgado recounts.

He relies in part on Austin Trunick’s The Cannon Film Guide, a series of books detailing Cannon’s strange and fascinating history. And he speaks with screenwriter John Brancato, who worked on an early version of a Spider-Man film more than a decade before Sam Raimi’s Spider-Man trilogy, starring Tobey Maguire as the webslinger, broke numerous box-office records.

Brancato, who with Michael Ferris wrote successful films including The Net, The Game, and Terminator: Salvation, recalls in the episode how he ended up working on Spider-Man after initially working with Stan Lee on a Nick Fury movie. (Fury, as played by Samuel L. Jackson, would later become a crucial character in the Marvel Cinematic Universe.)

So it isn’t that Cannon didn’t have great ideas for movies — it’s just that money and (again) weird decisions often got in the way of bringing them to life. Prepare for a lot of interesting asides and detours as The Industry tells the story of Cannes’ 60-film slate.

The Suicide Squad Director James Gunn on What Makes a Crappy Supervillain Crappy — Starting With Polka-Dot Man
Down With the King Is for Everyone Who Loves Film, Hip-Hop and the Great Outdoors