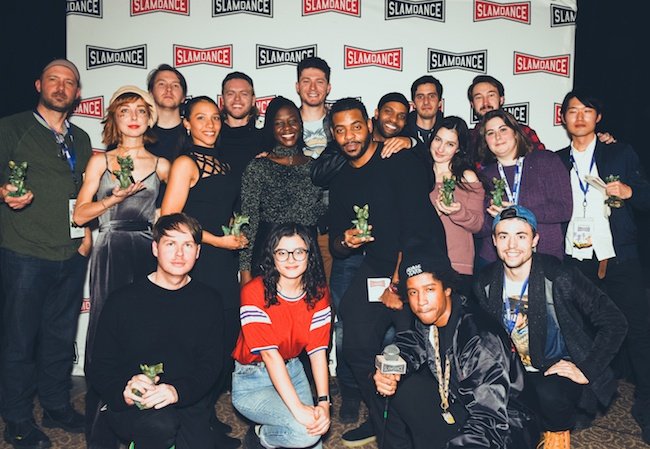 If 2018 was the year Sundance struggled to answer how much of its DNA is market-driven and how much of it is art-driven, for the perennially top tier fest’s free-spirited, also Park City, Utah-based rival—Slamdance (January 19-25, 2018)—it marked a year of record-high performance in all the right places, and reaffirmed its identity as an anti-establishment alternative to the commercialized hullabaloo of Robert Redford’s brainchild.

Street’s Treasure Mountain Inn, Slamdance’s scrappy staff, led by co-founder and President Peter Baxter, roped in 3,666 submissions to its screenplay competition—an annual influx unprecedented in the festival’s 24-year history. That number paints just part of the bigger picture: Between Don Hardy and Dana Nachman’s Pick of the Litter selling to Sundance Selects within the first 24 hours of its opening night screening (making it the first doc feature sold anywhere in Park City this year) and the addition of three new awards, including The Russo Brothers Fellowship (a $25,000 prize), Slamdance is finding new ways to turn a sizable chunk of beanie-clad independents’ heads, amidst those deciding how best to split their time between the neighborhood film community’s two parallel ports of call. Explained Baxter on Slamdance’s closing night: “Thousands came to appreciate our diverse international program, including our neighbors Sundance. As the major acquisition of Pick of the Litter demonstrates, we can expect millions more to follow as our filmmakers and their work continue to attract global recognition out of our showcase.”

To counterbalance its acquisitions with accolades for deserving helmers whose work is not yet market-ripe for the picking, Slamdance, as usual, limited its field of competition films to debut moviemakers whose film cost under $1 million to make, and with no U.S. distribution deal in place. This approach kept the jury’s focus on directors’ style, storytelling, and resourcefulness, rather than the extent to which their film, as “product,” promises mass appeal or successfully caters to a target demographic. Yassmina Karajah, director of the immigration-centric narrative short “Rupture,” received the Anthony and Joe Russo-sanctioned top cash prize, and a jury comprised of moviemakers, programmers, and producers presented the Sparky Award for Best Narrative Feature to Rock Steady Row, director Trevor Stevens and writer Bomani Story’s genre piece that jurors described as a “comic book meets George Miller meets John Carpenter universe.”

Incentive to compete at Slamdance has arguably never been greater, but even just a few exchanges with the fest’s attending talent will leave you asking whether anyone in the mix cares who “wins” in the first place. That’s not a knock on the degree of recognition that a win here can bring, but rather an impression of the fest’s support system—gleaned from the unforced, encouraging chats between creative pros that would organically arise during each new day’s happy hour—that’s hard to shake. For all of the inevitable comparisons to the bigger “dance” it invites, Slamdance is only interested in being itself. MM