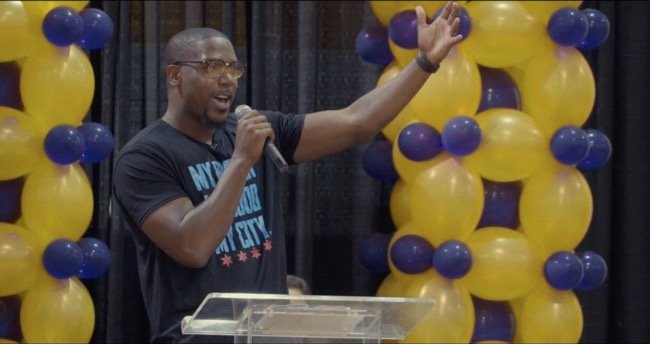 A Tiny Ripple of Hope — now available to stream through the Slamdance Film Festival — follows Jahmal Cole as he works tirelessly to help Chicago youth from the South Side. But despite his growing profile as someone willing to step up and serve his community, the film also examines the financial toll this role has taken on Cole’s life.

In a post-screening Slamdance Q&A, A Tiny Ripple of Hope director Jason Polevoi talked about his discovery, while filming, that Cole was having serious financial troubles.

“I didn’t know any of the struggle that Jamal was going through when we first started making the film,” Polevoi said. “The very first time we filmed with him, like 150 people showed up to hear him speak. It was like, ‘This guy is killing it.’ The line that sticks with me, Jamal said that he’s ‘the most visible poor person in the city.'”

Polevoi added that the public perception of someone like Cole who is involved in their community can be markedly different from reality.

“People think that he has unlimited resources and that he’s rich and can afford to just kind of like, be a philanthropist, whatever that means. And the reality of the situation was much different. That’s what became really important for me and my team to capture, to show the reality of what it takes to do the work that Jamal’s doing. You don’t just wake up, roll out of bed and do it. It takes sacrifice,” Polevoi said.

Cole’s selflessness is an inspiring element throughout A Tiny Ripple of Hope, and Polevoi explained that what he witnessed went beyond financial sacrifices.

Chicago is still one of the most heavily segregated cities in America, and a big part of Cole’s outreach involves taking young people on trips outside of their segregated bubble. In this exclusive clip below, Cole explains that in order to pay for these trips, he neglects his mortgage payments.

Lena Waithe, a fellow Chicagoan whose Hillman Grad Productions is dedicated to highlighting marginalized voices, also appears in A Tiny Ripple of Hope to discuss the lack of access to opportunity these youth face.

What Spike Lee Told Chadwick Boseman Before Da 5 Bloods’ Most Emotional Scene
Behind Her Eyes and Astral Projection: Things to Consider Before You Try It at Home