Shtumi in the Spotlight: How to Turn an Info-Heavy Story into Riveting Drama

“That first draft must have been 300 pages.”

If I had a nickel for every time someone’s said this to Spotlight director—and my co-writer—Tom McCarthy or me in the last couple of weeks, I’d have a lot of nickels. We’re constantly asked how we managed to squeeze so much information—about the Boston Globe’s 2001-2002 investigation into sex abuse within the Massachusetts Catholic Church—into two hours on the screen.

Well, for the record, our very first draft was 131 pages. And our final shooting script tallies 132 pages, give or take. How did Tom and I boil down “all that information” into a reasonably sized script?

Condensing true-life stories into screenplays is hard. I’ve spent the past dozen years trying to figure out how to do it and I’ve still got lots to learn. Part of the secret to making talky, information-heavy movies cinematic is making sure the talk you do have is as clear and concise as possible. I’ll get specific on that in a second. First I have to talk about shtumi.

My first writing job was working for John Wells on The West Wing. At the end of the fourth season is an intense cliffhanger in which the Speaker of the House has taken over the presidency. I was fresh out of law school, so Wells asked me to research the 25th amendment, which deals with the line of succession to the presidency.

I read everything I could on the 25th amendment. I even called up Akhil Reed Amar, a leading constitutional expert on the U.S. line of succession. Then I wrote up three different memos and pitched at least a half a dozen different story ideas on how all this could be turned into high drama at the White House.

Wells didn’t take a single one of my pitches. And shortly after receiving the third of my less-than-memorable memos, my good friend, writer Debora Cahn, pulled me aside and taught me an invaluable lesson—one that gets at the key to moving from a talky, expositional scene to one with real dramatic value.

What you need to focus on in any given scene, Debora explained, is not the information you’re trying to get across, but the shtumi.

What’s shtumi? It’s a Yiddish term that Debora picked up when she was working on the TV comedy series Inside Schwartz. It’s derived from the word “shtum,” which means “silent or speechless.” So the shtumi is the thing in a scene that will leave an audience speechless.

In comedy, that can be a lot of things. But in drama, it’s the transaction at the heart of a scene. It can be (and often is) a plot transaction, but most successful scenes have a core emotional transaction, one that has very little to do with facts, information or political issues. Whether you’re having Toby discuss the importance of a constitution in a new regime, or you want Leo and Bartlet to argue about Middle East peace, if there’s no central emotional transaction—if the scene doesn’t have a shtumi—you’re sunk.

I’ve spent the better part of my career trying to clean up the informational clutter in my writing and find the shtumi. Which brings me back to Spotlight. 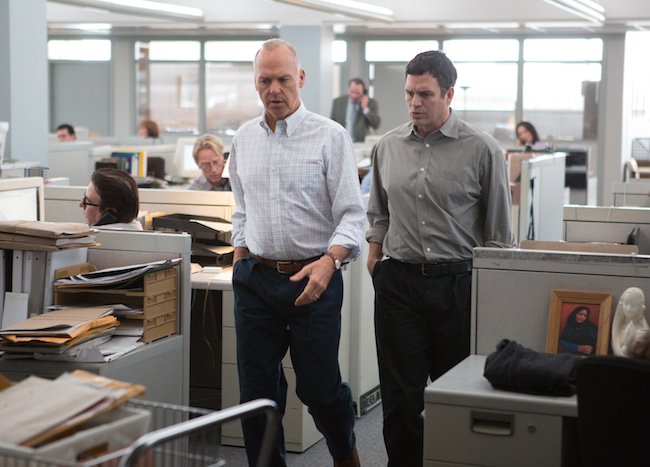 Michael Keaton as Walter “Robby” Robinson and Mark Ruffalo as Mike Rezendes, reporters for the “Spotlight” section of the Boston Globe. Photograph by Kerry Hayes

No one understands shtumi better than Tom McCarthy. During the shoot, on more nights than not, we’d be riding home from set after a long day and Tom would say, “Let’s take another look at the scene we’re shooting at the end of the week.”

I won’t say this didn’t give me pause. After all, we’d already rewritten most of our scenes at least a dozen times before production started. And monkeying with a fairly tight scene at the last minute is not for the faint of heart. But, invariably, when I’d look at the scene in question, I’d realize that we hadn’t nailed it—we hadn’t found the shtumi. So we’d push and push on the scene until we’d gotten to something cleaner. Something tighter, something deeper. Something better. Shtumi.

One of my favorite examples of this is the Mike and Robby scene that happens about a half hour into the movie. In this scene, Mike (Mark Ruffalo) and Robby (Michael Keaton) resolve to talk to abuse survivor Phil Saviano despite the push-back they’ve received from others inside and outside the Globe. Here’s the version of the scene we had going into shooting:

Robby’s looking over some of the clips Matty pulled.

Shouldn’t you be golfing?

Robby looks up. Mike’s in the door.

Couldn’t get a tee time.

Is that what they call it? A tee time.

Yeah, they also call it a leisure activity. You should try it.

You run to work.

That the file on Saviano?

I heard. I got an email from Ben.

Look, I know I can be a little eager sometimes…

That’s a nice word for it.

But, I just… you think Ben’s missing it on this one?

He doesn’t miss much.

Yeah, but, I dunno if it’s because of Baron or ’cause it’s the Church…

Baron’s an outsider. Church does a lot a good in this town.

Those aren’t reasons not to go after this.

They look at each other. On the same page. Resolved.

I’m gonna shower. Then we dig in?

Mike smiles and starts to go.

Mike? We gotta get this right. Air tight. Or the Church’ll bury us.

The Church? The whole frickin’ city.

Mike leaves. Robby picks up the file, gets to work.

The scene’s not bad. It conveys essential information: People Mike and Robby respect at the Globe think Saviano’s a waste of time. But Robby and Mike decide to push ahead anyway. And this is clearly risky.

High Concept, A Recipe: The Four Essential Components to a High-Concept Pitch
MovieMaker’s Fourth Annual Guide to Digital Distribution: A Game of Thrones