On the Inside: To Make His Feature Shot Caller, Ric Roman Waugh Learned How to Shoot in a Real-Life Prison

Shot Caller was the most physically demanding film I ever shot: an authentic look at our prison gangs and the law enforcement professionals who guard them inside prison walls and hunt them down on the streets.

In order to get a real-world grasp of prison and the gangs that run these institutions, I went undercover as a volunteer parole agent in California. What started out as a simple research assignment became a two-year odyssey as doors kept opening, allowing me more and more access into this violent world.

No one knew I was a filmmaker. They just saw me as a rookie cop, so nothing was censored. What I quickly learned is that though the guards might control the doors and gates, the gangs run the prisons… and they run the streets as well, directly from prison.

The film takes place over 10 years and we wanted it to show different levels of incarcerations and how older prisons, as well as new, modern prisons, look. The only set we had to build was the Security Housing Unit—there are no real ones that are available to shoot in—but the rest were all real.

We researched extensively on what different institutions look like, from their exteriors to the the visiting areas. Every set Nikolaj Coster-Waldau (who plays Jacob, my protagonist) encounters on his journey is authentic to its real-world counterpart, right down to the warnings on the wall. Our additional research included spending time with, and hearing the stories of, former prison gangsters and “shot callers,” the kingpins of the power structure inside, and often outside, the prison system. The men gave us full accounts of prison and gang politics and what it really takes to survive prison, which included vivid descriptions of how the gangs acted within their own peer groups, and how they responded to and manipulated new recruits. This was not merely a philosophical exercise—subscribing to this code literally defined one’s chances of survival inside.

I learned the emotional context and behavioral mores of this prison “fraternity.” First, the gangs, divided mostly along racial lines, lure in the newbie with the promise of protection of numbers, calling the recruit their brother. But this security comes with a price: Said newcomer is then instructed by the gang to carry out its orders without question, even if it meant using lethal force. There’s no choice, it’s the price of membership: Stab or be stabbed. On and on it goes, escalating over the years so that this type of behavior seems normal and indeed remains the difference between life and death—often even after release. 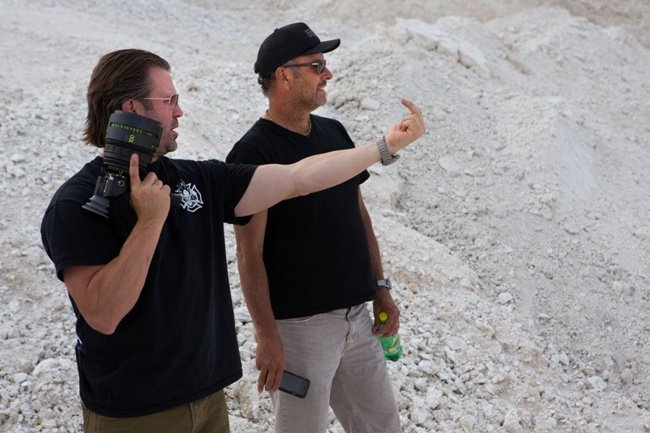 Waugh and DP Dana Gonzales on the set of Shot Caller

DP Dana Gonzales and I love shooting in real locations. We prefer its authenticity and it also gives actors an edge, versus sitting in a cushy soundstage with fake walls. Dana has become a master of lighting in real settings, using practical lighting instruments to be the key light while being in the shot as well. We shoot 360 degrees most of the time, so embracing the practical lighting approach helps us achieve that.

You have to schedule your day differently shooting in real prisons, even a vacant one. Example: The empty prison we used for Chino (with the three tiers of old iron bars), most crew had to push their equipment and carts a quarter mile through hallways to get to it. Even actors had to walk that far between shots from makeup. In the active prisons, you have to account for security and allowing time for the guards’ process. That’s the price you pay for getting a real location. In turn, there’s an accuracy and credibility that we couldn’t achieve elsewhere—not just merely because the set is a prison, but because it also contributes to the overall sensibility and mindset, for the cast and the crew.

Yes, nearly every background actor was a former convict or gang member. I love filming with them. When you treat someone with respect and make them feel a part of the process rather than cattle, they will give you everything they have with the same respect back. In the riot scene, there were more than 200 guys involved, and we had zero incidents. It was great to see formal rivals of different factions and races making it as real as possible while in combat, then smile and help each other up after we yelled “cut.” (Of course, I’m not advising just anyone to do that. You need to understand the world a convict comes from and how to speak to them, and that comes with experience.)

Our biggest challenge was hooting all those locations and getting solid performances in just 22 days. My style was to allow people, both cast and crew, contribute to the process, even on such a short shoot. I come prepared but leave tons of room for improv and creative free-flow, so plenty of great things come from that. MM

Shot Caller opened on DirecTV July 20, and in theaters August 18, 2017, courtesy of Saban Films and Lionsgate. An abbreviated version of this article appears in MovieMaker‘s Summer 2017 issue.

Labors of Love: With the Robert Pattinson-Starring Good Time, the Safdie Brothers Have Officially Made It
Family Affair: How the Director of Baby Steps Used the Making of the Film to Connect To His Mother

Whirlybird Doc Soars Over Fires, Riots and Killings to Tell the Origin Story of Breaking News