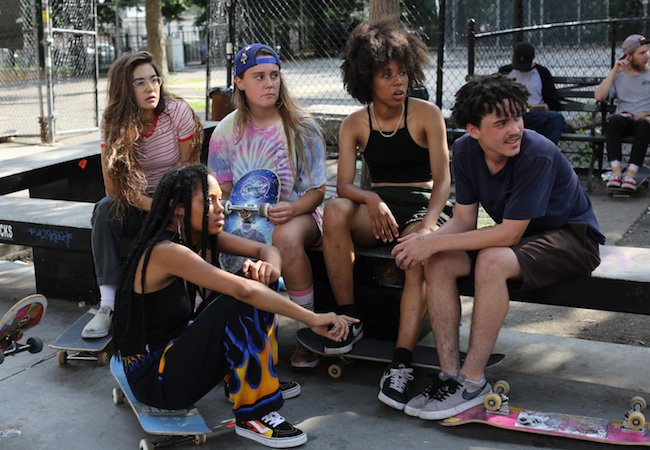 As DP on Skate Kitchen — writer-director Crystal Moselle’s first narrative feature about an all-female skateboarding crew coming of age in New York City — one of my major challenges during prep was figuring out how to go from a shoulder rig to a bare bones set-up that we could skateboard with quite quickly.

The Alexa Mini was the perfect camera for that—not just because of its size, but also because of its internal Neutral Density Filters (NDs). Panavision supplied us with customized Ultra Speed lenses, which helped take a bit of the harsh edge off of the highlights of shots without adding extra weight to the camera by stacking filters.

Skate Kitchen was one of the most physically demanding shoots I’ve ever worked on. Our skateboard cam operator Joey Dwyer did a lot of shots inside skate parks on a regular skateboard, and most of the shots on the streets were done with a one-wheel system, which is essentially a motorized skate deck which goes up to about 20 mph. Our skate cam was operated mostly handheld, with a custom top and side handle rig to keep the shots in sync with the rest of the film’s visuals.

Shooting anything in a skate park was a challenge because we had very little control of what was happening around us. We shot during the summer in New York, so the kids didn’t have school and the parks were always filled with skateboarders. Figuring out ideal times during each day to shoot certain dialogue and skate sequences was a challenge not only because the light was constantly changing, causing harsh reflections off the concrete surfaces, but also because the capacity of the park would fluctuate all the time, effecting continuity. (All of this goes without mentioning the occasional rogue skateboard flying toward us mid-take).

Our approach to lighting was very simple: We didn’t want the film to feel too affected, so for exteriors, we went with all-natural light and worked closely with AD Duccio Fabbri to schedule certain scenes to meet the sun. To shoot interiors, we relied heavily on LiteMat LEDs and practical lamps, whose lighting helped to keep those visuals low-key and intimate.

All of our days were pretty wild, but one in particular took the cake. The scene was of 60 skateboarders who skate from a park in New York’s Lower East Side over the Williamsburg Bridge into Brooklyn, and the entire sequence needed to be in motion. We could only do it once. Our whole crew was on wheels: ACs were on rollerblades, pulling focus along with the sound department; A cam was on a rickshaw with a zoom lens; Our skateboard cam, which captured all of our in-motion action shots, was on the one-wheel system; Director and 1st AD were on bicycles; PAs were all on skateboards to blend in. We had a designated route plotted, and police escorts who brought us to the bridge and then met us on the other side. The energy was electric. I’ve never seen anything like it. Unfortunately, this scene didn’t make the final cut of the film because of length, but partaking in it was memorable nonetheless. Being only the third day of production, it gave us a good taste of what we were in for for the rest of the shoot.