Secrets of Successful Screenwriting Teams: How to Avoid Bloodshed When Writing a Script With a Partner 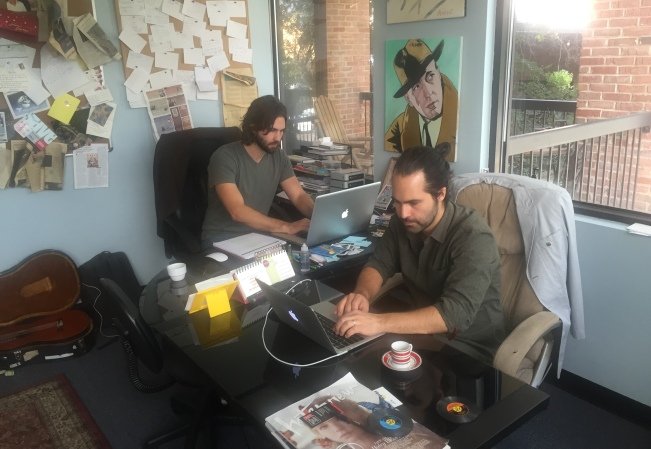 Throughout history, most writers have worked alone, whether scratching away with quills in garrets or tapping on laptops at Starbucks.

But many screenwriters have discovered that they can be more productive—and have more fun—as part of a writing team.

So what makes a writing team successful? And when you work so closely with someone on something so subjective, how do you avoid tearing your partner’s hair out when conflicts arise? To find out, I talked to some duos, both veterans and newcomers, who attended the Austin Film Festival Writers Conference in October 2016.

Finding Your Better Half

Most of the battle is choosing the right partner. Gabriel Diani and Etta Devine are a screenwriting, directing and acting team who are also engaged to be married. Their second feature, Diani & Devine Meet the Apocalypse (for which they raised $100,000 on Kickstarter), premiered at the Austin Film Festival this year.

Devine expresses a common misgiving about collaboration: “I hated working in groups in school, because there were always people in the group who didn’t want to do the work or had no interest in doing a good job.”

Her advice, then: “Be wary of partnering with someone who doesn’t elevate you.”

Don’t write with a “yes-man or –woman,” says Bradley Jackson, who collaborated on projects such as Balls Out and miniseries Crunch Time with Andrew Disney. “You want someone who won’t accept B-rate material. If I write something that isn’t up to snuff, Andrew is going to tell me, and then we’ll work to make it better.”

You’ll know from the first time you try to write with someone whether they’re doing their fair share. “I’ve written a few times with certain people,” says Jackson, “and they’re writing one page a day when they should be writing five. With Andrew, we can both churn out the same amount of pages in a day. When we say we’re going to write, we write. When we say we’re going to edit each other’s work, we do it.”

Scott Neustadter first met Michael H. Weber when he hired Michael as a summer intern at Tribeca Productions in New York. Although they’d both tried writing on their own, they weren’t happy with the results. (“I really specialized in writing lots of different crap,” says Weber.) Somehow they found that they were better together. Their credits include The Fault in Our Stars, (500) Days of Summer, The Spectacular Now and The Pink Panther 2.

“The amazing thing,” says Neustadter, “was that when we wrote together, we completed something that wasn’t terrible.” His suggestion: “Try to find people who have different skills than you, as opposed to people who have the exact same skills.”

The Holden Brothers (Josh and Nick) started writing together nine years ago, in their early 20s; they’ve since completed around 100 shorts and a feature, The Golden Rut. Back then, they were playing in a band and writing songs together, and found that “we’d get better feedback from the songs we wrote together than the songs we wrote on our own.”

Occasionally, the right partner might be under your very nose. Marianne and Cormac Wibberley are a married couple as well as the writing partners behind National Treasure, its sequel, National Treasure: Book of Secrets, and Charlie’s Angels: Full Throttle. They both attended UCLA as undergrads; Marianne got a master’s degree in film from the UCLA School of Theater, Film and Television while Cormac became a children’s programming executive at ABC.

Marianne tried to convince Cormac to write with her for a long time, though he declined, quoting his father (Leonard Wibberley, writer of both the novel and film The Mouse That Roared): “Never become a writer. It’s a whore’s profession.” In the end, though, Cormac caved. They found that they loved the challenge of trying to make each other laugh. 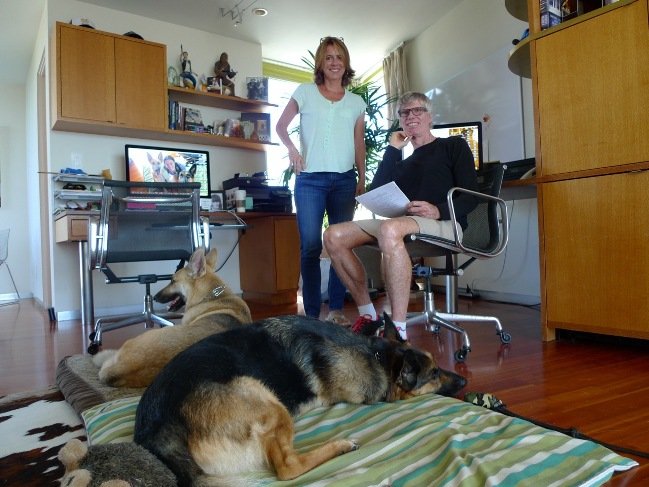 Two Heads vs. One

Writing as a team is in some ways harder and in some ways easier than writing solo. The Wibberleys listed out their preferences for working together in an email: “When you write as an individual, you have no filter. You can write and write and write and think it’s great, only to realize later it was mush. When you have a partner that you trust, dialogue, scenes and emotional arcs get punched up when you go back and forth.”

More advantages: You always have a sounding board, and a teammate in pitch meetings to scoop up the ball when you blank and bobble it. You have someone to both celebrate victories with and grouse about the stupid people who don’t “get” your work.

One big benefit of working as a team is that two people can often work faster than one.

“Theoretically you could work twice as fast,” says Devine, “although I think 33 percent faster might be more realistic.”

Neustadter and Weber wrote The Pink Panther 2 in 20 days and The Fault in Our Stars in a breakneck six days. “We didn’t hand [the latter script] in for two weeks,” says Weber, “because we didn’t want them to think we rushed it!”

Most writing duos prefer to lay out an overall story outline together as a team, and then go off and write individually.

After outlining together, Disney and Jackson split up. “I’ll take the script in the morning,” says Disney, “and he’ll take it in the afternoon. We almost make it like speed chess. It becomes a little competitive—who can write more, who can fill in more of the outline. If you’re making really good progress, like if the team is churning out 10 pages per day—don’t stop until you finish, because momentum is a precious resource in screenwriting.”

The Holdens used to write in the same room, one on the computer, the other walking around. Then they’d switch. Eventually, though, this stopped working for them. Now, they talk through an outline, then one will do a first draft. They’ll pass the draft back and forth for a few months, then do a reading with actors, then more revisions.

It’s important for at least one Holden to write at least 30 minutes per day during the week. “Over the course of nine years, it really adds up. It’s like a muscle. For the first few years, 30 minutes was all you could do. We pretty much always finish our first drafts—we don’t just quit in the middle.  But we can step away from a script for a while and come back to it.”

“We break the story as a team, figuring out the major beats to the story, breaking those down into scenes on notecards,” says Diani. “And then we split the story in half and each write half of the treatment. Then we switch and rewrite what the other has written. When we’re happy with the treatment, we will do the same with the actual script.

“We’ve adopted a timed work block technique where we work in 25-minute spurts with no interruptions, take a five-minute break, and work for another 25 minutes. It really makes the work go by faster and with greater efficiency.”

He and Devine do rejoin forces during the rewriting stage. “When we’re rewriting individual scenes, we might do it together, with one person typing and the other dictating.”

First off, there’s the obvious financial disadvantage of cowriting—having to split the money. In fact, Hollywood producers will sometimes create what are called “paper teams“—two writers who may not even know each other, forced to become a team—so they can get two writers for the price of one.

The Wibberleys list other downsides, in their experience: intense disagreements about punctuation, for one. Also, “sometimes it’s really frustrating because you think something’s great, but your partner doesn’t. Then you make a choice: Fight for your idea or trust your partner that you’re being myopic and your idea isn’t as good as you think it is. You pick your battles.”

Another thing: “Most writers have spouses or other partners they can go home to at the end of the day and complain to about their ‘stupid fucking asshole’ writing partner. Since we’re married, we can’t do that. We had to learn how to leave arguments ‘at the office’ and ‘clock out.’” (They go on long dog walks with their two rescue German Shepherds.)

As a couple, they also never felt the need to network with other people in the industry—a mistake, they now believe. “Networking is more important than we ever wanted to admit it was.”

When disagreements strike, writing partners have a couple of solutions. You could try out both parties’ ideas, and see how they look on the page. Or you could bring in a third party (like an editor or studio executive) to break the tie.

In the end, say the Wibberleys, it’s about not holding grudges. “Writing is very personal, but you have to let things go. That’s not saying you’re not allowed to be mad or have hurt feelings, but let it go. We allow ourselves a day to hold a grudge—that’s it.” MM

Lauri Donahue is an award-winning screenwriter and script consultant.

Motion Picture Production Guide 2017: 25 Resources to Get Your Film Made Faster, Cheaper, Better
Festival Wrap: Washington, D.C. Proves to Be a Capitol of Hospitality at DC Shorts 2016