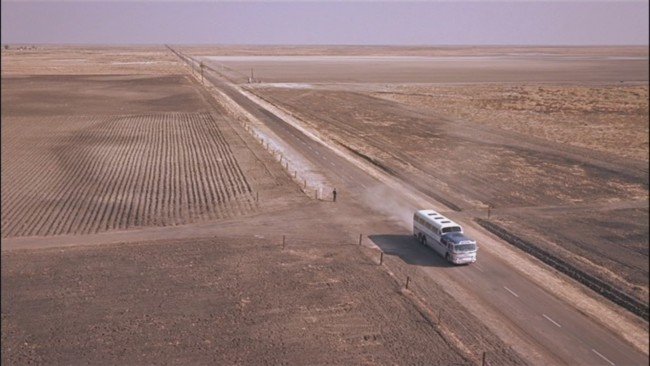 We’ve all been there–the editing room-turned-rescue center. Here’s a secret to surviving those agonizing hours: Tightening up the transitions between scenes, sequences, and acts is often the key to saving a film that just isn’t working.

You’ll start thinking about how those bigger pieces interact to create drama, like when Earth’s tectonic plates crunch together to make volcanoes.

Everything happens during scene transitions: Characters change and move, plot revelations surface, and the audience is the most engaged. Legendary editor Walter Murch once said transitions are “where the soul of the film is frequently most revealed.” That’s a good starting point when thinking about transitions—as a process of unearthing the emotional core of your story. A scene transition is change: a shift from one emotional state to another, everything in turmoil.

So what are some tactics to use when piecing together your film’s moving parts? The good news is, if you enter the editing room armed with lots of scenery shots, reaction shots, and a good pot of coffee, there may yet be hope for your struggling edit.

1. Design a Chess Board

The easiest first step is to go through all of your transitions and make sure there’s an obvious visual shift from one scene to the next—indoor to outdoor, chaos to calm, night to day, etc. These binary oppositions tell the viewer that there are two separate events to be considered in relation to one another. Not only does this provide a necessary aesthetic jolt, it also allows the audience to follow your story more seamlessly. Lack of distinction between cuts can feel like playing chess with only white pieces or squares—contrast is essential to keep track of the game. The same is true in your film. If all of your locations look too similar, you’re going to strain the audience.

Make it easy to compartmentalize the different pieces of your story. The viewer’s brain often remembers plot information based on a location in which it was revealed. For instance, if your film has one scene on a windy bridge, the audience will file that away in their mental “windy bridge” folder, and recall that bridge when piecing the story together. If, instead, your entire film takes place on the windy bridge, your audience is going to have a harder time juggling the parts.

What I’m about to tell you might be a scary thought for some readers: It’s OK to dissipate tension in your film.

The truth is, a narrow obsession with keeping things tense is a common amateur mistake. When your film continues at a sustained level of intensity, without variation, it can cause fatigue or boredom in the viewer, like listening to a song that only has one note. Give your audience a break! Remember that your tense moments will seem even tenser if they are surrounded by periods of calm.

Establishing shots can be your friend in the editing room when you’ve overloaded on tension and things are starting to feel worn out. Use them after a tense sequence has climaxed. This pause will allow your viewers to reflect and let their imaginations drift freely before the next big event.

Story clues can be planted here, but the focus should be making sure everyone sitting in the theater is synchronized into the same mood in preparation for what you’re about to throw at them. Mood-setting holds a tremendous amount of power. By changing a scene’s context, drama becomes comedy and boredom becomes suspense.

Landscapes also tie directly with the characters’ mood, either to match it or to contrast with it. Gus Van Sant’s Gerry is a great example of a setting that transforms in sync with moods. When the two Gerries (Matt Damon and Casey Affleck) start fighting, the desert becomes rugged and stormy. When they are exhausted, the same desert becomes a flat, white plane.

Establishing shots aren’t just opportunities to wow the audience with spectacular views—they’re also tools with which to tease them. The crop-duster scene in Hitchcock’s North by Northwest is an example of using the downtime at the beginning of a scene to stir up forward momentum. Hitchcock opens the scene with a 60-second wide shot of a bus dropping off Roger Thornhill (Cary Grant), who expects his adversary to show up in each passing car. The story slowly builds toward a completely unpredictable climax, borne from the uneasy inertia of the setting.

Be clever in using your establishing shots to make a visual point. Let’s say you open with a wide shot of the beach, with lots of tourists dancing around in the sun. Then, you track over to a house with the curtains drawn. A person walks by and enters the house; we follow them inside. A setup like this visually underscores the irony of the situation—that there is something suspicious going on in this beach house and the happy people outside don’t know about it.

The old edict of editing a scene is “arrive late, leave early,” but be careful not to abuse this. Make sure your audience gets to spend enough time with your hero’s important onscreen reactions. Allowing the audience to share in the reaction to a major plot event is the best way to form an emotional bond between viewer and spectator. When you add music, a seemingly pointless long shot of an actor walking away can suddenly become a tear-jerker for the audience.

Directors should never call “cut” too early, and should train their actors to keep going once the planned scene is finished. This can give you valuable options in the editing room when a scene transition needs more audience emotion.

Movement through wide expanses of geography is one thing film portrays best above all other forms of art. Take some time to think about where your hero moves off-screen between scenes. After a big moment, traveling with a character through space is a great emotional connector. If you don’t have any footage of your character traveling from one key scene to the next, consider picking it up when you can; it forms a stronger bond with your audience.

In the editing room, decide which of these journeys to show between scenes. In Garden State, Andrew Largeman (Zach Braff) rides through town on his motorcycle presumably between every scene, but we only see it at three key points. During these points the audience shares in his emotional discoveries–first of freedom, then of love, then of renewed hope.

When we think of travel in real life, we tend to think of boredom. Waiting in traffic during rush hour, sitting through a long flight—moments we’d rather forget. But these moments can be intensely captivating in a movie narrative if they are expressing a character’s emotion.

Now that you’ve pinpointed all of your key moments of tension and release, take a look at the overall rhythms of your film. Are there still some moments that have lost their pulse? Varying the length of your scenes is another way to fix a sluggish edit. Typically, scenes get shorter and shorter as a film progresses, because this inherently builds tension toward a climax.

Scene length is highly subjective, and affected by the scenes that surround it. If you put several short scenes together followed by a long scene, that long scene might feel like a natural variation. But if you precede it with a lot of long scenes, that last scene might feel even longer.

One fix to your sluggish sequence is to abbreviate it into a montage. Keep only the essential moments and add music to bridge the shift through time. Montage has a way of increasing tension and allowing the audience to look at a situation objectively.

Darren Aronofsky’s hip-hop montage style (see Requiem for a Dream) has turned into a popular transition to propel tension from one scene to the next, showing flashes of events in a rapid burst. It works well in a film like Edgar Wright’s Hot Fuzz, the rush of impressions seeming to reflect Nicholas Angel’s (Simon Pegg) OCD.

To become a true master of transitions you must come to know a tactic used by storytellers for centuries—telling a story through omission. An invigoratingly simple trick is to delete an entire scene and see if the story makes sense without it.

Guessing what has been left out of your film is innately satisfying to an audience, because it challenges their imaginations to find a solution. In literature, this is a process known as ellipsis. Psychologists call it the Gestalt Theory. Hitchcock said it best: “Drama is life with the dull bits cut out.” So cut them out, and excavate your story. MM

Jeffrey Michael Bays, MA is the author of the book Between the Scenes, published by Michael Wiese Productions and available worldwide. He has taught a workshop at the Moondance International Film Festival in September 2014.