Say Hello to the Happy Couple 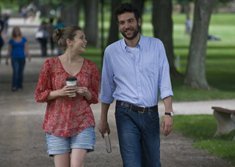 Still from Liberal Arts, written and directed by Josh Radnor and co-starring Radnor and Elizabeth Olsen, both NYU alumni.

The Sundance Film Festival ♥s New York. At the 2012 edition of the celebrated festival, which wrapped up its ten days of indie mayhem yesterday, one in three of the films screened was impacted in some way by a graduate of New York University’s (NYU) Tisch School of the Arts in the form of a director, producer, writer, editor, set designer, cinematographer or actor who graduated from the world-renowned film school.

Among the alumni whose films made waves at Sundance are Elizabeth Olsen (Liberal Arts, Red Lights), Kristen Bell (Safety Not Guaranteed), Jason Ritter (The End of Love), Andy Samberg (Celeste and Jesse Forever) and, of course, Spike Lee, whose Red Hook Summer had its debut at the fest.

The sheer amount of Sundance films to have come courtesy of NYU graduates is not entirely unexpected, as Tisch has been an Institute Associate of the festival for nearly 20 years. The pair has as a shared goal the nurturing of the innovative and creative spirit that will shape film’s future. With Sundance standing as the country’s largest independent film festival and NYU maintaining its status as one of the nation’s premier centers of undergraduate and graduate study in the performing and cinematic arts, the duo’s partnership will surely give birth to artistic, risk-taking and unique films in the years to come.

For more information about NYU’s Tisch School of the Arts, visit www.tisch.nyu.edu.

Say Hello to the Happy Couple
Supporting Global Film, One Director at a Time