How They Did It: Directing a Film in the Pacific Ocean From 5,000 Miles Away in Losing Sight of Shore

The quote goes: “You can never cross the ocean unless you have the courage to lose sight of the shore.”

That idea stuck with me throughout pre-production all the way to post on my second feature-length documentary, Losing Sight of Shore. I wasn’t going to row across the Pacific Ocean myself, but I was desperate to tell the story of the Coxless Crew, and I had to figure out how to pull it off.

The plan was, in some ways, simple: Four women were going to get in a 29-foot pink ocean rowing boat named Doris and set off from San Francisco on an 8,000-plus mile journey, with two planned stops in Hawaii and Samoa, before finishing in Cairns, Australia. They were aiming to be the first team of four to ever accomplish this phenomenal and dangerous feat—and did I mention that a component of the record they were setting (not breaking) was that they would be unassisted? That means no support boat next to them with extra food and first aid. They would be out there alone for more than nine months with no escape.

Since I wasn’t going with them, the Coxless Crew had to shoot the footage for my film on their own. All this presented a unique set of moviemaking challenges. But when I first heard about the impending journey in January 2015, I didn’t have much time to freak out: I knew the crew was leaving in only a few month’s time. I got to work on finding cameras that would be easy to use, lightweight and, if possible, waterproof. We landed on the Sony FDR-AX100 which shoots in 4K, some GoPro Hero 4s with a non-distorted lens, as well as a Zoom audio recorder, and LaCie Rugged 2TB hard drives for the women to download the footage at sea. The Sony and a small Sennheiser mic were to be used as the interview camera, mostly inside the cabin as it was not waterproof, and then the GoPros would be ideal for time lapses, shots on deck and underwater. They had two hard drives to make two copies of all the footage, and the Zoom was a back-up audio recorder in case all the cameras went down they could still capture their emotion. I knew that if all else failed, when I saw them next in Hawaii I could swap in new cameras, microphones or hard drives and not be completely screwed on footage for the whole endeavor.

Our film crew showed up to San Francisco a few days before the big departure in April 2015. We filmed master interviews with all four members of the Coxless Crew (Laura Penhaul, Isabel Burnham, Natalia Cohen and Emma Mitchell) as well as their tearful family members, terrified that their daughters were about to head off into the unknown. I captured them preparing the boat to leave as well as hearing all of the logistics of the row from their shore support, Tony Humphreys. I patiently taught the Coxless Crew how to use the cameras and the workflow of downloading and organizing their footage in the cabin. I encouraged them to think like storytellers and bring us into their experience: the good, the bad and the ugly. 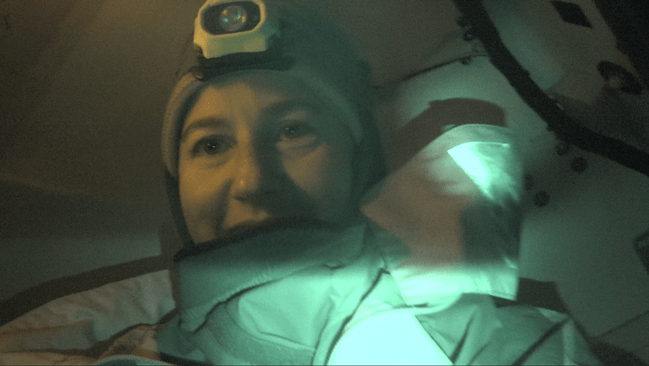 Nothing could prepare me for the feeling of watching Doris row away at 2 a.m. on April 20, 2015. It was so quiet and unceremonious, and I wondered to myself if I would have a movie on the other end of this experience. I remember shaking and feeling sick about it. I traveled home to Los Angeles and got to work cutting a sizzle, applying for grants, planning the next shoot (even though I had no idea when it would be) and tracking their progress like a hawk.

On the boat, there was a GPS tracker so every four hours or so their website would be updated with their positioning, and each day you could see how many miles they had rowed. There were also miles “made good,” meaning some days they would exert themselves for what should have been 50 nautical miles, but only 10 would be in the correct direction due to wind and currents. I have to say it is the ultimate motivator to keep raising money and keep working on your film each day when your subjects are out there in the Pacific rowing 24 hours a day, two hours on, two hours off with no complaints.

Another asset was their blog. Once a day the Coxless Crew would fire up their Iridium GO and use their limited internet access to send their blog entry to their social media manager. That meant that each day, one of the four women would fill everyone in on their progress, their feelings, their musings and their ailments (like salt sores). This blog was my lifeline during their nine-month journey. Since I didn’t know what they were shooting on a daily basis and I wouldn’t be able to see the footage for months, I could email them and comment on their blog and ask questions that related to their experience in real-time:

You mentioned you were upset in the last blog; can you talk to the camera about that?

I would send them shot lists and draw pictures of Doris dreaming up new angles and places to put the GoPros:

Tie the GoPro onto your oar and leave it there as you row.

Put the GoPro into one of the hatches and close it, then open it up and grab something out of it.

Please get cutaways of each of you looking out into the ocean. No talking!

Directing a documentary from 5,000 miles away is no easy feat. The rowers had bigger things to worry about like weather, currents, sleep deprivation and a dwindling food supply. But what I started to see is that as time went on, they began to treat the camera like a fifth member of the team. And as we became closer as friends on land (I was also there in Hawaii, Samoa and Australia), they got closer to the camera as well. They would talk to the camera like it was me, and when I would watch the footage months later, I would get chills thinking about how intimate this experience truly was. There was the physical aspect of course, but really this is a story of the power of the human spirit. The first leg’s footage was relatively surface level—the winds are doing this, the currents are not in our favor, the waves are huge—but as the journey progressed in legs two and three, it was much more about the internal struggles of the characters and how they were disconnecting with reality, for better or for worse. I had a front row seat to all of the inner turmoil as well as the stunning beauty of being in the middle of the Pacific.

Once back on land with them I would anxiously plug in the hard drives into my computer and pray that there would be any footage on them. To my complete surprise and joy, no footage was lost (except one day when they dropped the Sony into the ocean right off the coast of Samoa). Good thing I brought another one as a back-up for leg three! My biggest concern with Losing Sight of Shore from the start was how the audience was going to see them in the middle of the ocean from afar with no support boat there to act as a camera boat. All of the footage was looking great, but it all existed within the confines of the 29 feet of Doris, and that got claustrophobic quickly.

Drones were the answer.

Doris coming in to Hawaii

In Hawaii, Samoa and Australia I hired incredibly talented drone photographers to help me get as much footage as possible of the boat during those final hours rowing into land. I had them frame the boat so that only water surrounded it and I would be able to use that footage throughout the film. Sometimes our camera boat would go several hours off shore where there literally was no land in sight, so we could capture the boat in all of its blue-surrounded glory. We did multiple moves and angles. In different parts of the world the water truly looks very different, so I had a lot to choose from for the trailer and for the final film.

Some people ask if the Coxless Crew had a drone with them on the boat, or if we were in fact in a follow boat during the whole journey. That’s how I know it’s effective in the film! I don’t know what I would’ve done without the drone footage; it is such a big part of the movie.

This has been a once in-a lifetime experience and an epic story to tell. I am honored to be the director, producer and land DP for this incredible film. I have learned to take risks, to be more adventurous and to not be afraid to lose sight of shore, which I will keep with me as I move forward. The tagline of the film is: “Everyone has a Pacific to cross.” MM

Losing Sight of Shore is currently available on Netflix.

How They Did It: Surviving British Columbia Downpours and an Errant Cow to Make Even Lambs Have Teeth
Letting Sparks Fly: Sundance’s Three-Year-Old Ignite Program Gives Young Moviemakers Space to Grow