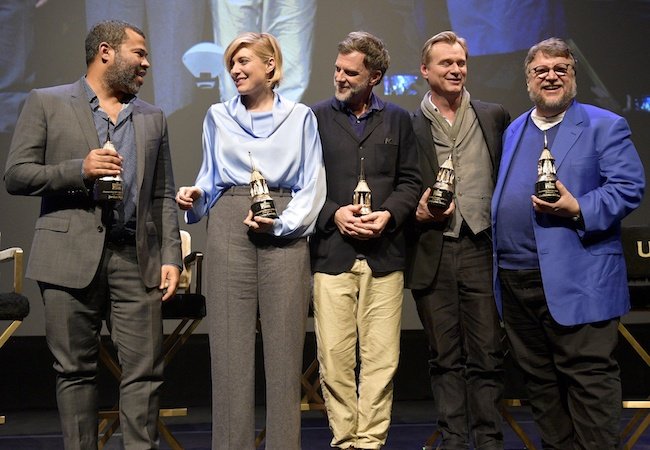 With three titans of cinema and two of the most acclaimed and promising debutants in years in attendance, it was impossible not to be dazzled by the caliber of talent that took the 2018 Santa Barbara International Film Festival’s stage at the Arlington Theatre for the Outstanding Directors of the Year Award night.

All of this year’s Oscar nominees for Best Director graced audiences with candid anecdotes about the process of making their latest films and the overwhelmingly positive reception they’ve all had. Four out of the five are first-time nominees in the category: Guillermo del Toro, Christopher Nolan, Greta Gerwig, and Jordan Peele. The fifth, Paul Thomas Anderson, was previously nominated in 2008 for There Will Be Blood.

Moderated by The Hollywood Reporter’s Scott Feinberg, the individual interviews allowed the artists to briefly elaborate on some of their works’ most enduring qualities. Keeping up with his track record this awards season, Guillermo del Toro provided many of the highlights, including a joke about INS trying to stop him from talking much longer and his dislike for small chairs. Once all five directors returned for a group conversation, each of them listed their favorite scene or element in the others’ nominated movies. Nolan gushed about watching Phantom Thread on 70mm, Gerwig reminisced about meeting Paul Thomas Anderson for the first time, Jordan Peele mentioned his admiration for the three masters present, and del Toro humorously noted that he knew all of PTA’s tricks by heart.

Besting this lineup will be a tall order for year’s to come but, for now, this moment in time yielded some unforgettable treasures in the form of lessons learned and relevant themes within the art form. Here are some key pieces of wisdom from both the established moviemakers and the rising newcomers.