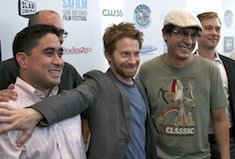 San Antonio is probably not the first city that springs to mind when you think of film festivals. It’s not Park City, Austin, or Toronto, but it’s not trying to be, either.

San Antonio is world famous for three things: the River Walk, the Alamo and the four-time NBA champion San Antonio Spurs. But soon the “something to remember” city will be recognized for a fourth institution: the San Antonio Film Festival (SAFF).

Now in its 19th year, the SAFF got its start long before founding a new film festival was the trendy thing to do. At 19 SAFF officially qualifies as OG, original gangster. Two decades is a long time in film festival years, especially considering that Robert De Niro’s Tribeca Film Festival, which seems as if it’s been around forever, was founded in 2002.

The San Antonio Film Festival didn’t have the luxury of a famous founder. Their growth has been slower due to the grassroots approach employed by founding director Adam Rocha, a school teacher by trade. Now 40 years old, Rocha did what “they” said couldn’t be done, and with the help of his family, friends, and local businesses, he has grown the San Antonio Film Festival into a destination event for movie buffs and moviemakers alike.

Speaking of movies, the 2013 San Antonio Film Festival presented an eclectic mixture of programming. There were some cool documentaries on tap such as Comedy Warriors: Healing through Humor, A.K.A. Doc Pomus and Medora, plus indie features such as the black comedy Thursday’s Speaker, and more mainstream fare like The Story of Luke and The Watchmen.

There was also a strong showing of San Antonio moviemakers at SAFF, and these local moviemakers packed the house at many screenings. The short film screenings of The Symphony of Silence (directed by Cedric Smith) and Arose the Coward (directed by Buddy Calvo) were well received and well attended. And the Friday night premiere of Sanitarium, a thriller that was shot in San Antonio and directed by three locals (Bryan Ortiz, Bryan Ramirez and Kerry Valderrama), sold out two theaters for its opening night at the plush Palladium. Not to be outdone, on Saturday Kevin and Robin Nations’s movie Champion also sold out two theaters at the Palladium. Kevin and Robin’s family film Champion, about a depressed cattle dog, secured distribution with MultiVisionnaire Pictures.

There were also a number of notable red carpet appearances at the 2013 San Antonio Film Festival by Seth Green, Robert Englund, John Glover, Chris Mulkey and Jackie Earle Haley, among others. On Friday fans camped out all day at the festival, waiting for Robert Englund to make his appearance in promotion of the thriller flick Sanitarium. Clearly, San Antonio takes its movies very seriously.

This city also takes its Tex-Mex seriously. While I was in town local celebrity Hector Rocha (Adam Rocha’s dad) took me to eat at Mi Tierra, where I put away a plate of delicious beef enchiladas. A word to the wise: When you visit San Antonio, do not pass up a trip to Mi Tierra’s under any circumstances. Their Tex-Mex is to-die-for, and their interior decoration is a glory to behold.

My only regret about the SAFF trip is that the Spurs lost to the Heat in the NBA finals. It was pretty crazy on River Walk after the Spurs lost game seven, so I can only imagine what the party would’ve been like had San Antonio clinched its fifth NBA championship. Who knows? There is always next season. Imagine that. The Spurs win their fifth AND the San Antonio Film Festival celebrates its 20th birthday. Now that would be a banner year.