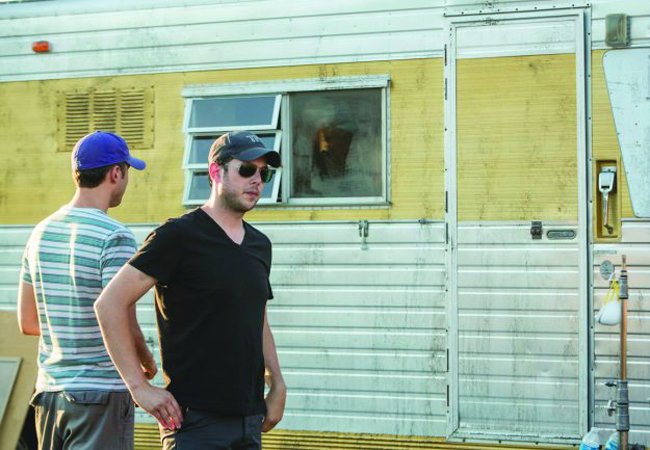 One of the most common questions we’re asked by people outside of the film business is, “What does a producer do?”

The answer is a complex one. Ever since major studios began to make fewer movies and independents became more of an industry force, the nature of the word “producer” has continued to widen. Getting an independent film off the ground, then, demands that a producer is checked in and “hands on” long before and long after you hit the set. This overview will walk you through what you need to know when making the most crucial decisions any producer will face.

To make A Crooked Somebody, we had a team of producers whose experience included films such as Wind River, Ingrid Goes West, and The Post, and who had worked together before, albeit not all teamed, as we were for this project. This allowed us to combine our talents and capitalize on already smooth working relationships. Given the difficulties, challenges, and stresses of short deadlines, compatibility is crucial to the team assembly stage of pre-production. In the end, there’s no time for internal squabbles during your shoot.

Your job as a producer starts with finding the right material. This means taking an active approach in starting with an idea or finding a book or article to adapt and pairing the right screenwriter with the material. Scour the town and try to get your hands on the best unproduced screenplays. No matter how good your production team, cinematographer, or actors are, if you don’t have first-rate material, your film will not be a success.

Ask yourself: “Does this story really grab me?” “Are there twists and turns that keep me turning the pages of the script to see what happens next?” “Has this story already been done?” Distributors, critics, film festivals, and most importantly, the public, are always looking for that new story, new twist, new material.

Create it, find it, and ultimately control it.

A Crooked Somebody co-producer Wayne Rogers braves the storm of an indie moviemaking set. Courtesy of Trevor White

Ask yourself what your dream budget is based on the material you have to work with. Is it a large movie with multiple locations, special effects, or a film that would take place entirely in an apartment?

Is your budget scalable? By this, we mean: Can your film be made in a range of budgets? You may find your dream budget is $15 million but when financiers look at the project, they won’t risk more than $5 million. Any project that can’t be scaled is much more difficult to produce. With an unscalable project, producers are forced into giving a simple “Yes” or “No” answer, rather than working within the parameters of a potential commercial success.

Financiers can be the bane of your existence but can also be decisive in achieving net positive outcomes. Any who are worth working with will primarily be looking at two things: 1. What is your budget? 2. What talent—production and cast—is attached?

In the early stages of A Crooked Somebody, we drafted a dream budget, incorporating all of our script’s needs and director’s desires. The film is set in New Mexico, so we immediately started looking at states that fit that setting’s look and feel but also had strong tax incentives, which can fill a money gap critical to green-lighting any film. Though the money promised by certain tax incentives was enticing, our team had to carefully weigh the benefits to determine whether these incentives were the best decision for our film. The important consideration in presenting this option to investors is how much money you can project your production is going to net. If you’re traveling with some key crew, cast, and other personnel, the savings may not materialize. What are the benefits of staying in your home base for production? Access to more cast, friendly rates on gear, accessible locations all must be factored in when deciding on a shooting location. Although we spoke to multiple states and created various budgets, the best choice for us was staying in Los Angeles and working without an incentive.

Though at first glance it appeared we left money on the table, on balance the net worked in our favor. Be sure to create a clear case study and presentation to your investors. Be prepared with an understanding of how different state incentive programs work and what the benefits are to shooting on location. With A Crooked Somebody, we saved a lot of money because our director and team could simply get in a car and go to set or see a location, rather than be forced to deal with the location process and costs of an out-of-state location.

The Talent and Pre-Production

So, you’ve controlled your material and developed it to a point where you think it sings. You’ve settled on a core budget. Now it’s time to find your director(s) and key cast. These elements will not only help to further shape your creative vision, but also will enable you to lock down your financing. On one hand, if you go the route of attaching an A-level moviemaker and/or star, you could make your film at a studio budget size. On the other hand, if you decide that your talent doesn’t need box office appeal to carry your film, you could comfortably scale your budget down without compromising the quality of your finished product. Indie projects will come in all sizes, and you must consider both your domestic and international financing prospects.

Often you’ll be faced with a chicken-or-the-egg scenario: You’ll want to secure noteworthy talent from the outset, but the talent wants to be sure that the project is already securely financed—that it’s “real”—before they will attach themselves to it. Expect this paradox to be a constant as you try to incorporate talent schedules, costs, locations, and your shooting schedule into a cohesive plan. We spent only six weeks casting A Crooked Somebody, but this process nonetheless required close coordination with our entire team, including financiers, to reach the most mutually beneficial solution possible.

Once your core creative team is in place and you’ve secured financing, you’ll advance to the stage of putting production talent in place. You’ll hire a line producer to create a detailed budget and schedule, and will select a cinematographer, production designer, costume designer and editor whose aesthetic and practical capabilities align with your already-determined scale and creative vision.

There’s not enough space in this article to accurately deal with the Rubik’s Cube of this process, but it pays to always remember: Be flexible. Many of your original plans will change, but there’s almost always a way to make things work.

Making the Cut: Breaking Down the Keys to Finding the Most Compatible Editor For Your Feature
Kindling Kinship: To Write an Adaptation, Build Bonds Between Your Creative Partners and Your Source Material