A River Runs Through It 25 Years Later

Norman Maclean taught at the University of Chicago from 1928 until 1973, retiring as the William Rainey Harper Professor of English. He was older than 70 when he sat down to write his first book, A River Runs Through It and Other Stories, which was a memoir of his family in Montana in the 1920s.

His acutely personal although fictionalized story focused on Maclean’s father, a Scottish Presbyterian minister, and Maclean’s brother, a supremely strong and refined fisherman who was enticed towards gambling, alcohol, vice, and violence. The novella is a series of memories, and, in the words of one pithy, sharp evaluation, an “uncanny blending of fly fishing with the affections of the heart.”

The only book Maclean published in his lifetime, A River Runs Through It was an unexpected success. In 1977 it was considered for the Pulitzer Prize for best fiction.

Twenty-five years have passed since Richard Friedenberg adapted the novella to the screen, in a film directed by Robert Redford. Friedenberg said that one of the troubles with writing a screenplay from the fundamentally autobiographical story was that of the 104 pages, 52 were composed about fly fishing. Compounding the challenge in modifying A River Runs Through It was its absence of plot.

“Norman wrote a short story very beautifully,” said Friedenberg. “The odds against making a movie were tremendous, but Bob wanted to do it.” 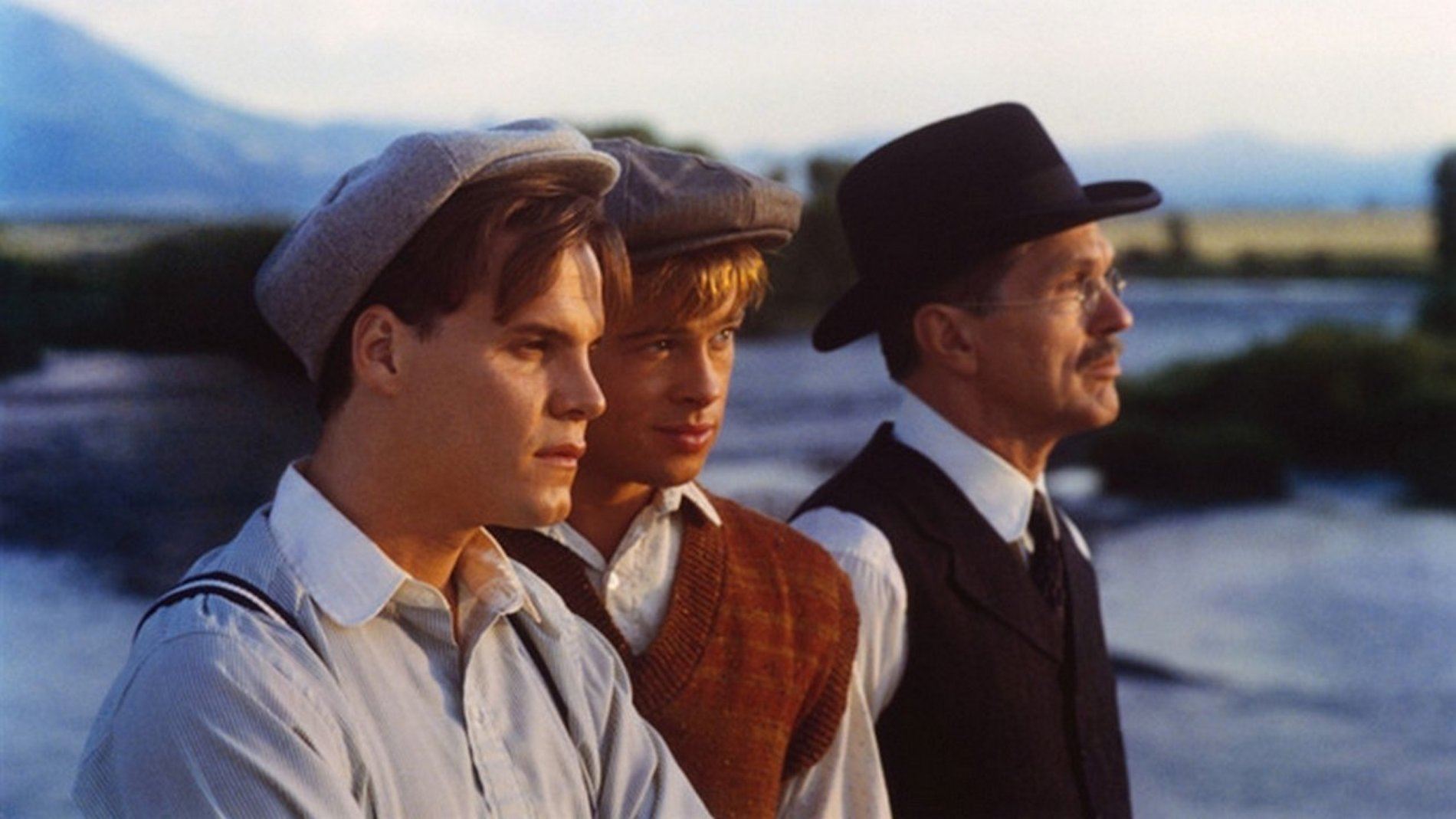 Craig Sheffer, Brad Pitt and Tom Skeritt in A River Runs Through It

Principally, the film is a mark of respect to a deceased brother, and an expression of grief—five decades after the reality—that no one in the family could have rescued him. (In the early morning hours of May 3, 1938, Maclean’s brother Paul, 32, was discovered beaten to death in a dark Chicago alley; the bones in his right hand had been fractured, and his skull pulverized by a gun butt.)

“The book was a love poem to Norman’s family,” director Robert Redford told the New York Times. “They were a deeply loving family, but the members didn’t understand each other. Their lives went into that dark area when the questions become: How does one ask for help? How does one give help? What part of oneself does one give? All these questions are rolled into the big question of love and helping and understanding one another. Those are the questions that interested me.”

Friedenberg said he condensed the story into a shorter time period to render the dark side of Paul Maclean that “led him astray and was ultimately very deadly.” Through interviews with Maclean, and by reading letters the author wrote decades ago to the woman he married, Jessie Burns, from Wolf Creek, Redford inserted details from the Macleans’ lives not present in the book. Redford also employed narration to keep the author’s voice—a central element—in the film.

Norman Maclean was born in Iowa, Dec. 23, 1902, the son of Presbyterian minister Dr. John Norman Maclean. In 1905, the family moved from Iowa to Montana and settled in Missoula. The Rev. Maclean served as pastor of the First Presbyterian Church in Missoula for 17 years. Both Norman and Paul would learn that fishing was a fine art, “performed on a four-count rhythm between ten and two o’clock.” The Maclean family, which included several sisters, moved to Helena by 1925, where the Rev. Maclean had accepted the position as executive of the Montana Presbyterian Synod. Paul Maclean would also begin his journalism career there.

The similarity between Norman’s story with Redford’s own “Scots-Irish heritage” was also attractive to the filmmaker.

“My father, while full of good humor, could be strict and stern, uncompromising and stubborn. If you did the wrong thing, silence was often your punishment,” Redford said to the Chicago Tribune in 1993. “This book was a part of my life before I even read it. Lots of its elements were of interest to me: time, memory, love, understanding, bonding, the role of nature and how it shapes our lives.”

Actor Tom Skerritt, who portrayed Maclean’s Presbyterian minister father in the film, saw the part as a reflection of his own father, a man who loved his children but could never show them that love overtly and freely. The reverend had to look to Montana’s fishing holes to attain the emotions he was unable to express, hidden beneath the rocks of the flowing waters.

Skerritt said his father “had that same Anglo-Saxon stiffness and unwillingness to display affection. I cannot remember my father ever being affectionate except for giving me a half dollar once and patting me on the knee when we were driving in the car. But he never gave me a hug and I never heard him say, ‘I love you.’ But I knew he loved me.”

“In retrospect, “added Skerritt, now 84, “much of his behavior could be attributed to Post-Traumatic Stress Disorder condition from World War I. He was emotionally contained and unstable within himself and distant from PTSD, and on top of that, he had the Protestant reserve. He never really knew who he was. I was able to draw upon this experience and replicate his behaviors to some extent. My family would often take off fishing trips in areas around the Great Lakes (he was born in Detroit) and, my father was an odd duck, and you had to be careful about catching fish. I would be in one boat and he in another with friends, on vacation, and I would be having a lot of good luck, and he saw that, and he was getting very upset. It was a strange thing. To have to curb your own success so your father wouldn’t feel slighted or angry, and he often did, and that was the PTSD.”

The foremost obstacle in making the film was Maclean, a hard-nosed man cynical of Hollywood and actors. He had already snubbed William Hurt when the Oscar-winning actor arranged to meet Maclean for a day of fishing and showed up late with a couple of aides—but no fishing license. Hurt obtained a license, and he and Maclean were said to have shared a pleasurable day on the river. But upon leaving, Hurt asked Maclean: “Am I a good enough fly-fisherman to play your brother?” And Maclean replied: “Well, Bill, you’re a fine fisherman, but not good enough to be my brother.”

Redford visited the tenacious Maclean a number of times to build a rapport of trust. Redford and Maclean fished together and exchanged letters. The old author was softened by the strength of the actor-director’s conviction.

In an interview with the Los Angeles Times in the 1990s, Redford said, “The Montana guy and the University of Chicago guy—they’re both very tough traditions, in their own ways. I respected him enormously. And we worked hard at building trust. I didn’t know him; he didn’t know me. Finally, the trust is what did it.”

Director and the writer ultimately made a pact: Redford would commission a script and Maclean could deny it. But if Maclean approved it, he was to move aside and let Redford make his movie with no interference. Maclean observed the first process of the draft being made and once he was satisfied with Redford’s vision, he respectfully resigned to the shadows.

“This film was not trying to be a Montana picture book,” said Oscar-winning cinematographer and director of photography for the picture, Philippe Rousselot. “Not because we don’t like it. But because it has been done before. It is a much more intimate story between two brothers. The goal of this film was not to bring more tourists to the rivers of Montana, and it’s not telling people you should fish. But it’s telling something about the relationship between brothers and members of the same family.”

Redford scouted Missoula for a few days in mid-March 1990, once showing up at Worden’s Market for lunch. “We wanted Missoula to play Missoula,” said production manager Allen Alsobrook, “but, unfortunately, it’s gotten so modern it would’ve been an impossible task to make it 1911.”

Instead, Livingston was transformed into a town of replica storefronts constructed over Callender Street. Paved roads were covered with gravel; horses and buggies replaced vehicles. Livingston mothers with day jobs had the opportunity to dress up as 1920s prostitutes and solicit customers while tilting over a balcony. The Maclean house interior scenes were shot at the Livingston Civic Center while the “real house” was used for outdoor scenes.

A River Runs Through It earned an Academy Award for best cinematography. The splendor of the film has catalyzed undying interest in the state of Montana, without a doubt attracting visitors to the state from all parts of the world. A 2006 University of Montana study found state tourism swelled “from 2 million visitors in 1988 to 10 million in 2005.”

Perhaps most importantly, the film drew attention to the state’s undermined rivers. The Blackfoot River, the river revered by Maclean in his book, was rebuffed to portray itself in the movie in part because of blight and encroaching development. (The story was set on the Blackfoot River, but a stretch of the Gallatin River is where director Redford filmed Pitt, Skerritt and Sheffer.)

“Norman’s fishery (the Blackfoot River) had gone through tough times,” said director Patrick Markey in 2010. “Now it’s a viable fishery again. The film was maybe the impetus to get that done.”

Still, Redford told Newsweek in 1995 that he was “ambivalent” that Maclean didn’t live to see it. “Part of me is sorry he couldn’t have the experience, the satisfaction, assuming I did a good job,” said Redford. “On the other hand, it might never be a good job as far as he’s concerned.

You seldom satisfy a writer who has given up a book for a film. There are things he wrote that aren’t there. There’s going to be a different face on a character. It drives writers crazy, because they see the book being taken away from them.”

Octogenarian actor Tom Skerritt, who has appeared in more than 40 films and more than 200 television episodes, in his career, said in a phone interview earlier this week that A River Runs Through It is “a significant film in everyone’s life who has gone to see it.”

“I am humbled to have been a participant in something that still moves people in a positive, important, and deep way,” said Skerritt. “It’s one of the few films I’ve been in that I’ve seen more than once, honestly. I’m moved on a different level each time I see it, moved by the characters. The storytelling is the most engaging, and you feel it for them.” MM