Rick James Avoided the Manson Murders Because of a Hangover 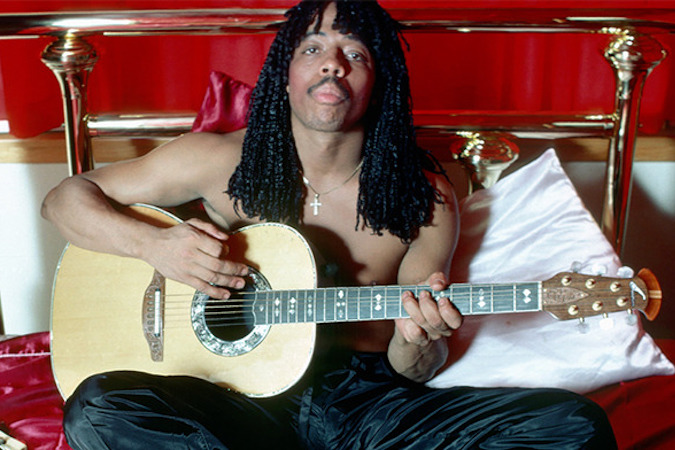 One of the wildest Rick James stories in the new documentary Bitchin’: The Sound and Fury of Rick James is how the then-struggling musician avoided the Manson murders that killed the pregnant Sharon Tate and the guests at her Cielo Drive home — including James’ friend, Jay Sebring.

The doc, now out on Showtime, understandably doesn’t go too deeply into the Manson murders, which have spawned countless other films. On Aug. 8, 1969, Charles Manson’s followers broke into the home Tate shared with her husband, director Roman Polanski. They murdered her, Sebring, Tate’s unborn baby, and Abigail Folger, Wojciech Frykowski, and Steven Parent.

Quentin Tarantino’s Once Upon a Time… in Hollywood offered one alternate reality of what happened on that terrible night. Bitchin’ invites us to imagine another. And the 2014 Rick James memoir, Glow, goes into far greater detail. The book was completed after the singer’s 2004 death by author David Ritz, who appears throughout Bitchin’, directed by Sacha Jenkins.

Rick James arrived in Los Angeles in the late ’60s after a brush with fame while living in Toronto. He and Neil Young had scored and lost a Motown Records contract with their Toronto-based blues-folk band The Mynah Birds. (Yes, that Neil Young — you can read that story here.)

Young was one of the first people Rick James met up with in Los Angeles, reuniting with his old bandmate at Young’s “log cabin” up in the Hollywood Hills, as James explains in Glow. He soon made many other friends in Young’s circle, including Stephen Stills, Young’s bandmate in Crosby Stills, Nash and Young.

One night, James recalled, Stills didn’t want to take his girlfriend, a woman Young nicknames “Perfect,” to a fancy party, because Stills was “fed up with that Hollywood crowd.” So he asked James to take her instead. (This was a mistake, James explained later — Perfect later hooked up with Sebring, and eventually with James. But again, that’s another story.) 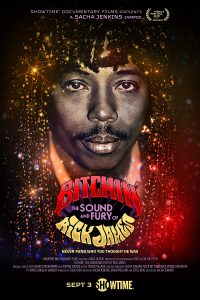 Bitchin’: The Sound and Fury of Rick James recounts how he survived the Manson murders.

The party’s host was Jay Sebring, a celebrity hairstylist and friend (and former boyfriend) of Sharon Tate.

“Jay saw that me and Perfect were the ideal party people and a week later invited us back,” James recalls in Glow.

This began a close friendship.

“In my early California adventures, Jay was probably my most loyal and supportive friend,” James says in the memoir. Sebring often visited James and his ladyfriend, Seville, and never failed “to leave us with a little weed or cash to cover that month’s rent. He was a cat you could talk to — a big-time music lover and a super-hip patron of the arts.”

One afternoon, James says in Glow, Sebring came to his home and invited him to a “big party” that Sharon Tate was hosting at her and Polanski’s home on Cielo Drive in Benedict Canyon. But James says he was so hung over that he went back to sleep. Later, Seville reminded him about the party.

“She really wanted to make the scene,” James recalls in the memoir. “I did too, but my temples were throbbing. Usually a couple of aspirins are all I need. In this case, though, the headache wouldn’t go away.”

James eventually mustered the strength to “put some party clothes on,” but then his headache returned, he went to lie down — and he missed one of the most horrific murder sprees of all time. He recounts in the book how he woke up the next morning or the morning after, went to buy some coffee and milk, and saw the Los Angeles Times headline “Sharon Tate, Four Others Murdered.”

He was devastated by the loss of his friend, and shocked that he had almost attended the same get-together.

“I loved Jay. It was only the headache that stopped me,” he recounts in Glow. “Why? Why would I get a headache at that moment? Why was I spared when a good guy like Jay wasn’t?”

He called his mother, who told him: “God spared your life for a reason.”

There’s no telling how the Manson killings might have turned out differently if Rick James had attended the get-together at Cielo Drive. In his 1974 book Helter Skelter, Manson prosecutor Vincent Bugliosi laid out his argument that Manson had ordered his followers to kill rich Angelenos in hopes of spurring a race war. It’s hard to imagine how killing a Black party guest, alongside the white ones, would have helped Manson’s bizarre narrative. Not that Charles Manson was the most logical person. And journalist Tom O’Neill, in his book Chaos: Charles Manson, the CIA, and the Secret History of the Sixties, has poked holes in the race-war motive.

In the decade after the murders, James would go from frustrated attempts to break into the music industry to becoming a Motown hitmaker. His biggest album was 1981’s Street Sounds, which included the hits “Super Freak” and “Give It To Me.”

But James’ partying took a dark turn. And while he didn’t become a victim of violence, he did become a purveyor of it.

He became badly addicted to cocaine, and in 1991, as Bitchin’ recounts, was accused of holding a woman hostage, forcing her to perform sex acts, and burning her with a crack pipe. While on parole, he was accused of kidnapping and beating a second woman, also while on cocaine. James was found guilty of one assault and pleaded guilty to another in 1994, and served more than two years in prison.

Rick James was found dead at his Los Angeles home in 2004. The cause of death was a heart attack, and he was found to have had nine different drugs in his system, according to the Los Angeles Times.

Bitchin’: The Sound and Fury of Rick James, is now on Showtime.

How We Shot Edge of the World Amid Jungle, Floods and Crocodiles
Notable Hollywood Deaths of 2021, From Michael K. Williams to Ed Asner