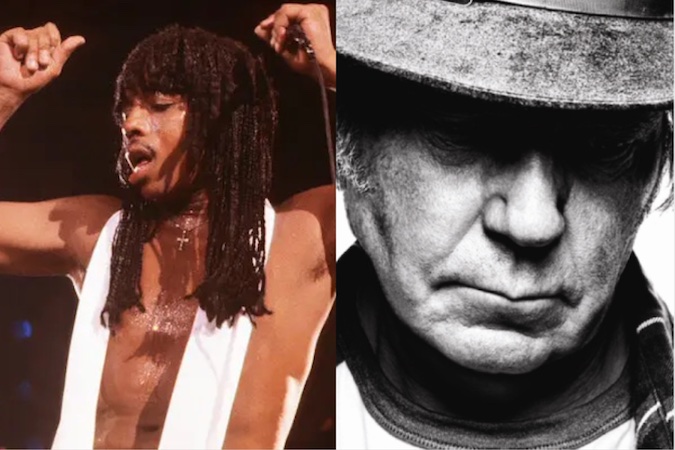 The Rick James documentary Bitchin’: The Sound and Fury of Rick James, briefly touches on James’ stint in a band with Neil Young called The Mynah Birds — one of those rock collaborations that sounds too weird to be true.

Anyone with a basic knowledge of popular music probably thinks of James as the funk-driven, volatile mastermind of tracks like “Super Freak” and “Mary Jane,” and Neil Young as the earnest architect of ballads like “Heart of Gold” and protest anthems like “Rockin’ in the Free World.”

But their musical tastes melded beautifully in 1966 Toronto, where James went to avoid being drafted into the Vietnam War, and immediately fell into a thriving Canadian music scene that spawned Young, Joni Mitchell, and Gordon Lightfoot, among others.

James recounted his Toronto years in his magnificent 2014 memoir, Glow, which was completed after the singer’s 2004 death by author David Ritz, who appears throughout Bitchin’, which was directed by Sacha Jenkins and debuts Friday on Showtime.

James was born James Ambrose Johnson, Jr., and grew up in Buffalo, New York, just 100 miles from Toronto, across the U.S.-Canadian border. As he explains in Glow, he lied about his age to enlist in the Navy at the age of 16, but soon decided it was a mistake. After reporting to Rochester to be shipped over to Vietnam, he decided to instead buy a one-way ticket to Toronto — and went AWOL.

Also Read: Yes, Rick James Avoided the Manson Murders Because of a Hangover

He set out for Yorkville, which he had been told was “the Greenwich Village of Toronto,” according to Glow. He loved the coffeehouses, clubs and strips bars, but was soon confronted by three drunk Americans who accused him of being a draft dodger and called him a racial slur.

Fortunately, a group of Canadian musicians came immediately to his aid. They would later become famous as members of The Band. (Martin Scorsese chronicled what was billed as their last performance in his 1978 documentary The Last Waltz.) 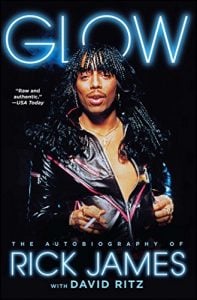 The Rick James memoir Glow, written with David Ritz, who is featured in the new Rick James doc Bitchin’ on Showtime.

They brought James into the Toronto music scene, where he went by the name Little Ricky, in part to evade arrest for escaping Vietnam. He soon met a budding manager named Colin Kerr, who was impressed with his musical talents and invited him to his cafe, The Mynah Bird.

This led to the creation of the band The Mynah Birds, featuring “Little Ricky” on lead vocals. Inspired by The Beatles, Kerr promoted the group heavily, and they gained local buzz.

At first, they were basically an R&B band, and James says in Glow that he stood out “as an authentic R&B singer living in a city where white musicians were striving to play authentic R&B. That added to my status.”

But James wanted to change the group’s sound. As James tells it, his friend Joni Mitchell and his Mynah Birds bandmate, Bruce Palmer, both recommended adding then-unknown Toronto native Neil Young to the Mynah Birds, because he could help the group attain a “blues-based folk rock” sound.

“Like most of the other white musicians in Toronto, he was into Black music,” James says of Young in Glow. “His singing was a little strange, but his facility on the guitar was crazy. He got all over those strings and showed me some shit I’d never seen before. Neil helped reshape the Mynah Birds into the band I’d been hearing inside my head.”

Neil Young was equally complimentary of Rick James — who went by Ricky James Matthews in the Mynah Birds — in his 2012 memoir, Waging Heavy Peace.

“Ricky James Matthews, as he was called then, was our lead singer, and he was known as the Black Mick Jagger. He sang his ass off.”

They moved in together, and played a lot of Rolling Stones covers. But Waging Heavy Peace also includes some grim foreshadowing of James’ fate:

“Living with Rick in a basement  apartment… I became introduced to other drugs,” Young writes. “I was trying amphetamines and smoking a little hash. Looking back, I could have done a lot deeper. Luckily I didn’t get too far into the stronger drugs.”

The Mynah Birds soon parted ways with Colin Kerr and joined up with a new manager, Morley Shelman, and financial backer John Craig Eaton. James describes in Glow as “two rich kids in love with music.”

Motown signed the group to a six-year contract and began grooming the band to be Motown’s next big thing. James and Young first met Motown luminaries like Marvin Gaye, Smokey Robinson and The Temptations.

“Smokey Robinson dropped in and was helping us, and some of the Four Tops would come in and back up our vocals, standing behind us as we sang,” Young writes in Waging Heavy Peace. “They made us sound cool. Everything was going great! It was just a big family feeling around Motown.”

Not necessarily says James: He recalls Marvin Gaye telling him that Motown was “survival of the fittest” and “a throat-cutting contest.”

Either way, at the start of 1967, The Mynah Birds were poised for success. But after a dispute over money, James says in Glow, Shelman, the group’s manager, “ratted me out” to the U.S. government — and the Motown contract disappeared.

“Neil Young and Bruce Wagner, both great guys, stayed loyal,” James says in Glow. “They didn’t kick me out of the band.”

But James, taking advice from his mother, turned himself in.

Two days after James was busted, Young writes, Shelman “OD’d on some heroin he had bought with our advance money. The cash was gone, and so was our manager. We went back to Toronto and the band broke up.”

Curiously, James remembers Shelman’s fate differently: He says in Glow that Shelman was “killed in a fiery motorcycle accident.”

After much more draft-related drama — including breaking out of the brig in the Brooklyn Navy Yard — James was able to resolve his issues with the U.S. government.

Neil Young and Bruce Palmer moved to Los Angeles, and joined Buffalo Springfield, best known for the iconic ’60s anthem “For What It’s Worth.” Young later joined Crosby, Stills, Nash and Young, which also included his Buffalo Springfield bandmate, Stephen Stills. Soon after, Young became known as one of the greatest rock songwriters as a solo artist, backed by his group Crazy Horse. He remains one of the most revered rock artists of all.

Rick James also moved to Los Angeles, but struggled for years. Still, Neil Young had his back. He recalled a reunion near the end of the ’60s when Young welcome him to his “log cabin in the hills,” wearing “full Indian regalia.” 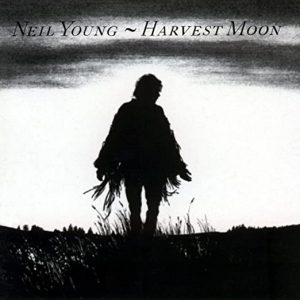 Neil Young in what Rick James might describe as “full Indian regalia” on the cover of 1992’s Harvest Moon.

“We hugged like long-lost brothers and shot the shit for hours. … Neil and I had great rapport — two wild artists who understood each other on the deepest level,” James says in Glow.

The Mynah Birds also had a direct connection to James’ eventually success. In the mid-70s, after he recorded demos of the album that would become his breakthrough success, Come Get It, in Buffalo, he went back to Los Angeles to shop it around to record labels. He was determined, he says in Glow, to sign with anyone but Motown.

But then he had a chance elevator run-in with a Motown producer, who greeted him with, “I’m Jeffrey Bowen. I met you during the Mynah Birds days in Detroit.”

After some haggling, James agreed to sign again with Motown, after more than a decade of trying to break into music. Come Get It was a hit, and James’ had a strong run that peaked with the massive success of his 1981 album Street Sounds, which included the hits “Super Freak” (featuring The Temptations) and “Give It To Me.”

“You smoke a joint and write a song and next thing you know you’ve got a check in the mail,” he told People Magazine in 1982.

But he had relentless drug problems. In 1990, he received an unexpected windfall when MC Hammer sampled “Super Freak” for his hit “U Can’t Touch This.” But just a year later, his reputation hit its nadir when he was accused of holding a woman hostage, forcing her to perform sex acts, and burning her repeatedly with a crack pipe. While out on parole, he was accused of kidnapping and beating a second woman, also while on cocaine.

He was found guilty of one assault and pleaded guilty to another in 1994, according to the Buffalo News, and served more than two years of a five-years-and-four-months prison sentence.

In 2004, he came back into the public’s consciousness thanks to a Chappelle’s Show sketch featuring a Rick James story from Charlie Murphy. (James had worked with his brother, Eddie Murphy, on a 1985 album that spawned the hit single “Party All the Time.”) It included Chappelle delivering the catch phrase, “I’m Rick James, bitch!” that inspired the title of Bitchin’.

James was found dead at his Los Angeles home in 2004. The cause of death was a heart attack, and he was found to have had nine different drugs in his system, according to the Los Angeles Times.

Since you’re going to go looking for it anyway, here’s Rick James’ “Super Freak,” recorded about 15 years after Rick James and Neil Young collaborated on The Mynah Birds…

… and “Rockin’ in the Free World” by Neil Young, released about 23 years after his Mynah Birds collaboration with Rick James.

Bitchin’: The Sound and Fury of Rick James, is now available on Showtime.

Main image: Rick James in Bitchin‘ and Neil Young on the cover of Waging Heavy Peace.

This story was originally published on Sept. 2 and has been updated with more details about Morley Shelman and Rick James signing with Motown in the 1970s.