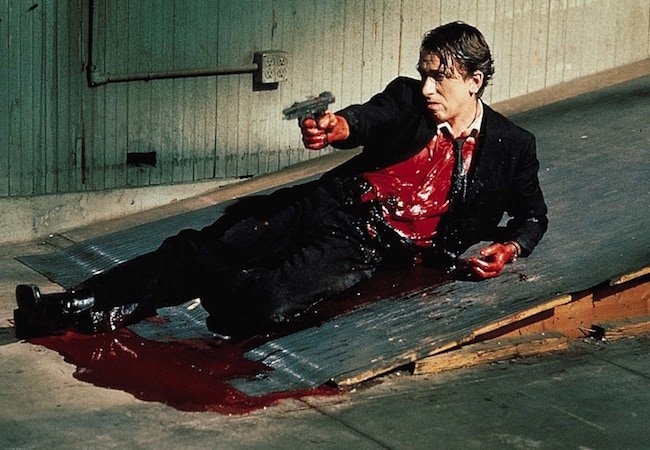 24 years ago today, Reservoir Dogs, the debut from Quentin Tarantino, was released, bringing with it a vicious wake-up call to the crime genre and the earth-shaking entrance of one of this generation’s strongest voices.

Even today, Reservoir Dogs holds up as a primal, intense and visceral example of moviemaking in its genre as well as an intriguing treatise on the ability of violence to turn our stomachs and stir our souls. Looking back, what stands out most about this low-budget heist thriller is how well it fits into Tarantino’s filmography as a whole, as well as how it was able to break through to the mainstream as a successful debut.

Here are three things Reservoir Dogs reminds us about the challenges of portraying on-screen violence, for when you prepare to shoot your very own indie bloodbath.

No Pain, No Gain

Reservoir Dogs looks at violence through the lens of pain—pain as an emotion and pain as a reaction. Though it is a similarly reflexive film to the rest of his filmography, the first Quentin Tarantino venture into moviemaking is much more contained than the following films. Each of his other works is concerned with violence as an explosive means of communication, both within the world of the film and which each and every member of the audience. In Reservoir Dogs, violence is a wedge between us. This 90-minute bloodbath works as an analogy for the lack of communication amongst these twisted characters as well as communication between the world of the film and the collective consciousness of the audience.

In one way or another, all of Tarantino’s films are concerned with the effect that violence has on the emotions of the viewer. Reservoir Dogs remains the only one that fully engages with the discomfort of the audience, making each member squirm in their seat and avert their eyes. As the final scene cuts to black, we feel battered and bruised, aching with each punch and shot that the characters have taken. This works incredibly well, and especially on such a small scale, because it affords the film a brutal and effective efficiency that Tarantino has sacrificed in recent years in favor of a more Grand Guignol approach.

As Tarantino’s career has progressed, he has become more and more concerned with the nature of on-screen violence and less concerned with the place of violence in the society that surrounds us. With films like Django Unchained, Inglourious Basterds and The Hateful Eight, the famed director has flung himself full-force into the irresponsibility of violence, examining how our reactions to his blood-soaked revelry force us to take a long, hard look at ourselves. Watching gloriously operatic displays of horrific violence brings about the worst of our own desires and puts our faults on display for all to see.

Though the violence in Reservoir Dogs feels quite different from the rest of his films, it is actually operating in much the same way. Every scene in which Tim Roth’s Mr. Orange is lying on the hard pavement and slowly bleeding out can be deeply felt by all who are watching. The famed sequence in which Mr. Blonde unleashes a sadistic act of violence on a captive cop toyed with early audience’s emotions so much that many moviegoers swore that they saw the actual act of violence on screen. In actuality, however, Tarantino averts our eyes from the image—with half of us imagining the grisly sight in our mind and the other half secretly wishing that they could be seeing everything. This allows for the film to work in a self-contained manner and, in its depiction of violence, it reaches very different heights from any of Tarantino’s other works.

The infamous debut also accomplishes much of what various imitators failed to catch on to. One of the most immediate of these “copycats” came from Roger Avary, Tarantino’s collaborator and co-writer of True Romance and Pulp Fiction. His directorial debut, Killing Zoe, is alternately disgusting and grimly entertaining, two adjectives that can be used to describe Reservoir Dogs; however, Killing Zoe lacks the impact of Reservoir Dogs because its ambition exceeded the grasp of its filmmaker. It wants to be a statement of violence, a treatise on sexuality and an entertaining crime thriller but it buries itself in excess, forgetting to treat each facet with the respect that each should be afforded. Reservoir Dogs treats its violence with respect and restraint—as a presence that drives the story and thematics but never threatens to overtake the emotions of the characters and the overall plot dynamics. A recent indie production that borrowed from the Reservoir Dogs book of violence is Jeremy Saulnier’s Green Room. Pitting neo-Nazi skinheads against a punk rock band, Green Room transcends its exploitation trappings. Saulnier’s film is gritty, brutal and disturbing, each of its moments of violence landing like a jab to the gut or a knife to the side. Like Reservoir Dogs, Green Room has an undercurrent of dark humor that adds to the entertainment value but it never forgets to use violence in smart, potent and eye-averting doses.

Another important facet of Reservoir Dogs is how it stays true to the Quentin Tarantino vision, albeit on a smaller scale. As Quentin Tarantino later stated in an interview: “Violence is the best way to control an audience.” We don’t want to watch but we feel compelled to, both out of respect for the director’s vision and a perverse fascination with violence. The puppet-master not only controls the puppets but also watches their contortions, fascinated by what each flick of the wrist will do. With Reservoir Dogs, Tarantino gets these manipulations just right, giving each moment of agony the correct weight while also maintaining the self-reflexive quality that he would later develop further. As we watch Michael Madsen’s Mr. Blonde pour gasoline over a captured cop, the torment feels mutual between the purveyor and the partaker. We become more fascinated as we are more repulsed. The perfect mix. MM

Three Trembling Cities, From Scene to Screen: The Process of Bringing a Scene To Life
“It’s A Statement”: Director Ewan McGregor and Jennifer Connelly Talk Politics and Parenting in American Pastoral