Yes, That Red Balloon Scene in A Journal for Jordan Really Happened 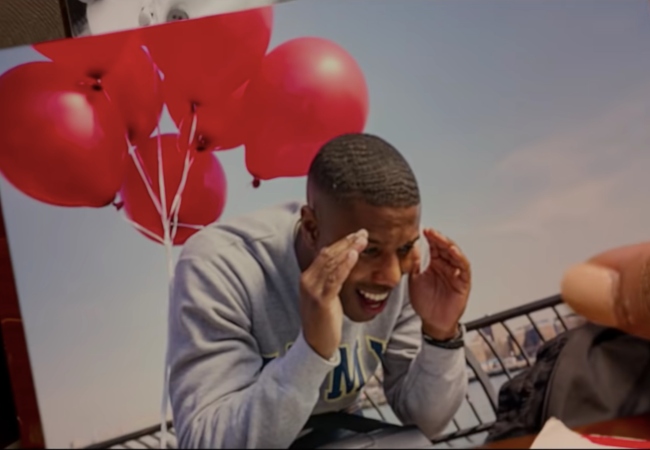 If you’ve seen A Journal for Jordan, then you’ll remember the scene when a bunch of red balloons float by Dana’s window, prompting baby Jordan to say, “Peekaboo, daddy.”

The new film was directed by Denzel Washington and stars Chanté Adams and Michael B. Jordan as Dana Canedy and her late husband, First Sergeant Charles Monroe King, who leaves behind a journal of fatherly advice for their son, Jordan, to read as he grows up.

In the film, Dana (Adams) takes a photograph of Charles (Jordan) posing next to their son while holding a bunch of red balloons. When she sees them float by the window that day following his death, she believes it’s Charles sending them a message from the afterlife.

The touching moment wasn’t in Canedy’s memoir that the movie is based on — but screenwriter Virgil Williams, who adapted the script from the book, said Canedy confirmed to him that the moment happened in real life.

“That red balloon thing, that really happened. That was not an invention,” Williams told MovieMaker ahead of the film’s theatrical release. “That really happened to Dana. It’s not in the book, but it’s something that she told me and Denzel [Washington] about. And I was like, ‘That’s going in the movie.'”

Williams described how the moment happened in real life.

“She was sitting with Jordan, and all of a sudden, that boy said, ‘Peekaboo, daddy,’ and she was like, ‘What did you just say?’ And he was like, ‘Peekaboo, daddy.’ And she looked at what he was looking at, and a bunch of red balloons float by the window. And her knees buckled. True story,” Williams said.

Williams said that there were other potential spirit messages from King that took place during the making of the movie.

“There have also been sightings of deer. When they went to go visit with Jordan — Dana went to go visit his grave — they spotted a family of deer. And then what happened to Denzel when he was scouting Arlington [National Cemetary] and they were trying to decide where to shoot — he saw a family of deer and he was like, ‘That’s where we’re putting the camera.’ So these things happened a lot on this movie,” Williams said. “Whether you believe in them or not, it doesn’t really matter to me, but I do. I think they’re really freaking cool.”

A Journal for Jordan is now playing in theaters in the U.S.