“Write What You Know”: Michael Connors on Allegiance’s move from short to feature film 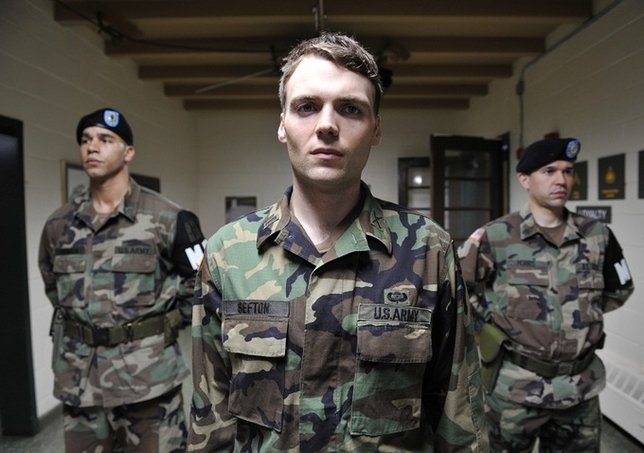 Writer/director Michael Connors’ Allegiance (Working Title: Recalled), based on his award-winning 2006 thesis short of the same name, follows Lieutenant Danny Sefton (Seth Gabel, “Fringe,” “Dirty Sexy Money”) as he helps a fellow soldier go AWOL so he can visit his sick son before being deployed to Iraq. Here, Connors, who himself served in the Army and was recalled to fight in Iraq mere weeks before the scheduled shoot dates for his original short, writes about Allegiance‘s unique path from short film to feature.

Write what you know. The inspiration behind my short film Allegiance, a fictional story inspired by my experiences in military, ended up hitting much closer to home than I would have liked.

September 2001: I had just completed four years as an officer in the U.S. Army and was starting the grad film program at Columbia University in New York City. I had resigned my commission in June of ’01, and a week into my first semester at Columbia the 9/11 attacks came. I figured I’d have to put my desire to make movies on hold and head back into the Army. The call didn’t come, and I continued on in film school, watching many of my friends who stayed in receive orders to deploy to Afghanistan and then, in 2003, Iraq.

Developing an idea for a thesis film ends up being way more stressful than it should. The pressures of the “calling card”—packing everything you can do and everything you’ve learned into 10 to 20 minutes—can sometimes overwhelm a film student and make them second-guess almost every idea that pops into their head. The best piece of advice that I heard, and one that I took to heart, is to define yourself as a filmmaker by your experiences.

For my thesis short I decided to fuse one of my most interesting experiences—one of my own soldiers asking me for help to go AWOL—with the current state of the military, overstretched in Iraq and Afghanistan. I centered the story around a New York National Guard unit, loosely based on a unit I served with from 2000 to 2001 in Jamaica, Queens, on the night before their deployment to Iraq. The unit I served with was comprised of real New Yorkers—citizen soldiers—who were called up in 2004 for a long, dangerous combat assignment in Iraq.

I wrote the short, cast it and was a few weeks away from shooting when I got called back into the Army.

It was surreal trying to explain to people that I was making a film entitled Allegiance, about a group of soldiers called up to go to war, when I had just gotten the call myself. Did I predict the future with my script? Did the Army get a hold of it and decide to screw with me? My orders were to report back to Fort Benning, Georgia in 60 days for another two years of active service—with at least one year in Iraq. I had barely enough time to finish shooting, but I decided to shoot anyway despite not knowing where I’d be in two years and when I’d get a chance to finish the film and graduate. It was an interesting experience on set—creating a fictional world that was soon going to become my own reality.

After I finished shooting, something bizarre happened: I had applied for a six-month extension on my orders to finish my thesis and my degree, and the Army gave it to me. During that six-month window the program I had been activated through, the IRR (Inactive Ready Reserve)—or, as the press called it, the “backdoor draft”—was shut down because of its political unpopularity. Two weeks before I was to report the Army called and notified me that I was no longer required to serve. They asked if, instead, I’d like to volunteer.

As an opponent of the war, I thought the decision to say no would be easy—but it was not. Many of my friends who had stayed in were already on their second and third combat tours. I was torn by a sense of guilt and ultimately decided not to go.

I finished the short and graduated. As I began the festival circuit and told people the events leading up to and surrounding the short film, I realized I hadn’t told the whole story. I was only scratching the surface of this experience. Everyone who saw the short kept asking me what happens next—so I began writing the feature version.

As an ambitious young filmmaker coming out of film school with a successful short, I decided to write the fifty-million dollar action/war movie version, with most of the story taking place in Iraq during grueling combat. I found out very quickly that no studios or financiers would be getting in line to write a check for a morally complex film set during a politically divisive war, and certainly not one by a first-time feature director. So I shelved the script and worked on several other projects until a friend of mine suggested the obvious: Just expand the short into a feature.

I always felt like I crammed too much into the Allegiance short—a common problem with many short films—and after hearing this suggestion, it finally clicked. All the action takes place in one night on an Army base. No explosions. No desert. It worked perfectly for a low-budget “prison escape”-style thriller. I had just cut tens of millions from the budget. As I began to turn 15 minutes into 100 pages, I realized I wasn’t the same person I was when I wrote the short several years earlier.

My experiences dealing with the call-up and my subsequent decision not to volunteer made me approach the story differently. I had a much stronger connection with the main character, Sefton, and his decision, borne out of guilt, to help fellow soldier Reyes go AWOL. This focused the feature and led me to create the new character of Lieutenant Chambers, Sefton’s replacement, a soldier recently resigned from the Army who already did his time in combat and is now intent on starting his new civilian life. Because of Sefton’s selfish choice to accept a deferment, Chambers’ life is completely changed. In many ways Chambers is a literal manifestation of Sefton’s guilt, and their relationship and conflict in the film explores the internal struggles that I dealt with after going through my call-up.

After I completed the script we started looking for money—always the biggest challenge. We began with military friends. One of the strengths of the story of Allegiance is that it portrays a realistic and complex view of the military, one that most people who serve experience. No political agenda. No gratuitous action. Just real soldiers dealing with real problems the night before war. I’m very proud to say that a good portion of the financing came from veterans and their friends—people of all political stripes.

After a year and a half of raising money, casting an amazing group of actors and surrounding myself with an unbelievably talented and dedicated crew, I was fortunate enough to have the rare opportunity to turn my thesis short into a feature. The process certainly turned the idea of “write what you know” on its head—a fictional short that turned much more real as it was made into a feature.

Allegiance (Working Title: Recalled), starring Seth Gabel, Shad “Bow Wow” Moss, Aidan Quinn and Pablo Schreiber, will have its world premiere at the Seattle International Film Festival, where it screens on Friday, June 8th and Saturday, June 9th. For more on the film and to keep up with future screenings, visit www.recalled-movie.com.

Painting Palettes: Bringing Characters to Life in For the Love of Money
Going Grassroots: Stephen Gyllenhaal talks local politics and his new movie