Mission—Moviemaking: How a Group of Military Veterans Raised $1 Mil. on Indiegogo to Make Range 15 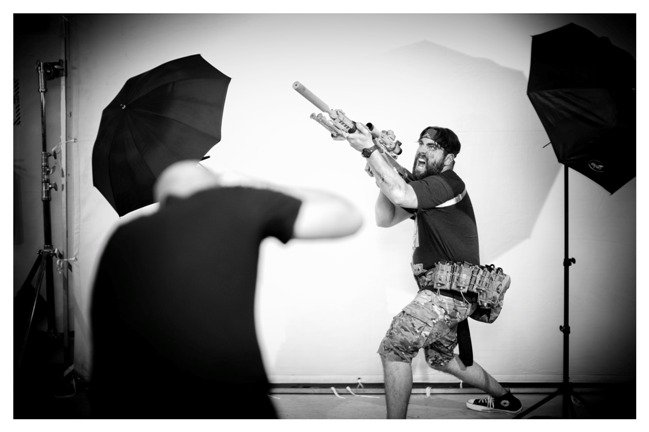 It was the spring of 2015 when I first heard the rumblings, on Facebook, of a movie project called Range 15.

It was rumored to be a zombie apocalypse movie that was being done almost entirely by veterans. The more I learned about Range 15, the more intriguing it got.

Two competing military veteran-owned T-shirt companies (Article 15 Clothing, run by former Army Rangers Mat Best and Vincent Vargas, and Air Force JTAC Jarred Taylor (J.T.); and Ranger Up, run by former Ranger Captain Nick Palmisciano and former Green Beret and MMA fighter Tim Kennedy) were joining forces to make a feature film. These guys had no filmmaking experience at all. OK, they had made some YouTube videos featuring guys firing guns, flamethrowers, and girls in bikinis, but nothing that remotely indicated that these guys had a clue how to make a feature film. Mat Best and the Article 15 guys did have a huge YouTube following in the veteran and active duty military communities. But now they had a full-length feature script in their hands, and they planned on starring in the film, raising the money, and distributing it themselves.

“We decided to do this film for one reason and one reason only,” Palmisciano says. “This movie is for the veteran community. It’s not for anyone else if they don’t want it to be. I hope that it becomes a big hit; I hope it makes a lot of people smile, and I hope it does a lot to bridge the veteran-civilian divide. But if it doesn’t, and the only thing that happens is our veteran community has a movie that they love, then we have succeeded.”

“The amazing thing is that we didn’t kill each other while Nick rewrote the script for 18 months—26 rewrites,” says Best. “Seriously, we went over every single scene and piece of dialogue about a hundred times, fought hard for what we believed, and still ended up great friends when it was done. We figured that all we needed to do at that point was raise $325,000, and we could make it happen.”

When they felt the script was in a good place, the team talked director Ross Patterson (Helen Keller vs. Nightwolves, $50K and a Call Girl: A Love Story, FDR: American Badass!) into accepting the director gig. “I was actually honored that these vets wanted me to direct their movie,” Patterson says, “but when I read the script and saw what they had proposed as a budget, I was a little skeptical that it could be done for that.

“The script was so outrageous, though, that I truly felt like it was a movie that only I could do justice. Let’s face it: What could be more entertaining than the story of a team of military veteran screw-ups becoming the world’s only hope of surviving the Zombie Apocalypse? The fact that this film is unrated, and there is no nudity in it, says all that needs to be said.”

In May 2015 the group started an Indiegogo campaign in an attempt to raise $325,000 for Range 15. Unlike many film campaigns, they didn’t try to sell their movie by making a trailer or focusing on the plot. Instead, the campaign concentrated on putting across the idea that veterans could make a great film if they all banded together. They believed that idea was more powerful than any trailer they could come up with.

All the while, Patterson and Palmisciano were working behind the scenes on the business end. Palmisciano managed to attract some sponsors to come on board prior to the campaign launch. Despite this, he says, “Ross never believed that we could raise the money. I mean, he humored us because we were veterans, but in his heart, he never believed it.”

Patterson says, “I didn’t think that these guys had a prayer of raising the $325,000. Hell, I’ve been in this business for 16 years, I’ve raised money using crowdfunding, and it’s fucking hard.”

Patterson: “I have to admit that blew me away. I mean, who were these guys really? Still, it was a lot of script and we all know that $325,000 isn’t that much.”

Then former Navy SEAL Marcus Luttrell (whose story has been told in both book and film as Lone Survivor) made a video for the page, stating that if the campaign hit $500,000, he would join the cast of Range 15. Donations poured in. Other veterans and active duty military volunteered their assistance. Medal of Honor recipients Clint Romesha and Leroy Petry joined the cast. $500,000 was hit in a few days.

As the donations passed the $600,000 mark, the vets started reaching out to A-list talent—at which point they encountered their first pushback from Hollywood. They couldn’t understand why they were having so much trouble with casting.

“The script that these guys had written was politically incorrect, irreverent, controversial and shocking,” Patterson says. “Agents were scared as hell to show it their clients. There wasn’t a page that didn’t have the word fuck on it, and they insulted everyone, including themselves. Except for maybe kids… wait, oh yeah, page 67—kids too.”

From there, it was a slow grind to the final tally. The team ran ad campaigns, coaxed shares, did press events and kept adding new perks. The final amount raised was a little over $1 mil., collected from 10,000 contributors.

“That’s 25,000 perks that we were going to have to fulfill: T-shirts, coffee mugs, challenge coins, producer credits, signed posters, a day as an extra, and the list goes on,” says Ranger Up’s Jack Mandaville, “perk handler” and a co-star in Range 15. “We had amazing perks, and lots of contributors purchased more than one.

“The biggest drawback was that Indiegogo didn’t really track them as well as we thought it would. We ended up with quite a mess sorting out who ordered which perks. After six months, I almost have it all sorted out.”

I myself joined Range 15 about two months out from principal photography. (Patterson says that when I contacted him via Facebook about producing and directing second unit, I threatened him with physical harm if he didn’t hire me. But there is no actual documented proof of that.)

The guys took the movie seriously. I have to admit, a couple of times I couldn’t help but smile watching them learn just how much of a pain in the ass filmmaking can be. Whether it was insurance, casting, actors, agents, agent’s agents, agent’s agent’s agents, or weird SAG rules, every single step was hard. But they never backed away from anything. I had never seen a bunch of first-time actors do five pages of dialogue with six characters in a scene and nail every line. But thank goodness they did, because we shot the 90+-page script in only 13 days. Day after day, they kept up this crazy pace without a single moan.

On the days that the Medal of Honor recipients were on set, the work ethic was, almost impossibly, pushed up another notch. When there were 30 extras—mostly veterans and many disabled vets—it got pushed up another notch. The group was not going to let down all the veterans, active duty personnel and civilians that had contributed to this film. They took that commitment personally.

Principal photography ended the last week of October 2015. You could sense the euphoric effect it had on these first-time filmmakers—but once that bubble was popped they got right back to work, fulfilling Indiegogo perks, giving editing notes, continuing to raise money for the music, and doing their day jobs of running two hugely successful businesses.

On January 19, a Range 15 trailer was released on YouTube. Less than 36 hours later, it had been viewed over 2.5 million times. (It now has more than 5 million views.) As an independent producer, I have never received so many emails and phone calls from distributors wanting to distribute a film before. The emails have been continuous.

“We’ve had a lot of offers for this movie,” Palmisciano says, “but there were a lot of things we would have had to change, and that’s not really what we wanted to do. We blanched at the idea of going against the system this whole time and then selling out at the end.”

So we decided on self-distribution using Tugg, a miracle for independent moviemakers that don’t want to give 70 percent of their film to a distributor. Via Tugg’s agreement with theaters throughout the U.S., you plan your showing, Tugg handles all the details, you sell enough tickets to reach a preset threshold per screening, and every time you reach that threshold they create another showtime for your film. Range 15’s strong social media following made the process quite simple. We opened ticket sales for 300 theaters on April 20, and as I write this two days later, requests have been put in for 200 more. MM

Casting a Light: Lessons on Finding the Right Actors From Before the Sun Explodes
How They Did It: A Shot-For-Shot Remake of the Airplane Scene from Raiders of the Lost Ark