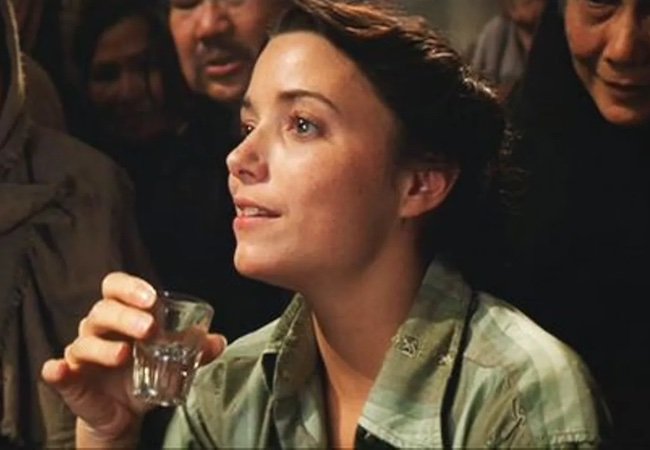 She and Ford didn’t spend much time together at first — but they bonded over one of the all-time great tennis battles, solidifying a partnership they later picked up in 2008’s Indiana Jones and the Crystal Skull.

In that 2008 film, we learn that Allen’s character, Marion Ravenwood, and Indiana Jones, played by Ford, have a son named Mutt. Interestingly, the actor who played Mutt, Shia LaBeouf, later starred in Borg v. McEnroe, about the tennis competition that fascinated Ford and Allen in the summer of 1980.

In honor of Raiders‘ 40th anniversary this month, we talked to Allen about her best and worst moments on the Raiders set — and other Indiana Joneses she met before Spielberg and Lucas settled on Ford. All four Indiana Jones films are out now in a new 4K Ultra HD Blu-Ray collection, and production is underway on a fifth Indiana Jones film. Whether Karen Allen will take part is a well-guarded mystery.

MovieMaker: What is your best memory of Raiders of the Lost Ark?

Karen Allen: Gosh, I have so many, it’s very hard to choose a “best.” But I think maybe one of the most extraordinary memories was when I first arrived at Elstree Studios in London. I had never really shot a film in a studio. I had done three films before, and they had all been sort of real locations.

We walked into Elstree Studios, and the production designer and art director had created these worlds that were, you know, the Well of Souls and the Raven Bar, and I was just in awe. I was just completely bowled over by the artistry, and the incredible job that they had done.

Was there a worst or hardest part? I know those aren’t necessarily the same.

Some of the hardest stuff was when we were doing the sequences in the catacombs, after we get out of the Well of Souls. My character kind of gets lost in this sequence, in a place that seems to be stuffed with corpses and sarcophagi and snakes coming out of their eye sockets and things. I was moving through these sequences that had been kind of loosely written in the script, all of this stuff. There were people up above, in the rafters of the set, dropping down chunks of dirt and dust and cobwebs and they would ask me to look up and scream and a huge chunk of dirt would go into my mouth or into my eyes or up my nostrils. And that was like seven days of that. There was no real acting…. I wasn’t talking to anybody. I was just completely reacting to weird skeletons and snakes and stuff that. So that that was a low point.

I was always curious about the scene where Marion just completely outdrinks all the men in the bar. How did you feel about that scene? It just does such a good job of establishing who she is.

Oh, I just loved it. I mean, that was my first contact with the film, because I had met Steven in New York and we talked for 15 or 20 minutes and he hadn’t told me that much about the film. I didn’t know the name of it. It was just being called Steven Spielberg’s next project, I think, at that point. And then when he decided based on that meeting that he wanted me to come out and do a screen test, he sent me the scene in the bar. That was all I had, I hadn’t read the full script.

And so I did two screen tests with two different potential Indiana Joneses, and so I played that scene over and over again, and I just really fell in love with the character when I worked on that scene. And I felt like, what a beautiful introduction it was to a character. And I think that was when I just really knew I really, really wanted them to cast me.

Here’s Karen Allen in the Raiders of the Lost Ark bar scene:

Can you say who the two potential Indiana Jones were?

Yeah, one was Tim Matheson, who I had done Animal House with, and the other one was John Shea, who was a wonderful New York actor who’s a director now. So I heard tell that Sam Elliot auditioned, I’ve heard tell that Jeff Bridges auditioned. And I forget who else but I think, you know, Steven was seeing a lot of different people. It had been Tom Selleck. Tom Selleck had fallen out of the project before I auditioned. So they really were kind of starting from scratch trying to figure out who’s gonna play the role.

Your chemistry with Harrison Ford is perfect. When did you first meet him?

I think I had I had been cast for a few weeks, and they were desperately trying to find somebody. And this is how I remembered it. I was in Los Angeles, for some reason, and they asked me to come to the opening of Empire Strikes Back in Los Angeles, Stephen and George had. And so I went, and I watched it, and of course, loved it. And Harrison was there. And at the time, you know, Harrison was right in their backyard. And yet, they weren’t necessarily actively thinking of him for for the role, as far as I know. But then suddenly, within a couple of days, they decided, why not? Why not cast him, even though he’s playing Han Solo. Maybe he can do Han Solo and Indiana Jones both. And suddenly, he was cast. And suddenly, Steven then invited me to meet Harrison, in his office. So we both showed up there at Stephen’s office and spent maybe a half an hour just saying hello to each other. And, and then I think I did have dinner with him, maybe a few days later, and then I didn’t see him again, until we were actually all flying over to start work on the film. So we just got to know each other little by little.

Did you get along very well, from the start?

We’re both big tennis fans, Harrison and I, and one of the most exceptional Wimbledons, with Björn Borg and John McEnroe, took place. One of the greatest Wimbledons of all time. And we all gathered over at Harrison’s house, and we had this whole day of sitting there watching tennis. That was, socially, one of the first times that we spent time together outside of working on the film.

Main image: Karen Allen, of course, in Raiders of the Lost Ark.