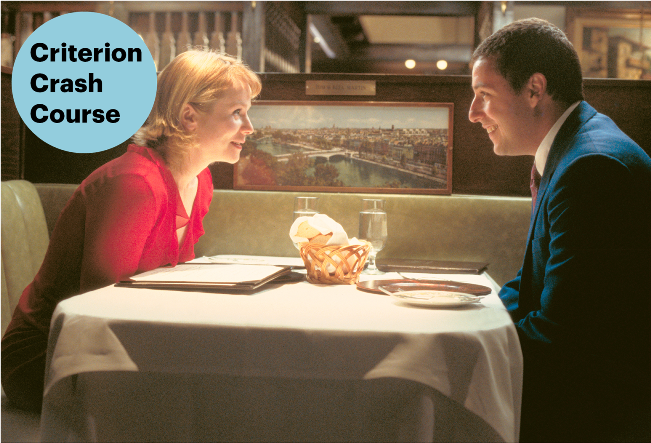 “Here’s a list of things in Punch-Drunk Love that won’t be covered but that I love nonetheless,” writes Miranda July to open her essay, entitled “A Delegate Speaks,” in the new Criterion Collection Blu-ray edition of Paul Thomas Anderson’s 2002 film. She then goes on to list those things, and the list actually takes up about a fifth of her very brief essay, but I appreciate her sentiment: Punch-Drunk Love is a modern classic, and its parts have been picked over by so many, that making grand statements about it at this point feels like so much repetition.

July’s essay takes a personal route instead: She relates herself to both Barry Egan (Adam Sandler) and Lena Leonard (Emily Watson), talks about her complicated relationship with her father and his favorite films, and about how she met her husband. Indeed, this is a not one of Criterion’s more academic package—no one tries to ascribe Punch-Drunk Love its place in cinematic history (it has been only 14 years); there’s no commentary track, either. For Anderson’s sweetest, lightest, shortest film, though—the first of his remarkable oeuvre that Criterion has gotten to—I’m guessing most fans will be content to enjoy this lovely new HD digital transfer, supervised by the man himself, in its glory.

The story is well-known. Coming out of his megalithic, Oscar-nominated third feature, Magnolia, in 2000, Anderson wanted to head in the complete opposite direction: to leave death and despair behind for a comedy, to leave Magnolia’s three-hour runtime behind for just 90 minutes, and to leave behind the complex interlocking ensemble for a pared-down character study.

The moviemaker had found relief from the emotional drainage of Magnolia in Sandler’s Saturday Night Live skits, and somewhere along the way he’d determined that the comedian was to be his next star. Anderson had an innate grasp of the Adam Sandler persona on display in films like The Waterboy and Big Daddy, and saw, under the surface, a seething, lonely, terrified man, flailing in a mask of bland, silly inoffensiveness. Casting him as Barry wasn’t casting against type; it was exposing the almost unbearably true nature of a type, a Sandler that was hiding in plain sight (though he’s pretty much gone back into hiding these days). Throw in Emily Watson’s marvelous portrayal of Barry’s paramour, Lena, who is kind and wry and worldly and self-assured and vulnerable and hopeful. Equally brilliant with even less screentime are the supporting players, like Philip Seymour Hoffman and Mary Lynn Rajskub. Then there’s the work of DP Robert Elswit, whose anamorphic images glide and swoop and pace with feeling—as when Barry talks to a phone sex operator while stalking nervously around his apartment. Pages could be, and have been, written about Elswit’s virtuoso use of lens flares, which also indicate heightened emotion, particularly between the two lovers—during their first meeting, for example, a diagonal line of light flickers across the space between their bodies, connecting them. (The cover art of this Criterion package plays on the signature flares, framing the title text in a blue glow.). And then there are digital artist Jeremy Blake’s vivid paintings, which act as brief amorphous interludes between segments of the film, lush and delirious at once.

In short, this deceptively simple movie packs a formal wallop. So let’s talk about one element that ties it all together: the soundtrack.

Anderson has established a pattern of close collaboration with favorite composers. (His current relationship with Jonny Greenwood holds a three-for-three record.) Composer Jon Brion had worked with Anderson on both the latter’s debut feature, Hard Eight, and Magnolia before coming to Punch-Drunk Love; he went on to score films like Eternal Sunshine of the Spotless Mind, Synecdoche, New York and ParaNorman. A new interview with the engaging composer on this Criterion release is arguably the highlight of the special features here. Brion recounts in detail his work with Anderson, whom he describes as a bold and generous collaborator who doesn’t take the “scaredy-cat measures most people in town make:” “Always, always, there is a space given for the music to make an impact.” In Punch-Drunk Love, this results in a fully immersive soundscape that conveys so much of story and character. It’s a perfectly conceived sonic rendition of Barry Egan’s psychology.

Most memorable, probably, is the exquisite melody that swells up whenever Barry and Lena kiss, that old heartstring-tugging romantic trope. Brion recalls himself and Anderson watching old MGM musicals, trying to recreate a ’50s feeling. A breakthrough occurred when he said to the director, “You want the thing to feel like a musical, but nobody breaks out into song.” Much of the soundtrack is a throwback—from the Ladies K cover of Andy Cummings’ Hawaiian classic “Waikiki,” to Harry Nilsson’s “He Needs Me” from Robert Altman’s 1980 Popeye, Shelley Duvall’s childlike vocals aptly conveying Barry’s wonder at his budding romance. (“When you steal a song from a twenty-two-year-old movie, you also steal all the tenderness the movie’s viewers have accrued since it came out,” writes July.)

Then there are other tracks of a more “baroque-futurist” nature (as Criterion puts it), like “Hands and Feet,” which plays over a stressful sequence in Barry’s warehouse office. With an antic percussion, discordant tones and noises that veer from animalistic to machine-like, it’s complete sonic claustrophobia. And it comes together so effectively with the chaos and clamor of the warehouse: workers running over to attend to an accident, Rajskub—playing one of Barry’s harpy-like sisters—darting at him aggressively, Lena’s bemused attempts at friendly conversation, the interruptions of Barry’s ringing phone.

How did that all gel so well? The secret, says Brion, was that he started composing long before shooting began, instead of coming on board during post-production after photography had wrapped. This, he says, enabled a “completely integrated process” where picture and sound could work hand in hand, precisely and on equal footing. Anderson would play himself pieces of temp music while orchestrating his long tracking shots, which gave him “a sense of poetic pacing” by which he could feel the scene out. Brion recalls writing these preliminary pieces—sometimes just rhythm—as Anderson sang them out to him; even at that initial stage, just knowing the tempo gave an order, a backbone, to the shooting.

Having that musical skeleton early on helped everything find its balance: Brion remembers Anderson playing Sandler back a scene with the temp score, which made Sandler realize he could do even less with his performance than he had been—the sounds were so evocative already.

Fast-forward to post, when the musical collaboration continued as Brion fine-tuned his own rough sketches. The entire team, led by Anderson and editor Leslie Jones, worked in the same building together, which again made cohesion easy. They sat down every few weeks to watch the whole movie beginning to end. This clarifies how much the various components of the film run into each other, difficult to distinguish, like Jeremy Blake’s layers of color fading, trembling and merging.

Besides the aforementioned July essay and Brion interview, the standout new extra on this disc is a conversation about the work of Jeremy Blake (who tragically passed away in 2007), between Michael Connor, curator and artistic director of Rhizome at the New Museum, and Lia Gangitano, gallerist and founder of Participant Inc. The two talk about the artist’s oeuvre, discussing video work like Bungalow 8 and Winchester and One-Hit Wonder, a kind of illustrated screenplay with characters from The Wizard of Oz. (In fact Connor and Gangitano go over many of Blake’s cinematic influences, from Suspiria and Truffaut to the films of David Cronenberg.) They also analyze how Punch-Drunk Love incorporates Blake’s hallucinatory images: shimmering landscapes, twinkling stars, chromatic bars, splotches and (what Connor calls “unsettling”) smears.

On the Brion front, we get a 10-minute behind-the-scenes video of a soundtrack recording session at Abbey Road. There’s also a 2002 Cannes Film Festival press conference with cast, PTA and his longtime producer JoAnne Sellar (during which Anderson drops the memorable line, “I like supermarkets, I like phone sex, and I live in the Valley,” as well as a couple of serious answers); a French studio interview; and a 2000 NBC News interview clip with the real-life “Pudding Guy” who inspired an important part of Barry’s storyline by earning airline miles through a Healthy Choice promotion.

Other supplements appeared on previous DVD options: a fake commercial for the Mattress Man company owned by Hoffman’s character (during which he jumps off a roof onto a stack of mattresses, then falls off); the short compilation of alternate takes, Blake art and music titled “Blossoms & Blood;” 12 Scopitones (i.e. seconds-long fragments of picture, artwork and music); deleted scenes and additional Blake artwork.

P.T. Anderson, more than most, thinks of his films as overall sensory experiences. He doesn’t separate picture, sound, performance and story in his mind, and in fact pays deliberate attention to making sure all work together in apparently effortless unison. The effect is a movie bursting with synaesthesia, accessing the senses on unusual levels—”your whole body [is] implicated,” as Michael Connor puts it.

If that is your goal, too, spend time nurturing the synergy between the various parts of your vision. Hire a team that is both brilliant and, importantly, able to work together as a collective. And get everyone involved as early as possible. Sure, they’d probably be able to produce good work without this focus on integration… but would they be able to produce genius? MM

Other titles in Criterion’s November line-up:

Lone Wolf and Cub: Sword of Vengeance, Baby Cart at the River Styx, Baby Cart to Hades, Baby Cart in Peril, Baby Cart in the Land of Demons and White Heaven in Hell // Marlon Brando’s one-and-done directorial debut, One-Eyed Jacks, which subverts Western genre norms and reconfigures the legend of Billy the Kid, now given a gorgeous 4K restoration supervised by Martin Scorsese and Steven Spielberg // Akira Kurosawa’s Dreams, a wildly imagined entry in the latter years of its master director’s canon that brings to the screen a series of his own subconscious wishes and visions // The Squid and the Whale, Noah Baumbach’s sardonic yet tender coming-of-age tale set against the backdrop of 1980s Park Slope, Brooklyn, featuring uniformly excellent performances by Jeff Daniels, Laura Linney, Owen Kline and Jesse Eisenberg.

Criterion Giveaway: Every week, we’re giving away a different Criterion title to one lucky winner. To enter the draw, all you have to do is subscribe to our newsletter! Full instructions here, and follow @moviemakermag on Facebook and Twitter for announcements on every week’s title.