A Public Enemy Movie Idea, From Years Before Bernie (Podcast) 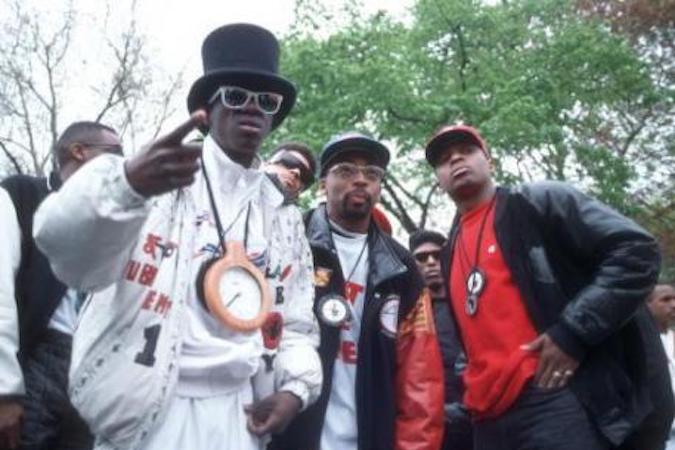 The Public Enemy dispute over Bernie Sanders that led to Flavor Flav exiting isn’t the first crisis for the greatest group in hip-hop history. In fact, what’s going on now is nothing compared to what Public Enemy faced around the release of “Fight the Power,” the masterful theme for Spike Lee’s Fight the Power.

Not long ago, our Shoot This Now podcast— about true stories that should be made into movies — featured journalist Dart Adams talking about the group’s near-destruction around the time they recorded their signature song, released in 1989.

You can listen here…

…or on Apple, Spotify or Acast.

The story of Public Enemy and “Fight the Power” is relevant to everyone trying to make a political statement: How much should you stay true to your closest allies, right or wrong, and how much should you compromise for a wider audience?

Public Enemy’s leader, Chuck D, found himself on the verge of breakthrough success — and expanding his message of black unity — when a public relations crisis broke out.

Professor Griff, a member of the group, made anti-semitic comments that brought demands, mostly from white critics, that Griff be kicked out of the group.

Chuck D didn’t support Griff’s statements, but also didn’t want to be seen as kowtowing to the white media.

The dilemma threatened to stop the momentum of Public Enemy, and Do the Right Thing, which would soon become one of the most important Americans films about race.

As Adams explains on the podcast, Chuck D made a difficult choice — but the one that saved his group. The reason Public Enemy exists today, to play a Bernie Sanders rally or do anything else, is because of the decision Chuck D made 30 years ago.

How has no one made a Public Enemy movie? We understand the group is a little busy right now. But it’s insane that no one in Hollywood has seen the potential in the Public Enemy story enough to give the group the Straight Outta Compton treatment.

Note also, in our world of quickly escalating feuds, how measured both Public Enemy and Flavor Flav have been in their public statements about the disagreement.

When Flavor Flav’s attorney called out the Sanders campaign for using his likeness to promote the rally, he criticized Sanders alone — not Public Enemy.

“Flav … has not endorsed any political candidate in this election cycle,” attorney Matthew Friedman wrote. “It is unfortunate that a political campaign would be so careless with the artistic integrity of such iconoclastic figures in American culture.”

Ultimately, the group and Flavor Flav parted ways — but everyone was notably polite about it.

“Public Enemy… will be moving forward without Flavor Flav,” the group’s statement said. “We thank him for his years of service and wish him well.”

Many in the news media have, predictably, characterized the split as a feud or fight — but Chuck D and Flavor Flav have taken care not to fuel that narrative.

You can read Adams’ story about Public Enemy and “Fight the Power” here.

Quentin Tarantino: Things I’ve Learned as a Moviemaker
Why You Shouldn’t Write, Direct, Produce and Edit Your Movie Yourself