You Need Professional Help: How Essential is Mentorship in the Film Industry? Indie Filmmakers Weigh In

When Alan Barillaro, director of “Piper,” this year’s Oscar winner for Best Animated Short Film, accepted his award, he said, “Honestly, we’re only here because of the support and mentorship of many.”

The longtime Pixar moviemaker then thanked John Lasseter, Andrew Stanton and others at the animation studio. If you’re an artist looking to break into film, how do you find mentors in a close-knit industry that doesn’t always welcome newcomers and outsiders with open arms?

Anne Hamilton, writer-director of South by Southwest 2016-premiering horror feature American Fable, puts it this way: “There’s an essay on a cliff jumper who makes a leap because he believes he can. I think having the belief of a mentor in you can make the difference between reaching the other side and not. Mentorship has magic in it.”

Hamilton is currently searching for that person in her life. “I need to meet someone who has gone through a similar career path to mine, who can give me perspective on the challenges.” Her fantasy mentors? “David Fincher, Ridley Scott or Kathryn Bigelow. It’s not easy to meet these kinds of people, and I get why. You are competing for time with their work, their families and people who rely on them. It’s almost impossible, but the right people are always worth waiting for.” 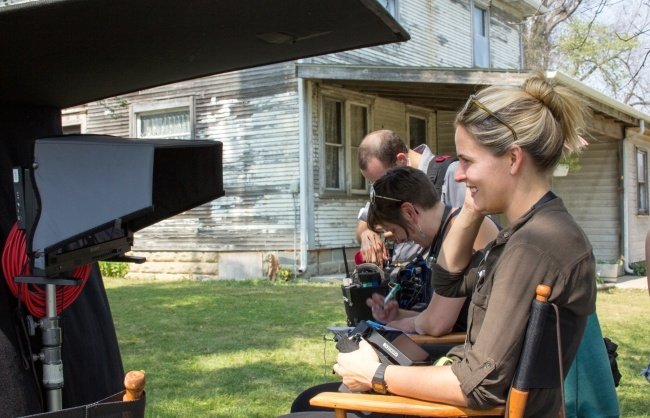 Prospective mentee Anne Hamilton on the set of her feature American Fable. Photograph by Katrina Meier

Each mentor-mentee relationship is unique, and the ones that work are custom-tailored to two personalities in sync. At least mine is. Eleven years ago, moviemaker Ali Selim became my mentor. It began with an informal email introduction from a mutual friend: “You two should know each other.” At the time we had nothing in common but ties to Minneapolis, a great appreciation for Hal Ashby’s Being There and a passion for storytelling. Ali was a recipient of the Independent Spirit Award for Best First Feature Film (the captivating Sweet Land). I was an assistant at a hedge fund in New York City with sights set on my first feature. Ali reaplied, “I look forward to meeting and hope our schedules sync. I’ll be in Provincetown for the film festival this weekend.” To which I promptly lied: “Cool! I’m going, too!”

I had $200 in my account and drove 300 miles in the cheapest (and brightest yellow) rental car, with no place to stay, to make sure I didn’t miss the opportunity to meet Ali at Provincetown International Film Festival. “You know, this could be considered stalking,” said my boyfriend. We arrived at the festival only an hour before Ali’s screening. I texted him, “We’re here!” I didn’t expect him to reply but he did immediately: “Great! Let’s have dinner.” I knew this might be the only time I ever had with him so I was ready to tell him my story and learn more about his.

Watching the clock tick, I straightaway asked for advice from Ali on how to make my first film, specifically on how to raise the money. He gave me some. My confidence soared as we finished dinner and walked to his sold-out screening, which he gave us tickets to. After Ali’s screening, we met up at the bar next door to discuss his film. I asked if I could continue reaching out as I struggled to make my film, and without hesitation he said yes.

That night we slept in the yellow car. The next morning, we filled up the tank, bought bad gas station coffee and drove back to Brooklyn wearing the same clothes. When we got home I had maybe $50 left in my account. It was totally worth it.

David Jenkins, creator, writer and producer of TBS series People of Earth, met his mentor, The Office showrunner Greg Daniels, via a script. “I’d never met Greg, but I wrote a one-pager that I attached to the back of the People of Earth script that described the show as a cross between a Greg Daniels human comedy and a J. J. Abrams ‘magic box’ show. Through a couple of lucky coincidences the script found its way into Greg’s hands, and he was the driving force behind the show getting made. Collaborating pretty closely with him for a couple of years [Daniels executive produced and directed some episodes] was an incredible education.”

Editor Lei Shi found her way to Roger Corman, king of B-movies and one of the most well-known mentors in the industry. “Back in the old days when I started in post-production, the place to go was Roger Corman’s company, Concorde-New Horizons. He would take anyone who wanted to work for free—basically a golden opportunity to get on a network show as an apprentice. So I worked as an apprentice editor and learned editing and assistant editing, and eventually started getting paid as an assistant editor.”

Recognizing Good Advice When It’s Given

Craig Chester, actor (Swoon) and writer (True Blood), met his mentor, actress Joanne Woodward, when he auditioned for her play The Lover at Sarah Lawrence College: “Joanne noticed that I had a kind of plaintive, naturalistic quality as an actor and told me that I was more suited for film acting than for the theater—something I did not want to hear, but then again, your mentor is also usually the first person to break the news to you that you are both more and less than you know. I was dead set on a career in New York theater and had no interest in doing films; the AIDS crisis had me politicized as a young gay man and I had no interest in being in the closet. But Joanne called me out on my limiting beliefs. A couple of years later in 1992, I went on to star in Swoon. Being an openly gay actor became part of my ‘brand,’ although we didn’t call it that back then.”

Under his wing: Jayce Bartok and his mentor, Spotlight director Tom McCarthy. Courtesy of Bruce Glikas

Actor, writer, director Jayce Bartok (The Cake Eaters, Fall to Rise) acted in director Tom McCarthy’s first film, The Station Agent. “Tom read my first script, The Cake Eaters, and sat with me early one morning in the village giving feedback. Then, when I was working on a test reel for my film Fall to Rise—in which we used faux documentary interviews with the leads as a technique—I sent it to Tom. While walking down a back street in Portland, Oregon, my phone rings. It’s Tom, asking me to explain what I was trying to do with the technique. I did, but he said, ‘Look, write a good script. That’s all that’s important.’”

Ali was my perfect mentor when I was making my first feature, Nonames. He knew my world, he had more experience than I did, and he was available throughout the entire four-year process from development to distribution. But he didn’t do the work—I did. Ali never promised me I’d make it as a moviemaker, or offer to walk me into his agent’s office. In fact, when I overstepped the boundary by asking to be introduced to his fancy new agents, he kindly replied that he was the new kid on the block himself, and needed to find his own way first.

Brooke Goldfinch, director of the award-winning short film “Red Rover,” was mentored by Ridley Scott. “I was a director’s attachment on Alien: Covenant last year, an opportunity I got by applying to a program run by the Australian Director’s Guild. I have seen young filmmakers who think that a mentor will make the difference in their career between success and failure, but I think that’s extremely rare. Mentors have helped me less with meeting the ‘right people,’ and more with support and knowledge.”

Jenkins: “One thing Greg said that stuck with me—he might have been quoting Mindy Kaling—was that mentorship seems to follow movie structure: The main character gets a mentor who is able to train them and guide them through the trials and tribulations of the second act. By the third act, the mentor dies and the hero has to continue on alone.

Fortunately for the hero, they’ve absorbed the teachings of the mentor, and use them to win the day. I like to think it works this way in the real world, as well: Someone can mentor you for a short time and then leave, but that doesn’t mean their impact is any less for leaving. In fact, I think it’s probably better to have a number of mentors through life for short, intense bursts. In my experience, mentor-mentee relationships seem to work best if a specific project is involved. It’s a little hard to have this relationship happen organically if there isn’t a mutual external focus. If a specific project is involved, it’s less abstract.”