First Draft: Conceptualize Courtship in Your Screenplay By Understanding the Romantic Subplot

It is a common narrative archetype found in all forms of story, from ancient to modern: a hero journeys to a foreign land, wins the love of a princess by performing certain deeds, and through this romantic union becomes the land’s future king.

Contemporary versions of this archetype abound in modern storytelling. Time and again we find “princesses” won over and “kingdoms” claimed, albeit in the figurative contexts of specific story worlds. And while most modern audiences look at this as pure romantic fantasy, it is worth closer investigation. Why is “winning the hand of the princess” so often an integral part of male-hero films? What is the meaning behind this archetype and what greater purpose might it serve?

To understand this archetype, we must first look to its origins. The idea that a common young man could become king by simply winning the heart of a young lady seems fantastic to us today, because most of us are only familiar with patriarchal monarchies, where rulership descends by male birthright. Upon the death of the king, the crown is given to his eldest son, or barring that, the eldest grandson, brother, or nephew.

However, this system was not always the norm. In Chapter 9 of The Golden Bough, one of the first substantial and most fiercely-debated works on cultural and religious anthropology, author Sir James George Frazer provides intriguing evidence from ancient Latium, Greece, Scandinavia, and Britain to show how in many early societies the right to the throne descended along the female line.

This means the crown was not handed down to the king’s son, but whomever should marry the king’s daughter. In other words, rulership was given to the king’s son-in-law—a stranger to the royal bloodline. If the king’s own sons wished to be rulers, they were forced to travel to foreign lands in search of their own princesses to marry. Indeed, the king himself was not of royal parentage (at least not of the kingdom he ruled). He earned his throne by way of his marriage to the queen.

With kingship granted through marriage rather than bloodline, any man might become king, whether he be a nobleman, a peasant, a foreigner, or a slave. Yet of course, the fate of the kingdom depended upon the selection of the best possible candidate. For this reason, female-bloodline societies typically required suitors for the princess’s hand to prove their worth by way of a challenge or contest.

This ensured that only the strongest, most skilled, or most intelligent of men could become the future king. Thus stories in which impressive deeds win lowly young heroes the right to marry a princess, and with it the eventual crown, are not far-fetched works of fantasy. In fact, some of the oldest tales may be based on or inspired by actual events.

Tom Cruise as Jack and Mia Sara as Lili in Legend

To cast further light upon this archetype and its significance to modern narratives, it is necessary to explain the reasoning behind this seemingly counter-intuitive mode of succession. Why was the crown passed from father-to-stranger rather than more reliably from father-to-son? Why was the female line so important and an outsider considered most suitable to be king?

An explanation may be found through a synthesis of the even older rituals and beliefs detailed in The Golden Bough’s preceding chapters. Using a plethora of examples, Frazer lays out three themes found with near-universality amongst primitive cultural ideologies.

The first is apotheosis: the idea that rulers not only represented gods, but were imbued with the essence of a deity, making them the god in earthly form. The second is an association of nature with the female, as both have the power to bear new life. (This continues today in the phrase “Mother Nature.”) And the third is a perceived connection between human procreation and the fertility of nature. Though it took endless forms, it was widely believed around the globe that the earth could be replenished each year with rituals involving marriage or sexual relations between a husband and wife.

Combining these notions, we may conclude that the princess was believed to be a vessel of the life-giving goddess of nature. To ensure that this goddess would be able to continually replenish the earth, she must be paired with the strongest, and therefore most sexually potent mate. Through this union, the most virile seed was regularly planted in the goddess’s womb, guaranteeing that nature would remain fruitful.

Whether societies followed the system of female descent in explicit reference to these beliefs or as only the lingering vestige of forgotten ideas, the justification remained the same. The people believed the welfare of the kingdom depended upon a successful union between their future queen and the most virile of potential kings; no matter who this king might be.

Of course, these superstitions have been lost in the dust of time. Yet once established, psychological paradigms tend to greatly outlive their original ideological basis. To quote James George Frazer:

Myth changes while custom remains constant; men continue to do what their fathers did before them, though the reasons on which their fathers acted have been long forgotten.

Indeed, cultural narratives have continued to present stories of earth-restoring unions between royal females and valiant males, albeit in disguised forms. And as a direct descendant of folklore and fairy tales, Hollywood films continue this tradition more clearly than any other form of narrative.

Though most obvious in literal “man-and-princess” fantasies such as Aladdin (1992), Shrek (2001), or John Carter (2012), the familiar “man meets princess, man wins the love of princess through valiant deeds, man gains the power of a king” structure repeats again and again in more muted fashion through the common and at times obligatory use of the romantic subplot.

Every moviegoer is accustomed to male-hero films containing a secondary romantic narrative—one often tangential or even unrelated to the main plotline. No matter what physical conflict the hero faces, he inevitably encounters a female love interest.

While this love interest initially shuns, behaves indifferently towards, or fails to connect with the hero due to his flaws or failures, self-improvement and personal achievement are eventually rewarded with a genuine romantic connection between the two characters.

With this union, something magical occurs. The hero gains a strength, authority, or confidence he did not previously possess, empowering him with better means to overcome the story’s problems and restore comfort and order to his world.

To rephrase this in a way which more closely reflects the previous section: The male protagonist begins the story existing within or entering into a “kingdom” (the story world) which has somehow fallen into disrepair. Though under an obligation (recognized or not) to restore peace or prosperity to the kingdom, the protagonist starts as lowly or flawed, and thus illegitimate, a hero lacking the full strength or authority to fulfill this role.

Yet as the hero proves his worth through contests and challenges, he eventually wins the approval of the kingdom’s “princess.” Through a romantic union with this earthly goddess, the hero is himself apotheosized into a higher being, granting him a greater power or authority to take command of the story world and eventually become its “king.” 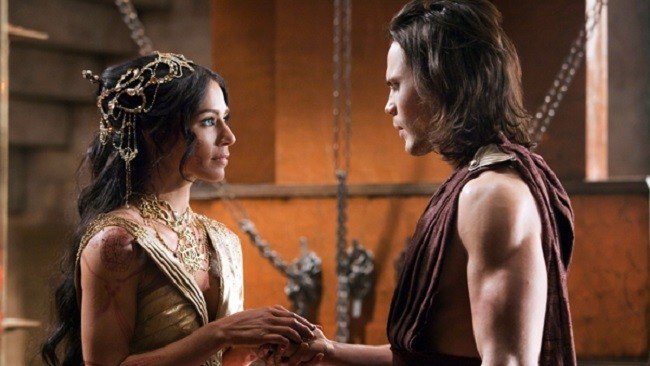 While conceptions of “kingdoms,” “princesses,” or “rulership” take on endless figurative variations from the extraordinary to the mundane, we find this pattern in stories of every type, mode, or genre; whether it be between Terry Malloy and Edie Doyle in On the Waterfront (1954), Lieutenant Dunbar and Stands With a Fist in Dances With Wolves (1990), Phil and Rita in Groundhog Day (1993), or Tony Stark and Pepper Potts in Iron Man (2008).

Though this may overstate a direct causal relationship between the romance and the hero’s ultimate victory (indeed, in many films the influence is more often subtle and indirect), romantic closure inevitably precedes or coincides with the moment the protagonist gains a capability to seize total control of his world.

To briefly return to The Golden Bough, James George Frazer points out that marriage to the king’s daughter was not the only way to legitimately claim the throne. A man might also become king by marrying a widowed queen, by killing the current king and taking the queen as his wife, or by convincing the queen to reject her spouse in his favor.

Once again, royal authority lay in the female line, making whomever the queen weds the legitimate king. Contrary to modern notions, Frazer implies that the citizens of female-bloodline societies would not have objected to these usurpations of the throne. In fact, they would have found the transition acceptable and necessary.

If a king becomes too old, weak, or corrupt to fend off his rivals, he is no longer the strongest and most virile of rulers. Though considered divine, this mortal vessel was now believed incapable of continually replenishing the earth through his connubial duties with the queen. If the kingdom had recently suffered drought, famine, or unrest, the people would be all the more eager to throw out the old god-king in favor of one more worthy.

We find these alternative paths to the throne in Hollywood films as well. In many films, the female love interest is initially partnered with the protagonist’s chief rival. Typically presented as the “alpha male,” this rival acts as the current king of the story world. Yet this is often a weak or corrupted king no longer worthy of his “queen.”

Whether motivated by true love or more unscrupulous desires—see for example Tony Montana’s pursuit of Elvira in Scarface (1983)—the protagonist wishes to take the queen as his own, and thus makes romantic overtures to the female lead in an effort to convince her that he is the superior male.

If successful, the protagonist dethrones and replaces the rival. By switching her allegiance, the love interest elevates the protagonist to the position of alpha male, while sending the rival falling into impotence and eventual defeat.

A reversal of this archetype can also be found in stories where male protagonists quickly rise to the status of kings only to succumb to their flaws in the end. Examples include Citizen Kane (1941), Raging Bull (1980), and The Doors (1991).

In these films, the protagonist consummates his romantic union with the female lead very early, or possesses such a union before the story begins. Yet as the story progresses, the protagonist degrades into a less and less worthy “king,” and as a result strains and often loses his life-sustaining bond with the “queen.”

Invariably, romantic decline parallels the protagonist’s loss of heroic legitimacy. He grows weak or powerless, costing him his throne and banishing him from the kingdom.

First Draft: Will You Give Your Audience a Guided Tour of Your Script’s World, Or Throw Them In Head First?
First Draft: Break Tired Screenwriting Conventions By Embracing the Heroine’s – Not Hero’s – Journey