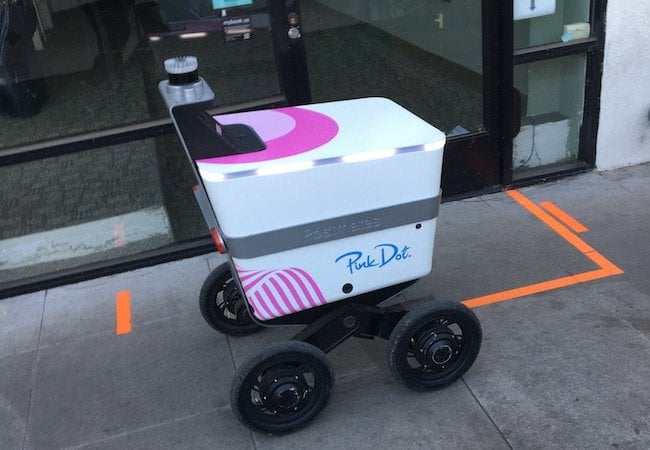 Remember that scene in Magnolia where Philip Seymour Hoffman’s character orders dirty magazines from Pink Dot, the Hollywood convenience store that delivers? If Magnolia had been set in 2020, his order might have arrived via robot: Pink Dot bots are delivering to a city in lockdown.

They move slowly, tentatively, using the same sidewalks as their (mostly) masked human counterparts, occasionally pausing, R2D2-like, to get their bearings or make a turn. They chug smoothly down the main drag, Santa Monica Boulevard, and residential streets, resembling ice cream carts that, instead of being pushed by a person, just push themselves.

It’s just another of the kind of maybe cute, maybe apocalyptic images that abound in Los Angeles County lately, as get-togethers and indoor dining and pretty much all gatherings are banned due to COVID-19, and people enjoy whatever isolated pleasures they can at home. (Sex and weed shops still look to be doing decent business even as the streets are notably empty — perhaps the emptiest they’ve been in decades.)

As many Hollywood types decamp for somewhere around Austin, which seems to be the region of choice, those still here have found that robots can go back and forth between their homes and Pink Dot as easily as they can. Why risk an awkward conversation with a mask scofflaw?

WeHoVille says the robots are part of a pilot program, and are named Pinky, Dotty and Solly.

“We’re so excited! Imagine having this robot making deliveries to your door,” Sol Yamini, owner of the Pink Dot store on Sunset Boulevard at La Cienega, told the publication. “I’ve been in the delivery business for over 20 years and this is the most revolutionary thing yet. This is the future.”

The delivery robots will not enter apartment buildings or homes, because let’s be honest: We’re all so lonely we would kidnap them.

Instead, when a robot arrives, it sends a text message to the human, and an electronic code for opening its storage container, WeHoVille explains.

What can you order? The Pink Dot website advertises everything from booze to cigarettes to snacks to items in a special COVID-19 section that includes masks and toilet paper. Ordering a particular brand of tequila gets you a free T-shirt that says TEQUILA KILLS, and then, in smaller print, THE BOREDOM.

In Magnolia, Hoffman’s character calls Pink Dot to get Playboy, Penthouse and Hustler delivered because he’s too embarrassed to go out and get them in person.

Of course, technology has not yet discovered a way for humans to look at other humans naked in the privacy of their homes, but perhaps someday. Anyway, here’s that great scene from Magnolia: