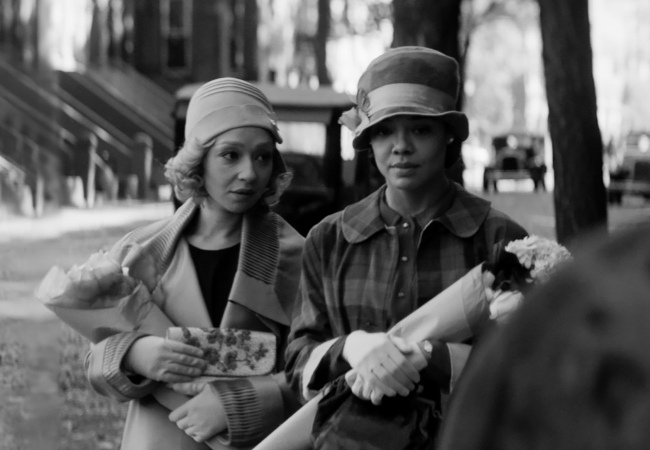 Producer Margot Hand spent years working with Passing writer-director Rebecca Hall in order to get away from the “self-fulfilling prophecy” of micro-budget movies.

“What was difficult was getting people to commit not just to the film, but to a budget level that would allow us to make a version of the film that not only was true to the adaptation that Rebecca [Hall] did, but also what the film and the genre and these women deserved,” Hand told MovieMaker.

“We got a lot of offers for a couple million bucks, but you had to shoot in color. Like, it was a long journey to find people who would sign on not just to a black-and-white period film, but to a first-time female filmmaker with two African-American leads,” she added. “It was very frustrating and Rebecca and I had to walk away from making the film a couple of times because we both knew we would make the wrong version of it.”

A seasoned producer with credits including Miss Julie and Barb & Star Go to Vista Del Mar, Hand has spent the past few years by Hall’s side doing everything possible to make Passing great. Out Nov. 10 on Netflix, Passing is based on the novel by Nella Larsen that follows two childhood friends who bump into each other in adulthood and realize they’re living very different lives.

Hand and Hall have previously worked together on films like 2015’s Tumbledown and 2017’s Permission, so when Hall brought her the exceptional script of Passing, Hand knew that she had to be a part of it.

Also Read: We Hope Our Doc Fish & Men Will Change How You Eat

Passing makes its Netflix debut Wednesday. Although it looks like a big commercial movie, Hand wants to make clear that it’s an indie movie through and through. She credits the sticktoitiveness of stars Tessa Thompson and Ruth Negga with making the film possible — plus a partnership with Significant Productions and a streaming deal with Netflix, which made a bid at this year’s Sundance Film Festival.

Netflix “just really understood what this was, and they were prepared to give us the kind of exposure that films like this with these leading ladies and these storylines don’t typically get,” she said.

“That was part of the point of making this and not making it for a micro-budget because we had these fights with people all the time… it’s just a self-fulfilling prophecy when you make movies for a tiny budget and then they look like tiny movies, and then they don’t get big releases, and then it’s this continuous cycle of people not thinking these films are valuable, when they are. Or that these stories won’t have an audience, when they do.”

Hand also produced the 2018 Sundance-darling Brittany Runs a Marathon, which follows a 27-year-old hot mess of a New Yorker who decides to run a marathon after having a less-than-stellar checkup during a doctor’s visit.

“Brittany Runs a Marathon was similar, you know? People told us to make that for a lot less, and Material Pictures just believe in it and gave us the right amount of money to make it feel like a big commercial movie.”