Shooting (for) the Moon: How Operation Avalanche Pulled Off a Reanimated Kubrick and a Tricky Legal Argument 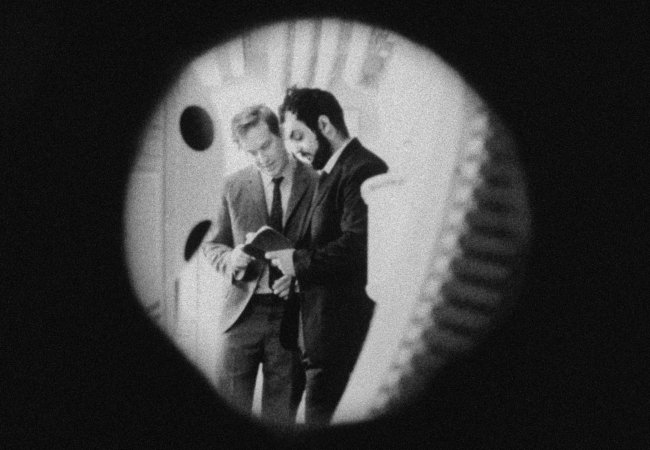 “Do you think we could get the real Kubrick for this?”

That was the question I asked my producer Matthew Miller after going over the first outline of our movie Operation Avalanche in 2014. The film is set in an alternate 1967, with two CIA agent protagonists who have to fake the moon landing. We wanted to have as many of the famous fake-moon landing clichés in the film as we could, and at the top of the list was King K himself, but with the limits of our production (very low budget, no time machine, no necromancers) it seemed impossible.

“Why don’t we just Forrest Gump him?”

Smart idea, Miller. We had already stolen NASA’s 16mm film archive of the Apollo Program (long story) and were planning on comping ourselves into as much ’60s footage as we could (just like Forrest G!). Doing the same for Kubrick should be a piece of cake. And as luck would have it, my first film, The Dirties, was about to premiere in the U.K., which meant I had to fly over there to do press in London, right beside Shepperton Studios, where Kubrick shot 2001: A Space Odyssey…

So we had a plan. Jared Raab (co-DP along with Andy Appelle) and I would fly to London to get footage of Shepperton, while Curt Lobb (my editor) would search for every scrap of behind-the-scenes 2001 footage he could find.

Travel is expensive as hell. Smart moviemakers can turn this into a strength (see: Green Room), but if you’re like me and too stupid to think up a movie like Green Room, you have to figure out how to travel for free. Film festivals will often fly you in and if you can convince them to give you a “plus-one,” you and an actor could be on location in no time.

Our distributor, Pulse Films, paid for our flights over to London, and once we’d finished the publicity tour, we beelined it for Shepperton. We had called the day before, asking if we could have a tour of their facilities for our upcoming movie. Jared had a Blackmagic Pocket Cinema Camera and a hand-cranked Bolex hidden in his backpack in the hopes we could grab a quick shot or two.

At studios like this, you get a little badge to wear so they know who’s who. No badge means security will chuck you out. We had badges because of our tour; even luckier, our tour guide was late. That meant that we were left unsupervised—but with badges and inside the studio. So we did what any self-respecting film student would do: We ran like hell towards the old 2001 sets.

Once you’re in somewhere, you’re in. It’s like that rule for crashing parties: Just act like you’re supposed to be there. People aren’t accustomed to thinking that anyone would sneak into a place just to film there, and that gave us access that would have cost well over the budget of the movie (Avengers: Age of Ultron was filming there, for God’s sake).

As it was, we had the run of the place. We shot everything we thought we could possibly use and, after about two hours, started making our way back to the gates, where, hilariously, we were thrown out by a security team working for Disney. (They thought we were paparazzi.)

Back home in Toronto, we met with bad news: There was no footage of Kubrick on the set of 2001. Kubrick famously had sets destroyed after finishing 2001, and didn’t have a single clear shot of his sets committed to film unless they were through his camera. The only images Curt had come up with were from a few brutal TV-style documentaries, and none of them had anything close to what we needed in terms of seeing Kubrick or image fidelity. What did exist were photographs; not many, but enough that we could get a clear sense of what the sets looked like. Maybe we could build them?

“Hey, I’ve got a crazy idea,” said VFX supervisor Tristan Zerafa, who with one suggestion saved the whole movie. “Instead of video, why don’t we Forrest Gump you into these photos? I’ll rebuild them in 3-D space and we’ll just re-stage the action in a massive green screen studio.”

For me, more than sneaking into NASA, building a to-scale Lunar Lander, or shooting a one-take car chase (in which we almost died), this was the make-or-break moment in Operation Avalanche.

Tristan began turning iconic 2001 set photographs into fully moving, populated spaces. In less than a month, he and Curt had a very rough sequence showing a full 2001 set tour from the perspective of Jared’s Bolex, hidden inside a leather bag. Tristan even broke pictures of Kubrick out into pieces and animated him! I can’t tell you what it felt like to see that rough animatic of Stanley Kubrick signing an autograph for the first time. It felt like we had broken some kind of law.

And as it turned out, we might’ve! Miller and I got a call back from the Kubrick estate with regard to our request to use his likeness for our movie, putting him at the centre of the conspiracy to fake the moon landing. The answer was no. We couldn’t depict Kubrick or use any of the photographs, footage, audio or any intellectual property associated with Kubrick in Operation Avalanche—a movie completely based on the intellectual property of Stanley Kubrick. Fuck.

I had first heard about Chris Perez, a partner at law firm Donaldson + Callif, at Fantastic Fest in 2013. The Dirties was in competition with a film called Escape From Tomorrow, which set an entire psycho-sexual comedy inside Disney World without permission. When I’d asked director Randy Moore how the hell he was going to release this seemingly illegal movie, he told me about Perez, who argued that Escape From Tomorrow was perfectly legal under the definition of fair use.

From Perez, I learned that under fair use, we could use Kubrick’s old photos—and we didn’t need to seek permission to use nearly all media associated with the Apollo program, the footage we shot at Shepperton, and all the footage we would go on to shoot secretly at NASA (again, long story).

This opened our minds up to doing all kinds of crazy things we hadn’t even considered. Why not have Kubrick talk with his actual voice? Curt started pulling quotes from a behind-the-scenes doc on The Shining and matching them to Tristan’s animation. Why not have Walter Cronkite narrate the climax of the movie? All the news footage Miller thought would be prohibitively expensive (like, $1,000 per second) was now back on the table.

It felt like the warnings I had been force-fed in undergraduate film school. “Always get location releases” and “Don’t use anything copywritten” were vestiges of an old system, mired in the production models of big studios and stations too lazy to stand up for their filmmakers. Now that the independent film model has become the norm, those old ideas are atrophying. Praise be to Chris Perez.

Four months later, Tristan was putting on the finishing touches. From 50-year-old photographs, he’d reverse-engineered every major set used in 2001: A Space Odyssey. The sequence begins with me driving up to Shepperton studios, walking up to Kubrick’s actual stage, opening the gate, and quietly sneaking onto the living set. There Jared turns on the Bolex hidden in his bag and, in black and white, we go on a full tour, seeing Kubrick do everything from selecting lenses with cinematographer Geoffrey Unsworth to signing an autograph. It took us five months: days of research, thousands of hours of rendering, a dozen false starts, hours on the phone with lawyers—and in the end, the sequence runs less than two minutes. I’ve never been prouder of anything in my entire life. MM

Film Stock and Processing: Pablo Perez at Niagara Custom Labs in Toronto transferred every frame of our locked picture to 16mm stock. We shot and transferred to various Kodak stocks (#7207, #7218) along with several varying vintage stocks.

Lighting: We tried to light using only the technology that was available in the late ’60s—mostly tungsten, and vintage florescent desk lamps when called for. The moon landing set was lit more conventionally: A 12K HMI acted as the sun and we punched things up with a couple of 1Ks.

Color Grading: The final film was graded twice, the first time before we printed to film and a second grade after we re-scanned from the film stocks, by Conor Fisher at Alter Ego on a Baselight system.

How Fair Use Works Here

“Operation Avalanche uses NASA and Kubrick footage in order to establish the true, historical setting inhabited by two fictional CIA agents. Whenever a film has copyright-protected elements that help establish the story’s time period and setting, moviemakers may have the opportunity to take advantage of fair use.

(L) Stanley Kubrick on the set of 2001: A Space Odyssey. (R) A still from Operation Avalanche. Courtesy of Lionsgate Premiere

Operation Avalanche’s use of the footage is highly ‘transformative’—a term of art used by the courts in fair use cases. The original purpose of Kubrick’s films was to entertain and comment on society. In Operation Avalanche, the Kubrick films are transformed to extrapolate a commonly known conspiracy theory, and integrated into a fictional film with a true historical basis. The filmmakers inserted themselves into the footage and added other original elements that made it something entirely new.

Copyright law is a balance between the rights of authors and the need to encourage the creation of new works—which employ bits and pieces from cultural touchstones to make their points. That’s what the fair use analysis is really asking: Did you create something new?”