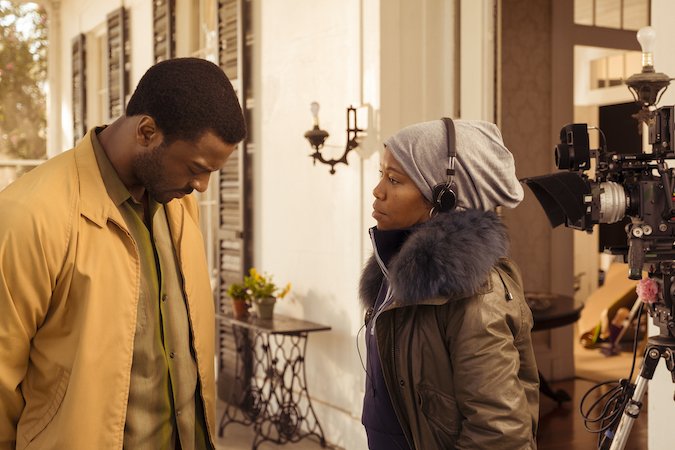 When Regina King was growing up in Los Angeles, her family ate lots of vegetables. Friends who came to her house weren’t always interested in the kale or jicama or beets her mom would offer.

But she made them look irresistible.

“My mom can eat anything and just the way her mouth moves makes it look good. She could promote any food, just by seeing her eat it,” King says. “She would probably put on a little extra when someone would say they didn’t like a certain food. She would go extra hard in making it look like you’re missing out on an opportunity of tasting something golden.”

King’s directorial feature debut, One Night in Miami, could have been an eat-your-vegetables historical drama. Based on the play of the same name by Kemp Powers, it imagines a night in 1964 when four icons — Malcolm X, Cassius Clay, Jim Brown and Sam Cooke — gather together at a crucial moment for Black Americans.

But the film doesn’t spoon-feed us nutrients and lessons. Instead, it invites us behind the doors of a guarded motel room to get to know the four icons as men. It is generous, rich in flavor, and sweet.

They laugh. They argue. We see everyone’s side. We want them all to win.

King sees it as a love story.

You can listen to our interview With Regina King about One Night in Miami on Apple or Spotify or here (story continues after audio):

“One of the beautiful things that Kemp did when writing the piece, is that he humanized them immediately. So they were Black men who were familiar to me, if you just took the last names off and just called them Cassius, Malcolm, Sam, and Jim — whether it’s Cousin Jim or Uncle Malcolm, I know these men,” says King. King has an Oscar, a Golden Globe, and four Emmys. A by-no-means-complete list of her credits includes a trio of John Singleton films, Friday, Jerry Maguire, Ray, and lead television roles on Southland, American Crime, and, most recently, the mindblowing Watchmen. She landed the job of directing One Night in Miami just a few weeks before winning her Best Supporting Actress Oscar for her role in Barry Jenkins’ If Beale Street Could Talk.

Does she, like her mother, lead by example? Do actors want to push themselves because their director is Regina King?

“I don’t know,” she says. “I think you’d have to ask that of any particular actor. But I will say that I do feel like people respect, you know, a note from me. Probably my track record might have something to do with that — that they would consider a note that I may give.” 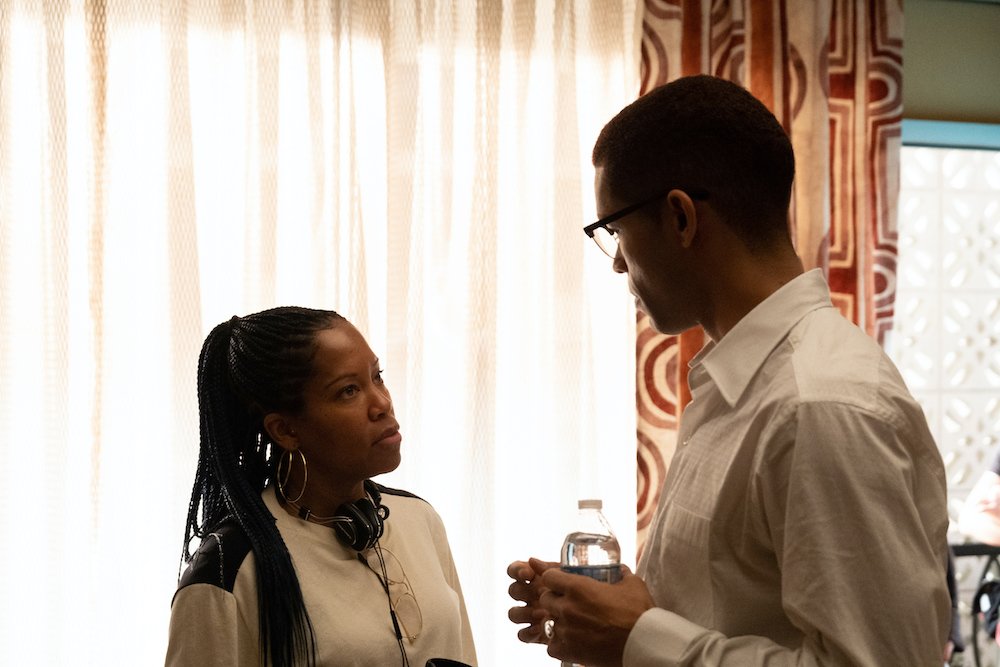 Director Regina King and Kingsley Ben-Adir on the set of One Night in Miami. Photos by Patti Perret

On the day I spoke with Regina King, she was in Santa Fe, New Mexico, on the set of her new Western, The Harder They Fall, starring Jonathan Majors, Idris Elba, Zazie Beetz, LaKeith Stanfield and Delroy Lindo. The production had been paused, like so many others, by COVID-19, but was back underway.

Many actors have a breakthrough moment, but King’s career has been a little different. She’s worked almost her entire life. Her first big role was in her early teens on the hit late-’80s sitcom 227.

She went to USC after her run on 227, and overlapped with Singleton — but never met him on campus. He was just 23 and fresh out of school when he made Boyz n the Hood in 1991.

“He told me that he saw me a couple of times at school. And he was like, ‘Who’s that girl from 227?’” she laughs. “I auditioned for Boyz n the Hood and got to know him a bit on Boyz n the Hood. But I would say after I auditioned and had gotten the part for Poetic Justice, that was when our relationship really was solidified. … He gave me an opportunity to see behind the scenes what a director does in film, and I had never really had that opportunity or experience before.”

Was that where her interest in directing began?

“I think the first seed was planted there, but I don’t know that I knew that it was being planted,” she says.

She would also appear in Singleton’s 1995 film Higher Learning, and, in the same year, Friday. The next year brought A Thin Line Between Love and Hate. She also reteamed with Cuba Gooding Jr., with whom she had worked on Boyz n the Hood, for Jerry Maguire, a film that also called for her to face off with the biggest movie star in the world.

In the film, her character, Marcee, is just starting a family with her husband, NFL player Rod Tidwell, played by Gooding. She had just given birth to her son in real life, which put everything in perspective.

“When you become a parent, just everything else that was scary or that you didn’t feel confident about or you were apprehensive about going into just kind of goes out the door, because you’re responsible for a human being,” she says. “And I think probably all of those self-doubts and things… were gone. I probably was not looking at it, like, ‘Oh, this is Tom Cruise.’

“Not that the film wasn’t a big deal. But there’s something much bigger than the film, because you’re a mother. And then also I feel like there was a lot of chemistry that was already established with Cuba and I,” she adds. “So there was just this natural energy that Cuba and I brought to Marcee and Rod that made you believe in this couple that had been together since high school.”

Unflappable as she was, Cruise caught her by surprise once.

“He did play a practical joke on me,” she says. “I’m just coming back from nursing, you know, my grandmother’s in the trailer. … I get to the set, and I’m really taking my time. And Tom’s like, ‘Regina! Regina! We’re rolling!’ So I run to the set. And standing in the middle of the set is Steven Spielberg.”

She laughs. “OK, like, a head’s up would’ve been good. I might have wanted to come in reciting a monologue or something — working for the next job. You know?” 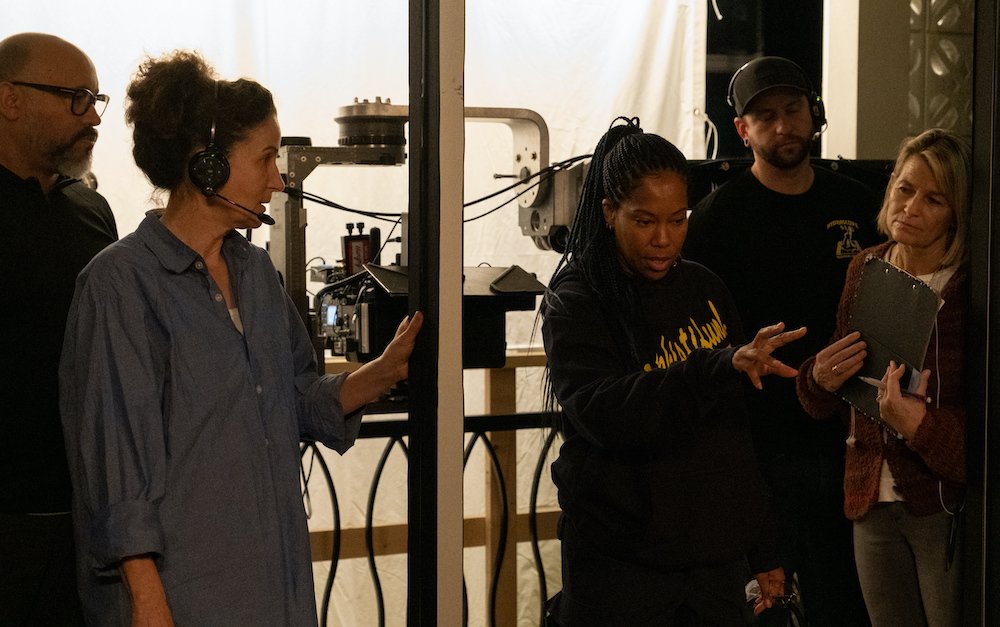 Regina King on the set of One Night in Miami

She got a lot of next jobs: in 2003’s Daddy Day Care; in 2004’s Oscar-winning Ray, in the sequels to Legally Blonde and Miss Congeniality. She also did groundbreaking work in television.

Starting in 2009, she starred in five seasons of Southland, which offered an unvarnished look at the lives of flawed LAPD cops. King came of age in the era of the 1991 Rodney King beating, a few months before Boyz n the Hood arrived on screen. The film shined a light on police harassment and brutality nearly three decades before George Floyd’s killing.

Continue for more of Regina King on One Night in Miami