How They Did It: The Director of One Less God Used "Re-Voicing" Tricks to Fine-Tune Foreign-Language Performances 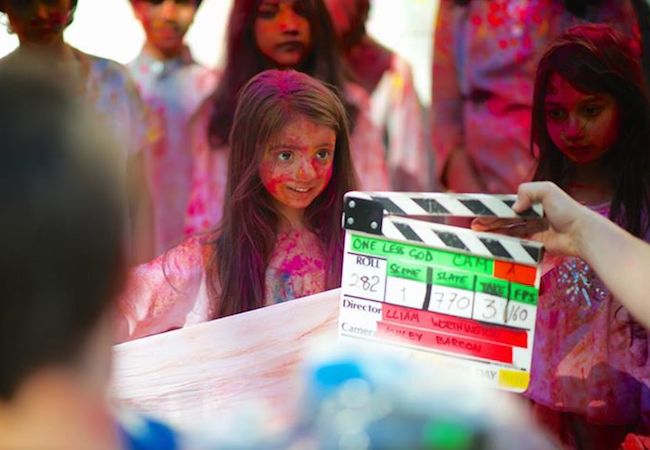 The attacks of November 2008 in Mumbai brought India and much of the world to a standstill.

Although India has endured repeated terrorist attacks, this was very much their 9/11. Yet, the nature of these attacks, while so indiscriminate, were also highly targeted. The Lashkar-E-Taiba militants attacked high value targets that were either heavily populated, iconic or popular with international tourists, their foremost target being the luxury Taj Mahal Hotel in Mumbai.

Co-Producer of my film One Less God Nelson Lau and I both had friends who lost people close to them in the attacks, yet with casualties from over 25 countries this was not surprising. Sadly, so many people are affected by these kind of attacks that you do not need to go many degrees of separation to find people who have been personally affected. The events were truly global in reach and impact, and so in my mind, only an international and highly diverse ensemble cast could hope to truly reflect their character.

Lliam Worthington directs Nicole Fantl and Nathan Kaye on the set of One Less God. Photograph by Nelson Lau

Given the world’s current political climate, I also felt it was imperative to craft a story that would be a genuine movement towards greater humanism and compassion—one that might aspire to promote healthy discussion afterward, as opposed to heightening fear or increasing polarization. To do this, it was vital that we captured the emotional authenticity of those who suffered in the attacks, but I also wanted to juxtapose that with a deep exploration of the psyches of the terrorists, then use those two conflicting, yet still parallel journeys as a means to evoke broader questions around man’s inhumanity to man and the nature of belief itself.

This combination of elements meant that it was going to be an enormous challenge, but small budget does not need to equal small ideas or themes. In fact, lower-budget filmmaking ironically lends itself to this kind of material. Still, there were some very specific challenges in relation to working with such a large international cast.

Your Approach to Directing Actors Should Be Shifting, Not Static

People often ask me, what is your method or how did you approach directing your actors? Every human being is a universe unto themselves, and every moment has a great many shifting variables, so I don’t see methodology as being fixed, or static. It needs to be dynamic in nature and shift as required. As it’s not just one thing that works for one actor might not work for another, it’s one thing that works for an actor only half an hour ago may not work now. Just like life, it’s a relationship, and you need to live it moment by moment and apply your own tools and skills as required.

Lliam Worthington and crew prepare to shoot a scene from One Less God in a mirrored-room set. Photograph by Nelson Lau

Listen Intently to Cut Through the On-Set “Noise”

You need to see the world as it is, because that’s what you must work with. Don’t simply hold the performance up against what you think it should be. Otherwise, your relationship with your actor will be essentially one-sided, like a conversation where you are not even listening to what the other person is telling you. You need to listen intently. And doing that on a set with all the technical and logistical consideration and “noise” that  takes place is a very real skill. For me, to be entirely honest, I learned it more from my background in martial arts than I ever learned it from acting school or in my training as a director.

In working with such a diverse cast, I think it is this skill of truly listening—and by that I mean mentally, emotionally, and physically—that is of the most value and import. The demands on this were significantly amplified by both the sheer number of actors and in working in multiple languages that I did not speak myself.

As a director your foremost responsibility is to be of service to your actors. To do this, I really had to zero in on not just the mechanics or broader emotional beats, but the subtler rhythms and transitions that the actor is, or perhaps is not, making. It can be both liberating and challenging. It’s somewhat akin to acting exercises where you dispense with words and interact just through looking and listening such as in Meisner, or when using jibberish or just sounds instead of words to focus upon the intention and emotion and shift the actors attention from only being cerebral.

Kabir Singh in a scene from One Less God. Photograph by Nelson Lau

This can be incredibly tricky when working in languages like Hindi or Urdu. The sentence structure is not like English: subject—verb—object. Hindi is instead subject—object—verb. So key words that you may intuitively find yourself listening for, like, say, the word ‘”elevator,” in the line “I want you to take the elevator to the 10th floor,” will not be where you expect it to be, and the lines themselves can be up to three times as long in their rhythm, so you can easily lose your sense of where you are. (If you are not very fluent in both languages, it will also make subtitling a lot more challenging, and this goes some measure to explaining the bad subtitling phenomenon so often chuckled about.) This approach was generally very successful, but I have to confess there was one who actor who managed to completely fool me on set.

Phillip RK John, who plays The Handler, was not a native Urdu speaker, but he is, however, a very talented actor with a beautiful timbre in his voice—that James Earl Jones kind of voice that can literally say, “Please tell me the way to the bathroom,” and you intuitively pause to reflect upon the wisdom that has surely just been imparted.

Phillip and I had worked together for a long time to create his character, so that for the two months leading directly into shooting his scenes he could focus upon working with his dialogue/language coach. We had mapped in a lot of the subtext and emotional beats and we both felt we were in really strong territory performance and connection-wise. On the day of the shoot, we also had his coach on set to help correct any pronunciation mistakes and do any line prompts he might be struggling with. We also decided to break his dialogue and shots down into smaller more manageable pieces.

As expected, there were still stumbles, so his coach would feed in a correction for pronunciation or prompt a line until he had successfully mirrored it, and it all really did sound powerful on set, live. It was not until the edit when I began to construct the scene that I truly began to see the problem: The performance was strangely off. It had changed.

I realized what had happened: Phillip’s intonations and rhythm had begun to mirror his coach’s, and in subtle but important ways it had effectively become her performance, not his. She was not an actor, but I effectively had the dialogue coach’s performance on-screen. In the heat of being on set, and with the scenes broken into the smaller chunks, coupled with the power of his voice, I simply missed it on the day. What to do?

Reilly O’Byrne-Inglis in a scene from One Less God. Photograph by Nelson Lau

The way we chose to shoot the The Handler—soft focus, out of frame—you never get to fully zero in on his identity, so we didn’t need to do a reshoot, we could just re-voice. With a skillful enough actor, this actually turned out to be an optimal way to do it.

Now that we had the physical performance captured, Phil no longer had to concern himself with anything but his vocal performance and technique. It worked so well that I decided to use this to help improve one of the other character’s technical performance as well. It would have been so much easier just to shoot in English or even Hindi, but the authenticity was so important to us, and the result, we’ve been told by fluent Urdu speakers, is faultless.

One Less God was made by people of many different faiths: Muslim, Hindu, Christian, Jews, Buddhists and those of no faith as well. Together, we have made a deeply humanist film that shrinks from nothing, and that is vital right now in this divisive political climate. That could never have been achieved without working with such a diverse international cast. Beyond the worth of the film itself, we’ve also become one giant family, and with my own roots in theater and circus, having that kind of extended family—especially one so culturally rich and diverse—has meant the world to me. MM

One Less God premieres June 8, 2017 at the Dances With Films Festival. For more information, visit here.

Continue Reading
Advertisement
Related Topics:Dances with Films, how they did it, Lliam Worthington, One Less God, Phillip RK John

How They Did It: Burning Annie Arrived at Distribution After a Long, Long Decade Of Catastrophes
From Russia With Love… and Money: How Moscow Never Sleeps Secured Funds By Any Means Necessary