On The Divide: An Abortion Fight at the Border Plays at the rePRO Film Fest 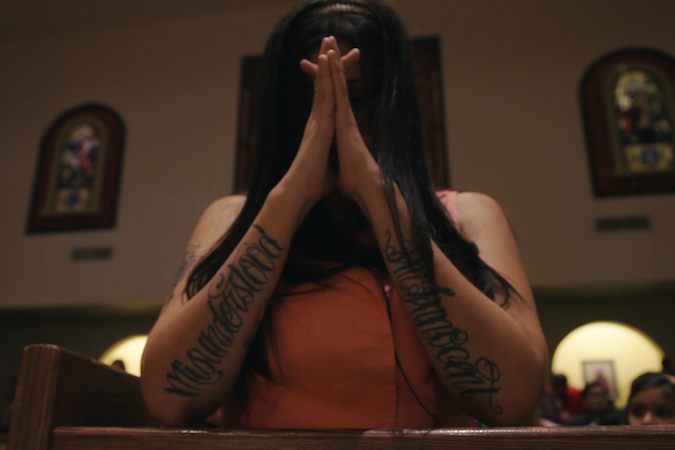 Directors Leah Galant and Maya Cueva didn’t set out to make a film about the last abortion clinic in Texas’ Rio Grande Valley. They were Ithaca College students in South Texas to film a women’s rally when they stumbled on the inspiration for their first feature, On The Divide.

The Whole Women’s Health of McAllen is a crucial location in the abortion debate both because it is so near the U.S.-Mexican border, and because the next closest clinic is 230 miles away, in San Antonio. The filmmakers witnessed many clashes between the employees and pro-life protestors hoping to stop them.

They were careful to profile Latinx women whose polarized views complement and challenge each others’. The film focuses on Mercedes, a pro-life protestor, Denisse, a clinic escort, and Rey, a clinic security guard.

It was difficult to raise money for On The Divide, Cueva says: “This was a very independent film and it’s about abortion, so it was not the easiest to fund.” She says the funding process shouldn’t have taken so long, but did have an unexpected benefit: She and Galant had more time to tell their subjects’ stories.

“They are the people at the frontline of the issue with nuanced relationships with religion and abortion,” Galant says. “We were trying to break up that dichotomy that you’re automatically anti-religious if you’re pro-choice.”

“It’s more, ‘What does it mean to make personal decisions,” adds Cueva.

But On the Divide has found success on the festival circuit, earning a spot at the 2021 Tribeca Festival and, now, becoming one of three featured films in a film festival dedicated to reproductive justice: the rePRO Film Festival.

Created in 2020, rePRO’s goal is to lift creators such as Cueva and Galant and create awareness for reproductive issues, ranging from abortion to lesser-known issues such as endometriosis or postpartum depression.

Festival creators Mallory Martin, Lela Meadow-Conner, and Debby Samples wanted rePRO to be more than streaming films — it includes discussions, directors panels, and even a festival lipstick shade. The lineup features only female or nonbinary filmmakers, 60% of whom are Black, Indigenous and people of color. All proceeds go toward paying the filmmakers and donations to the Black Women Health Imperative, the Lilith Fund (an abortion fund for Texas citizens), and No More Secrets (a fund to provide free menstrual products).

As Samples puts it: “Why did it take so long for film festivals like us to be around?”

You can stream On The Divide on Wednesday, or watch the festival’s other featured films and shorts this week until Thursday at rePRO. Audience members can also participate in the Call to Action discussion for free.

Main image: Mercedes from On The Divide, courtesy of K2 Publicity