On Failure, or: Nick Toti on His New Documentary, KILL, KOBEK… KILL!

Nick Toti is a filmmaker, writer, and educator whose latest film, KILL KOBEK…KILL! can be viewed above.

One of the ideas swirling throughout David Shields’s book How Literature Saved My Life is that there’s only one subject: failure. The history of literature is the history of human failure.

Cinema is the opposite. Cinema is about the iconography of success. It’s the only artform that was born entirely from capitalism. We invented motion cameras for science, but we continued innovating and experimenting, eventually resulting in a whole new medium for creative expression, in order to produce buckets and buckets of money.

I should have been a writer. I’m obsessed with failure.

But writing requires discipline, and filmmaking only requires convincing people to humiliate themselves on camera. That’s easy. Eadweard Muybridge invented the motion camera and then immediately convinced people to strip naked and wrestle in front of it. People will do anything if you point a camera at them. That’s how I became a filmmaker: by failing to become a writer.

It makes sense that I’m drawn to collaborate with writers. In the past two years I’ve finished five projects that are either adaptations of literary works or documentations of writers engaging with their craft. Each of these works had its online premiere on the blog of a cult writer, which draws an audience largely composed of other writers.

My movies are not very popular.

Only Americans Burn in Hell

In 2019, I released an experimental feature that was an adaptation of the book If You Won’t Read, Then Why Should I Write? by the Turkish-American writer Jarett Kobek. Kobek liked the movie more than I expected him to, but he was even more impressed by the fact that I made it at all.

That’s where Kobek had me wrong. I rarely back down from my idiotic ideas.

So Kobek hit me with an idiotic idea of his own. In the time since his unexpected success with I Hate the Internet, his career had taken a very public nosedive. His follow-up novel, The Future Won’t Be Long, had been released by one of the biggest publishers in America, and it had tanked.

The Future Won’t Be Long was one of the biggest literary failures of 2017.

This left Kobek in an interesting position. He decided that, instead of playing it safe with his next book, he would steer the ship directly into the iceberg. He wrote another novel called Only Americans Burn in Hell, and he used this novel to condemn the publishing industry by airing out its dirty laundry. He also used it to rail against the hypocrisies he saw in his own political allies.

Only Americans Burn in Hell is a leftist American author’s 250-page rant against the left, America, and literature. It’s wonderful.

The problem, though, was that Kobek now had to somehow promote this book that meticulously insults everyone who might possibly be useful to his career.

This is where I come in. 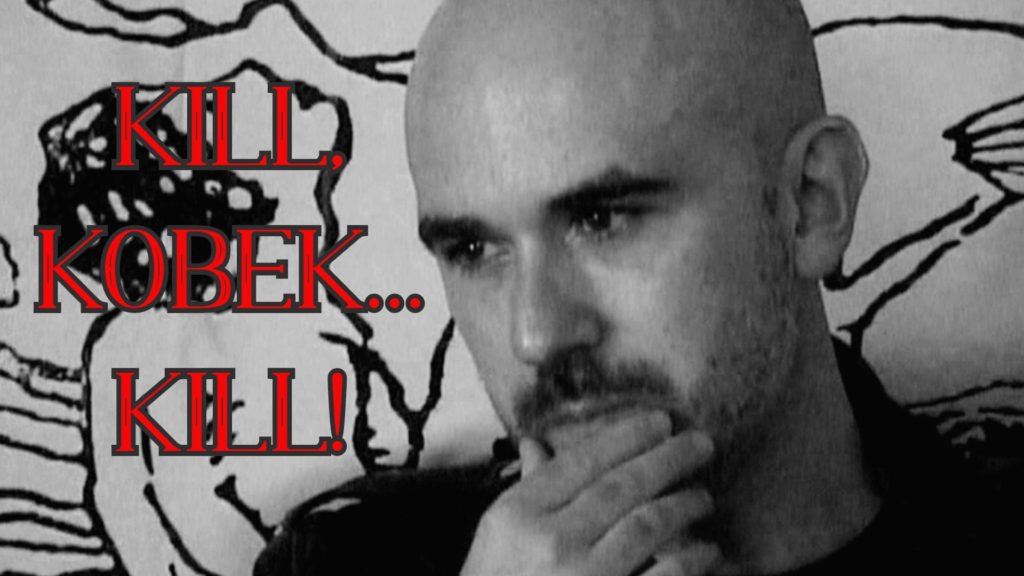 KILL, KOBEK… KILL! (i.e. the ostensible subject of this essay)

Kobek’s idea to promote his new book was to go on right-wing media and hopefully get into childish arguments with people like Ben Shapiro. These publicity stunts could then circulate online and create a viral sensation, ultimately selling more books than he could following traditional methods.

He asked me to come along and document these encounters.

His thought was something like, “If I go on these shows in good faith, and then antagonize the host into vulgar name-calling, what’s to stop them from simply not airing the show?” By having his own crew there documenting as well, the footage could still get out.

My thought was something like, “What a terrible idea. This is going to be great!”

So I agreed to document these events as long as Kobek was fine with me using whatever footage we got to make my own movie. I would give him immediate access to any potential “viral moments,” but the rest was mine to use however I wanted.

The end result of this (mis)adventure is the movie KILL, KOBEK… KILL!

I won’t give away anything specific about the plot, but just know that nothing goes according to plan. By any rational standard, we failed completely in what we set out to do.

But this is okay. Well, it’s okay for me. I don’t need to sell any books.

KILL, KOBEK… KILL! is a movie that has failure in its DNA. Kobek and I are both unusually self-deprecating people, and this comes through in every shit-talking conversation in the movie. I shot everything on a twenty-year-old consumer-grade miniDV camera with no attempt at looking professional. Sometimes the lighting is so bad that I had to add a grating black metal soundtrack just so the unpolished “aesthetic” comes across as intentional.

I think that, if the movie succeeds in anything, it succeeds in capturing the chaotic, irreverent joy of knowing that everything is hopeless. Failure is the only truly renewable resource.

Conclusion: On Failure (i.e. the other ostensible subject of this essay)

I’m left wondering why failure is such a good topic for literature but not cinema. Actually, that’s not what I wonder. I wonder why filmmakers are so much more reluctant than writers to steer the ship directly into the iceberg.

I wonder about this from a position of phenomenal privilege, but it’s a privilege that has nothing to do with my white-heterosexual-maleness.

My real privilege is that I know I’m completely hopeless.

I work a full-time day job that has nothing to do with filmmaking. I save as much of the money I earn as possible and then spend it on making movies that relatively few people will ever watch. I have no idea why I do this. Filmmaking is incredibly frustrating and often humiliating. This essay is humiliating because my failure is now public.

But public failure is funny. And fools, at least according to literary tradition, were once considered sources of divine wisdom. So take pity on me. Watch my movie. Send it to a friend.

And remember these poor fools the next time you’re begging some rich asshole for permission to make your next movie.

Was Showgirls… Good? You Don’t Nomi Re-Examines a Notorious Bomb
Watch a First Look at The Rental From Dave Franco (Video)