The Old Guard Is Like The X-Men, If All the X-Men Were Wolverine (Podcast) 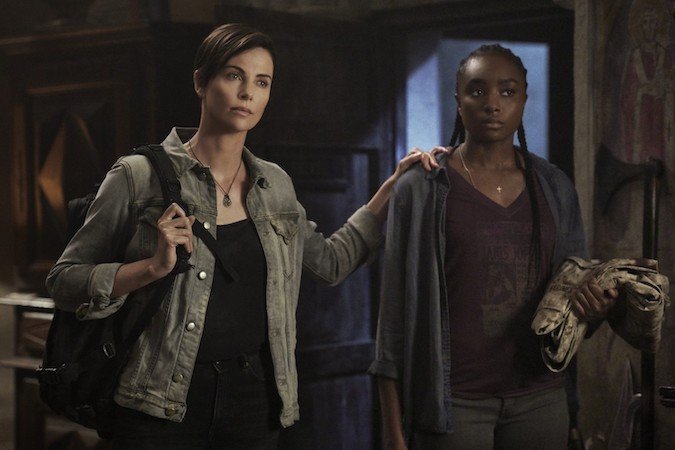 The cat eventually gets out of the bag and a new immortal (Kiki Layne) is discovered while the team is on the run from an unknown enemy. The setup is full of action and mystery that continues until the credits run. It’s kind of like The X-Men…. if all of the X-Men were Wolverine.

You can listen on Apple, Spotify or right here:

Every movie in this genre needs good set pieces, and The Old Guard excels in this department. Craziness comes early and often with hand-to-hand combat, huge explosions, and guns blazing. The choreography is well-executed throughout and takes places in locations all around the globe.

The locations involve an Afghan drug-courier plane, a French church, and a British skyscraper for an evil tech firm. Fans of the comic book will definitely enjoy this adaptation given the film is a straight retelling of the original story — with one huge exception involving the oldest immortal.

Also Read: A Charlize Theron-Keanu Reeves Action Film? She’s ‘All About It’

Netflix definitely intends for The Old Guard to be a hit given its star-studded cast, which also features Chiwetel Ejiofor. It certainly deserves its spot on Netflix’s coveted Top 10. The Old Guard would be worthwhile for fans of the action and fantasy genres even if everyone weren’t currently barred from watching a summer blockbusters on the big screen. Give it a watch and then join Keith Dennie, Tim Molloy and me on the Low Key podcast for a fun breakdown of the film. If you like it, feel free to subscribe and rate us.

The Old Guard, directed by Gina Price-Bythewood and starring Charlize Theron, is now streaming on Netflix.