Stealing the Shot: Ocean’s 8 Cinematographer Eigil Bryld on the Style and Influences of a Scenic Career

Danish cinematographer Eigil Bryld is an inspired choice to shoot Ocean’s 8—a heist caper that looks gorgeous but not so Clairol-slick that it distracts from the fast-paced action and suspense. The female-centric caper (directed by Gary Ross) is still in the top five at the box office within its five-week run.

One of the Ocean’s 8‘s many pleasures is Bryld’s choice to look at the City with an outsider’s gaze. The New York scenes are great fun, especially watching Debbie shoplift at Bergdorf Goodman, eat at the Ukrainian restaurant Veselka in the East Village, and later watch all eight women swan down the stairs of the Met in gowns by Alberta Ferretti, Givenchy and Zac Posen.
Bryld is also terrific at composing intimate, less showy shots. They suggest the shared history and relationship between Bullock and Blanchett’s characters by the way he frames them sitting or walking together.
It’s become a cliché to describe locations as another character in a movie, but it’s an apt description for Bryld’s work In Bruges, Tulip Fever and now Ocean’s 8. Bryld has a gift for shooting cinematic spaces and locations and making them vibrant and alive. You feel you are there, whether it’s a Medieval village in Brussels or a modern-day diner in Brooklyn.
Currently Bryld lives in New York with his wife and children. He conducted the following interview entirely via email over the course of nearly a month while he was dong “promo for a Netflix show in Mexico” he wrote. Last month he  wrapped up The Torture Report, a film on the timely subject of extreme interrogation tactics in the aftermath of 9/11.

Paula Schwartz, MovieMaker Magazine (MM): When did you first realize you wanted to become a cinematographer?
Eigil Bryld (EB): I grew up in a small town in Denmark and was very interested in politics and world affairs. I wanted to make documentary films. But I was from a family of academics, so I was unsure how I could get to do documentaries. I considered studying anthropology, but towards the end of high school I met a friend of my brother who had just enrolled at a documentary photography course at Gwent College in Wales.
Shortly after I applied and was admitted to the film and video production course at Gwent. During my time there I started watching a lot of art house movies at the local cinema. I watched Klute, Days of Heaven, The Double Life of Veronique…I started realizing that these movies had a very strong effect on me. They were a window into the world that I so desperately wanted to explore.
MM: How did you go about pursuing your career after school?
EB: After completing the two year course I spent some time in London where I shot no-to-low budget shorts. Times were hard in the UK during the early 90’s so I eventually returned to Denmark-Copenhagen. Zentropa had just launched and there was also a film workshop in Denmark where anyone could apply for production grants (and most equipment) for art movies or alternative projects. Here I met two filmmakers—director Ander Klarlund and producer Thomas Mai. They had a very ambitious sci-fi short they wanted to make. After making the short Anders had another, longer short that we started working on. We did a lot of work on the phones getting free stuff for a screen credit, free cars from Avis, cheap phone lines, all the things a production needed, including development and film stock.
To keep our cost down (we had no money), we approached Zentropa (a Danish film company started in 1992 by director Lars von Trier and producer Peter Aalbæk Jensen) to see if they could help us out. They looked at our script and pointed out that there was an error in the scripts line spacing. When corrected the script was not 60 pages but more than 90, so it was a feature film. But they liked the script and our enthusiasm and energy so they let us buy the film stock through their account so we would get their discount. They also let us use their grip and electric equipment. This became our first feature, Den attende in 1996, which was shown at the New Directors/New Films Festival in NYC. Here I met James Marsh and we did a movie together called Wisconsin Death Trip in B/W and color.
MM: What makes you happy about your job?
EB: One of the pleasures of my job is working with many different people and sensibilities. I always try to do projects that present new creative or logistical challenges. Not project a style over the movie but rather seek to find it through the process of making it (usually) with wide lenses. I like to have the camera close to the action, engaged in the drama. Often I try to embrace natural light when possible. I try to make complex (situations) through simple (processes). To be economical, adaptable, understand the material and the scene, understand the weather, how the light will move. Then trying to build layers and expand the moment up until the point where everything falls into place and the cameras start rolling.
MM: What draws you to specific project?
EB: If I read a script and it excites and scares me a little it’s usually a good start. 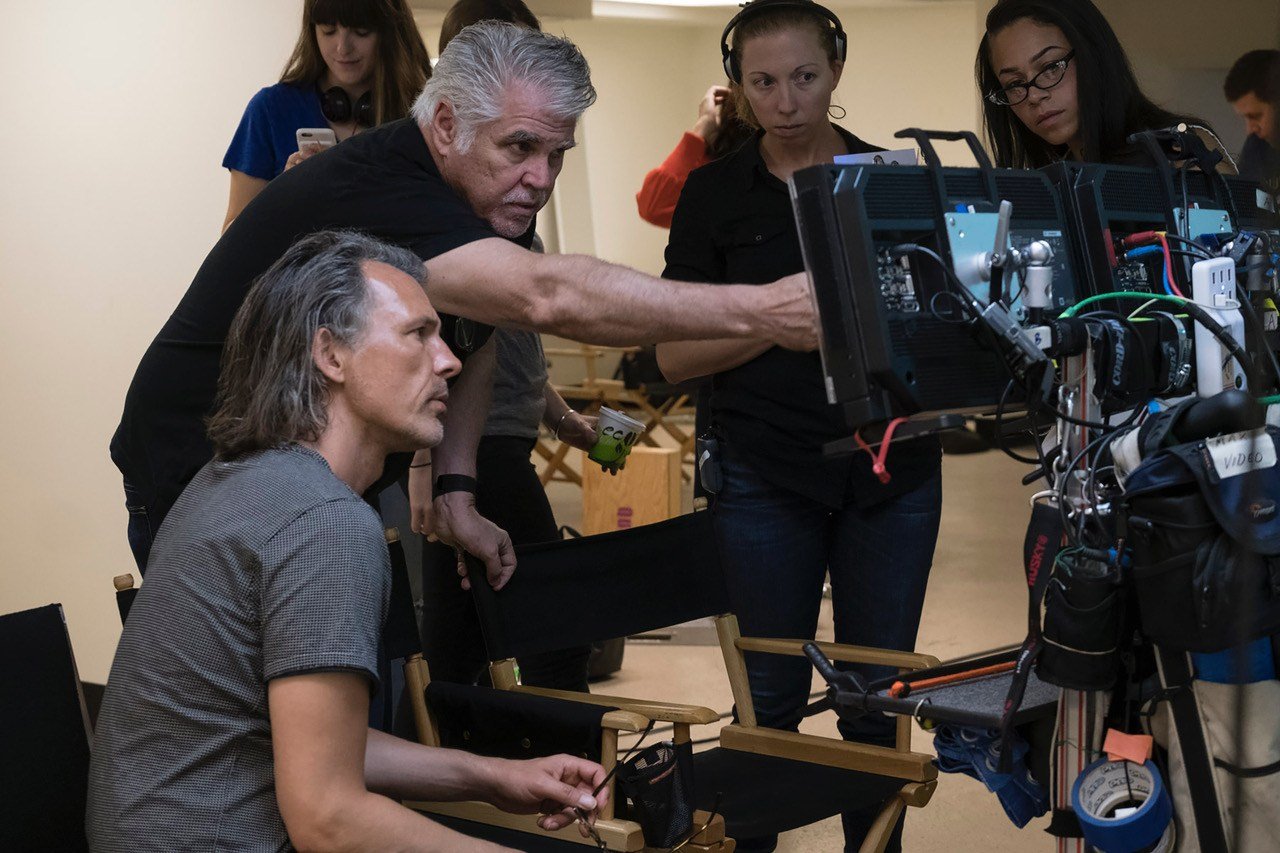 MM: Who are the cinematographers that inspired you?
EB: All the 70s guys, notably Gordon Willis and Nestor Almendros. I loved the energy of filmmaking in the late 60s/early 70s. Filmmakers started using real location, used handheld cameras and did gritty realistic movies like The French Connection.
MM: What was your approach to shooting a period piece like Tulip Fever set in 17th Century Amsterdam? How is different from shooting a film set in contemporary times?
EB: On one level the film is about youth and age. The direct light helped tell that part of the story. I controlled the contrast with small lead panels in the ceiling but generally it is a high contrast movie which helped bring out color, texture and shape. When shooting nights I was very aware that light deprives you of your night sight. So the classic image of a person wandering around with a lantern or candle is not always realistic as in reality you would mostly see the candle and your hand—not what’s in front of you. We used a lot of real fires for illumination that gave a nervous flicker and moving shadows.
MM: What was your cinematic approach to shooting Ocean’s 8?
EB: I wanted Ocean’s 8 to feel like a drama with depth, darkness and sense of space inhabited by sparkling gems of all sorts. One has to realize on a movie like this, with so many spinning wheels and gears, you have to keep moving it along. One has to be very fluid and roll with the punches, being quick to adapt and strike when opportunities present themselves. I knew Ocean’s 8 didn’t call for a high key all the way through; there had to be room for the drama and suspense. I wanted Cate’s loft to feel like a secluded, mysterious den. Away from prying eyes so I kept the light down and incidental.
I knew right away that I had to shoot around T4 to not get into trouble with focus on group shots. This went hand in hand with using zooms extensively. We carried a set of master primes, but mostly shot on optimo 12:1, Master zoom and short optimo zooms. On Wizard of Lies I used zooms to magnify Bernie Madoff (Robert De Niro) to get under his skin. In Oceans the zooms were used to direct attention in the shot and propel the drama and suspense. We had a techno crane everyday and wanted to keep the cameras very fluid for a retro jazzy feel. A lot of the score was made before we started shooting. It was a very informative way of communicating the feel of the camera moves.
MM: Sandra Bullock, Anne Hathaway, Cate Blanchett–all of the women look gorgeous. What were you striving for in capturing their beauty and not it too distracting?
EB: It was important to strike a balance between cosmetic and natural lighting. I didn’t want the movie to look like an Advil commercial. It was important to have a mobile camera and light the spaces they inhabit with character and mood. True beauty is capturing the character. I thought of it as a drama with women using their skills and imagination to pull off an audacious heist.
The style shouldn’t choke the movie but rather add energy and vibrance. MM
Ocean’s 8 is now showing. Images courtesy of Warner Brothers.
Continue Reading
Advertisement