When Amber Sealey first read the script for No Man of God, her new Ted Bundy film starring Elijah Wood as FBI analyst Bill Hagmaier and Luke Kirby as the famed serial killer, she knew that the film had to be directed by a woman.

“My first thought was, like, ‘Another Bundy movie?’ And then my second that was like, ‘Me directing a Bundy movie?'” Sealey joked in an interview with MovieMaker’s Micah Khan. The film is now in theaters and on VOD.

“Then I read it and I had a take, and I had a version that I wanted to make. And so I thought, fuck it, I’ll go in there I’ll pitch my version. If they like it, great. If they don’t, no problem. So I went in there and pitched it and I said at the end… ‘Listen, I don’t care if you hire me or not, but you need to hire a woman director. You cannot, in this day and age, have a movie about two white men sitting in a room talking about raping and murdering women and not have a female director.'”

The production company behind the project, Elijah Wood’s SpectreVision, was immediately on the same page. They agreed with Sealey’s vision for the film, quickly hired her as the director, and got to work.

Sealey explained that one way she was able to draw attention to the voyeuristic, misogynistic elements of America’s Bundy fascination is through shots of his victims looking directly into the camera, as if to ask, “Why are you so fascinated with this guy?”

But because a lot of the film’s budget had to be spent on COVID-19 safety protocols, Sealey says, they had to get creative with casting. 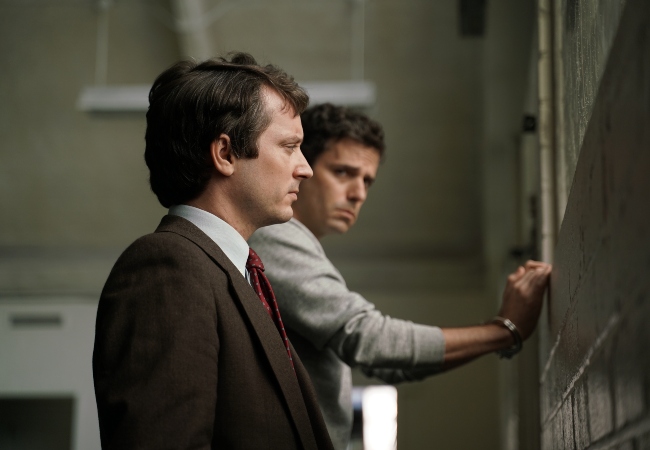 Elijah Wood and Luke Kirby in No Man of God, courtesy of RLJE Films

Also Read: Why Luke Kirby Hesitated to Play Ted Bundy in No Man of God (Video)

“Everything got squeezed, and that meant the number of actors that we could cast got squeezed. And so we had to use our background actors as the women in the movie — the victims,” Sealey says. “I dressed them like [the] actual victims so… the point is that they’re sort of, they are taking increasingly bigger and bigger looks at us, the audience.”

Sealey says it was essential for Bundy’s victims to have a voice in the film.

“We copied the most iconic photos of the victims, because I just felt like, I just can’t make this movie without some very strong presence of the victims, you know?” she says. “But they’re not written into the script at all and I didn’t — it felt cheesy to sort of write them in, and I also didn’t want to do the typical list of their names at the end of the movie. I just felt like that has been done. I was like, ‘How can I sort of impart this, like, importance of them, and kind of honor them in a way that’s not cheesy and it’s not offensive?'”

As the movie goes on, the straight-to-camera looks slowly increase.

“As you watch the movie it grows, right? Like the first woman is just a passing [glance], she just looks and she kind of looks at Bill and you don’t think anything of it,” she says. “I wanted there to be that feeling of us going like, oh, I’m — complicit is not exactly the right word, but you know, we all as audience members and members of society, where we put our attention matters. And that’s really all I guess I was trying to say. It’s just like, you know, where you put your money matters, where you put your attention matters.”

You can watch the full interview above.

No Man of God is now in theaters and on VOD.

Main Image: Luke Kirby and Aleksa Palladino in No Man of God, courtesy of RLJE Films.

This story was originally posted on Aug. 20 and has been updated with the release of No Man of God.