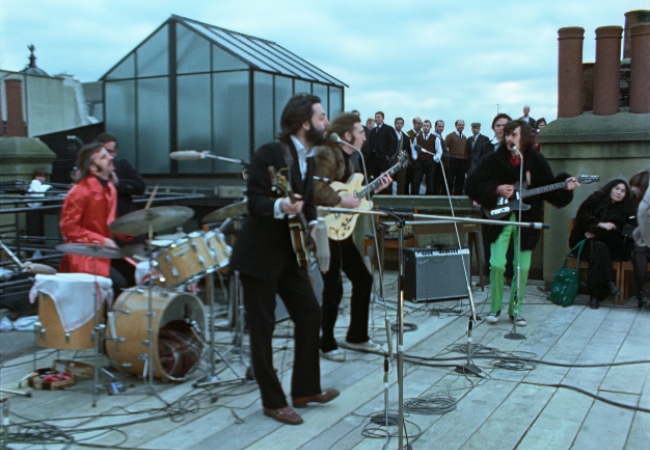 The Beatles: Get Back trailer includes never-before-seen footage of the Fab Four; Jennifer Lawrence has an R-rated comedy in the works with a writer from The Office; Jamie Lee Curtis dresses up as her mom on the Halloween Kills red carpet. Plus: William Shatner is a rocket man. All in today’s Movie News Rundown.

But First: As you await our fall print issue — arriving on newsstands soon! — here’s our cover story interview with Last Night in Soho director Edgar Wright and star Thomasin McKenzie about the dangers of living in the past. “It might be great to go back. But that doesn’t mean that everything was great then,” Wright tells MovieMaker.

The Beatles Get Back: The trailer is out for Lord of the Rings director Peter Jackson’s three-part Beatles documentary series, The Beatles: Get Back, which is premiering on Disney+ just in time for Thanksgiving on November 25-27. This is happening because 52 years ago, the Beatles — also known as, if I may editorialize, the greatest band of all time — spent a fateful 21 days in the studio in January 1969 trying to write a whole bunch of new songs in preparation for their first live show in three years, which would become known as the famous rooftop concert on London’s Savile Row. Those songs ended up making it onto their final two albums, Let it Be and Abbey Road, and the rooftop concert became the last they ever played. Lucky for us, all of that good stuff was caught on film. Sixty hours of footage and over 150 hours of audio were captured during those three weeks, and while some made it into the 1970 Beatles film Let It Be, the majority of it has been locked in a vault for all of these years — until now. Prepare your classic rock-loving family members for a marathon Thanksgiving weekend watch fest and check out the trailer below.

J Law’s Take on Risky Business: An R-rated comedy starring Hunger Games star Jennifer Lawrence and directed by The Office writer and co-executive producer Gene Stupnitsky has landed at Sony. It’s called No Hard Feelings, and according to Variety, the film is going to be in the ballpark of Tom Cruise’s 1983 classic Risky Business and the 2011 Cameron Diaz movie Bad Teacher, on which Stupnitsky served as executive produce and writer.

Jamie Lee Curtis Channels Her Mom: The Hollywood Reporter captured a photo of Curtis on the red carpet of Halloween Kills dressed as Marion Crane from Psycho, a role played by her mother Janet Leigh in the classic Alfred Hitchcock psychological horror film.

William Shatner Is Officially a Rocket Man: Star Trek’s Captain Kirk finally made it to space today. The New York Times posted live updates about his successful Blue Origin flight he shared with Audrey Powers, a vice president of Jeff Bezos’ Blue Origin, and two men who paid for their flight, Chris Boshuizen and Glen de Vries. The Times also notes that today’s blast off and splashdown makes the 90-year-old Shatner the first nonagenarian to cross the Kármán line, which is the boundary between the atmosphere and space 63 miles above our planet. Congrats on reaching the final frontier, Captain Kirk — Spock would be proud.

Kumail Nanjiani Is “Huscular”: That’s a combination of husky and muscular, according to a server named Jason who waited on Nanjiani and Vulture reporter E. Alex Jung as they conversed for a Vulture profile on the Eternals star confronting his body image. If you don’t remember, some extremely buff photos of Nanjiani went viral in 2019 after the actor decided, of his own accord, to get swole for his role as Kingo in the Marvel movie, which comes out next month. Nanjiani talks in the very good Vulture piece about what it meant for him, personally and culturally, to get shredded.

Before You Go: Please enjoy this sequence of “Fool on the Hill” from The Beatles’ Magical Mystery Tour movie. I particularly enjoy the part when Paul McCartney joyfully clicks his heels together while skipping up a hillside. And that recorder solo? Just incredible.