With three days to go before the premiere, Neil Gaiman’s loyal fanbase is eagerly awaiting the small-screen adaption, by the Starz network, of his trippy 2001 novel American Gods.

With a popularity comparable to George R. R. Martin of Game of Thrones fame, the prolific Brit writer is a master of short fiction, novels (cinephiles know Coraline and Stardust, both adapted into features), graphic novels, audio theater and films.

American Gods stars Ian McShane (Deadwood) as the mysterious Mr. Wednesday and Ricky Whittle (The 100) as the just-out-of-prison Shadow Moon, who gets yanked into service as Wednesday’s chauffeur. They go on a hallucinatory road trip across the country, during which Wednesday, unknown to Shadow, will attempt to enlist old-world gods for battle against new-world deities personified by modern technology.

The series features an eclectic and star-studded cast, assembled by the experienced and successful producers/showrunners Bryan Fuller (Hannibal) and Michael Green (Logan), who have written most of the first season’s eight episodes, all under the watchful eye of the novel’s creator. To make the story more topical, the action has been moved from 2001 to present-day 2017 and delves deeper into American conversations on race, immigration, civil liberties, corporate greed and faith.

Gaiman was in Manhattan recently to talk about the new series with press and fantasy bloggers. Gaiman is brilliant and likeable, but speaks very slowly; a response to a single question can take up five minutes. He told us that the first eight episodes of season one only cover about a third of the book, and that he’s working closely with Fuller and Green, adding characters and scenes that are not even in the books. They’re anticipating—with Gaiman’s blessing—that the show will run many seasons.

Gaiman enjoys interacting with his fans. He’s active on social media, running his own website and tweeting regularly. A fantasy writer told me she tweeted Gaiman asking for suggestions as to what book she should read next. She never dreamed he would get back to her, but within hours he sent her a list of book suggestions.

Following are edited highlights from the Neil Gaiman with selected press.

What inspired you to write American Gods?

Neil Gaiman (NG): In August of 1992 I moved from England to America, and I was a young writer. I’d been visiting America and writing about America for at least the previous five years and I’d grown up watching American television and American movies, so I thought I knew all about America. Then I moved out to rural Wisconsin and discovered incredibly quickly that I knew absolutely nothing about America. The place I was in was so much weirder than anything I could have possibly imagined. I would turn to other people around me and I would say, “Isn’t that weird? And I’d say, “Look this thing where they’d drive the car out into the ice as soon as the lake’s frozen solid and they take bets on when it’s going to melt enough for the car to go in. Isn’t that weird?” They’d go, “No, no, no. It’s what you do out here.” 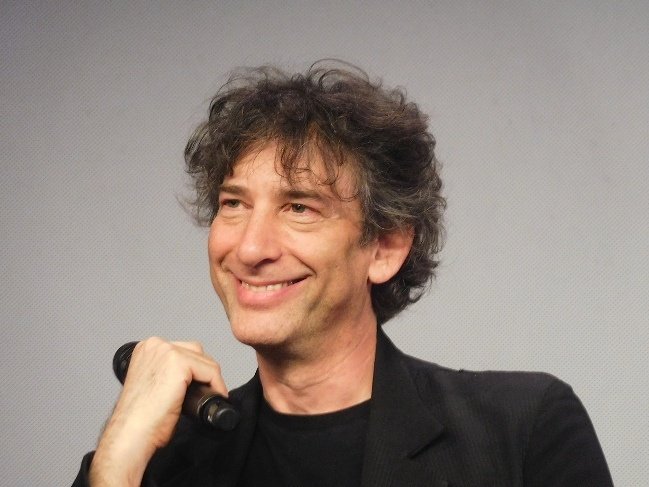 I drove my daughter to Stevens Point in Wisconsin for a camp thing, and on the way we followed the signs to where all the tourists were. They were all standing there in front of a trailer truck, a huge glass-sided truck, and inside the glass was a yellow plastic replica of the largest block of cheese in the world in 1961, as displayed in the World Fair. People are coming up and looking at this giant replica of a plastic block of cheese and going away very happily, and I’m going, “Don’t you see anything peculiar in this?” And they’re going, “Oh, obviously that’s what you do in America; you look at the giant block of cheese.” [I said,] “OK, I have to understand this place. I have to understand what it’s about and I want to write about the place that I’m in,” and that really was the starting point. Just feeling like a stranger in a strange land, and from there stuff accumulated.

Talk about immigration as a major theme of the book and the show.

I wanted to do something about immigrants and the immigrant experience and the fact that you’re in this country where basically everybody came here from somewhere else at one time or another: whether they were crossing the land or coming in small boats 20,000 years ago, or whether they were abducted in chains, or whether they were sentenced to come here because England didn’t have prisons and they just sent people out here. Whatever the reasons for coming here—fleeing persecution or seeking a new land or whatever—everybody came here from somewhere else, which at the time seemed like a fairly politically non-contentious thing to have observed. I did not think that this was ever going to be the kind of thing that if you actually said it aloud, you’d see people go, “We will boycott your left-wing show.”

I was in Reykjavik, Iceland, in the summer of 1999. I was looking at the tabletop diorama of the voyages of Leif Erickson going from Iceland to Greenland and then in to Newfoundland and then going back, and I thought, “I wonder if they brought their gods with them?” And then I thought, “I wonder if they left their gods behind when they went home?”

How did you see modern technology as gods?

It was like, I can take all the cultures that come to America, and I can give them gods. All these gods are going to be struggling out there on the edges in much the same way that the cultures that you bring with you get absorbed into America and struggle out on the edges. And I will set them against the stuff that takes our attention and takes our energy now. If you came down from space and you said, “Well, what do human beings worship right now,” you’d be going, “Obviously they carry around the little glass and metal object which they spend their time devotionally praying to, giving their attention to,” because that’s really where our attention is. So that was really where the idea for the novel and now the series came from: the idea of new gods and old gods, the idea of clash between them, the idea of a book that was fundamentally about America, about traveling across America, and about all of the different people who live here. It became very strange when we started making it and has become stranger since the world has gone mad…

You know, of course you write a racially diverse book because you’re in racially diverse country and if you’re writing about that country and all of these people you’re going to have lots of different races and having a mixed-race hero seemed to embody the idea of America. Of course he’s going to be a mixed race because it’s America and he’s our hero and so that’s where we’re going to go. Watching that stuff now again become the kind of stuff that people are proudly announcing that they are going to boycott the show over? I love the [idea] of “boycott.” In the old days we called it “not watching,” which has less emotional impact.

What type of diversity challenges did you face when shooting this?

With Starz, and with Bryan Fuller and Michael Green, although it wasn’t even necessary, I was saying, “Things will get changed between the book and the screen; I understand that. I am not precious. A novel is not a television series; I understand that. [But] you will change the racial makeup of any of these characters over my dead fucking body and that is not negotiable.” And everybody was like, “OK.” And what was lovely was there was no pushback. There was no argument. There was an absolute embracing of that. And Bryan, bless his little tailored cotton socks, has been really good about checking with me on things.

I remember with the character Bilquis [played by Yetide Badaki], he phoned me up and said, “OK, who are we casting here? And what is Bilquis racially?” And I said, “Bilquis is the Queen of Sheba and as far as we know, that’s black. That’s African black and we don’t historically know where Sheba was. There’s some ambiguity, but we have The Song of Solomon, we have that line about ‘I am black and beautiful,’ and you’re going black there.”

How much involvement will you have in shaping the show?

I’m always accessible to Bryan and Michael wherever I am. And they have taken full advantage of this. I remember a few months ago being on a long drive going through the mountains of Pennsylvania and the phone ringing, and I didn’t even think we had service.  And it’s Michael saying, “So we’re stuck on this episode, what do we do?” Him just explaining their problem. Then he goes, “That’s interesting; [it’s] not a hard one.” I’ve discovered that it can be dangerous sometimes to express opinions to Bryan and Michael, as with episode five, which opens with an animated sequence. I phoned them after I saw the almost-finished animation, with the narration in place, and I said, “Look, I know that the narration looked good on the script but actually it doesn’t work very well with the animation, the way these things are put together. We need to write a new narration for the animation that really makes it feel like it’s a part of it.” And Michael was like, “Yeah, we just saw it and we’re thinking the same thing. When can you get it to us by? You can probably do it better than anyone else. Can you get it to us by Thursday?” It is dangerous, I’ve discovered, giving them options because you may wind up writing the new thing for them.

But I want—if humanly possible, despite having a life right now that does not allow for this—I want to be in the writers’ room for the first week of season two, if we are given a season two, because I think that’s the smartest possible thing that I could do… I think being there at the beginning is going to be important. Being available for them is important. I put this thing together. I wrote the novel. I care about it. It’s hugely important to me. I don’t want to see it jumping sharks—or any kind of dangerous sea creature. MM

Screenwriters to Watch, Class of 2016: Where Are They Now? Checking in With Seven of Last Year’s Picks
Comic Timing: Slack Bay Continues French Director Bruno Dumont’s Pivot Into Slapstick and Farce