Kornél Mundruczó, a well-known theater director in his own country, is one of a small handful of contemporary Hungarian moviemakers who have made a name for themselves on the international festival circuit.

For a long time, Mundruczó was known for his heavy existential dramas, love-triangle melodramas with protagonists unable to love, communicate or deal with the moral issues they came up against. Pleasant Days, a Silver Leopard winner and his first international success in 2002, followed a young mother who gives up her baby for adoption. Once she changes her mind, she has to fight to get him back. His next movies similarly dealt with complicated human relationships: Tender Son (2010) focuses on parental leave, and Delta (2008) with incest. Both were selected into competition at Cannes Film Festival.

Today, Mundruczó is a Cannes regular. Though in the meantime, he has chosen new artistic paths. In 2014 his “nature’s revenge against man” film White God took home the Un Certain Regard prize at Cannes. In this movie, Budapest served as the setting for an apocalyptic vision where the authorities round up packs of stray dogs that have taken over the streets. Mundruczó, who was working with DP Marcell Rév for the first time, decided to shoot the scenes with 240 real dogs to keep the usage of CGI to a minimum.

With his follow-up, Jupiter’s Moon, Mundruczó again made a showing in competition at Cannes. Using the European refugee crisis as a backdrop for larger ideas about ethics and human behavior, the movie follows a cynical and fraudulent doctor, Gabor Stern (Merab Ninidze), who stumbles upon a Syrian adolescent named Aryan in a refugee camp at the Serbian-Hungarian border. Aryan (Zsombor Jéger) not only survives a hail of bullets, but he also discovers he can levitate and use telekinetic powers.

Stern sees an opportunity for making big money out of the boy’s skills, so he persuades Aryan to be his business partner. Their scam is to visit patients with terminal illnesses who are willing to pay a fortune for a glimpse at the supernatural. The relationship between the doctor and his protégé is limited to conversations in broken English; however, Stern’s experience of Aryan’s abilities confronts him with his own past mistakes.

Merab Ninidze and Zsombor Jéger as Stern and Aryan, respectively, in Jupiter’s Moon

This is the second film in Mundruczó’s oeuvre in which he portrays doctors who have to cope with the presence of the supernatural—Johanna, his 2005 opera film, follows an ex-morphine addict nurse who discovers her talent for healing dying patients through sexual intercourse. Her strenuous activity results in exaggerated gratitude from the clients and a wish for revenge from the doctors.

Mundruczó, who regularly challenges himself with on-set special effects, raises the bar for himself in Jupiter’s Moon by including car chases and dangerous flying scenes. Characters roam the bustling streets of Budapest, over rooftops and hidden underground tunnels, while DP Marcell Rév’s long takes immerse us in the film in a noir-like milieu with neon signs, yellow lights and smoky sleazy pubs full of disappointed alcoholics. As depicted in Jupiter’s Moon, Budapest is home to swanky restaurants, sumptuous Turkish spas, exclusive ballrooms and a hotel where the receptionist is played by the director himself. Every time Aryan executes his superpower to lift himself up in the air, all while moving like he’s swimming, he brings other people to their knees as they believe they see an angel.

We took the opportunity to sit down with Mundruczó and DP Rév at Cannes this May to talk about their visually captivating action thriller, considered to be the second part of a “trilogy of faith.”

Lilla Puskás, MovieMaker Magazine (MM): Images of the European refugee crisis are well known to audiences. When creating the visual concept of the movie, did you strive to recreate these images or you did you wish to diverge from them?

Kornél Mundruczó (KM): In fact, we aimed for a combination of the two. Our team recorded several hours of documentary materials in Budapest for the sake of an authentic set design for the refugee camp. However, in some other ones, we wanted our imagination to dominate over reality.

MM: You originally cast a young Syrian refugee as Aryan. What made you finally work with a young Hungarian actor instead?

KM: During our half year of casting in Syria, we realized that we couldn’t work with refugees because they all had to take off before we would finish shooting. Nobody stayed with us. It felt like sieving sand. Later, we found somebody in Germany, but he couldn’t come to Syria for the shooting without losing his refugee status. Finally, we decided on Zsombor Jéger one week before we started shooting.

MM: What was it about this story that needed to be expressed through the motif of flying?

KM: We wanted to include a miracle in the story. I think this movie also requires active participation from the viewer, since they have to make a choice whether or not to believe that the hero can fly. An active viewing experience is something that I always strive for with my movies.

MM: Throughout the movie, the protagonist’s supernatural skills changes; in one scene he levitates, and in another he develops telekinetic skills. What was your concept behind this complex depiction of his talent?

KM: I wanted to avoid redundancy in the screenplay to surprise the viewer. Not only are there different miracles in the movie, but the consequences are different too. After encountering these miracles, someone dies and someone loses his mind. My attempt was to demonstrate different answers that could be provoked by a miracle.

MM: When it comes to special effects, why is it essential for you to create them exclusively on set?

KM: I think the essence of filmmaking is still about capturing reality. An actor’s facial expressions are not equal in front of a green screen versus actually levitating 30-40 meters above the city. This is the reason why I insisted on this idea, but at the same time, I’m not against VFX either. I believe there are examples of appropriate usage of VFX, but it is something that is rarely seen. It often results in something ridiculously artificial.

Marcell Rév (MR): We built a moving system with Róbert Nagy, our grip, in order to make the camera fly. In most cases, we fixed the camera to wires, ropes or a tracking system. For the actor’s movements, Balázs Farkas’ stunt rigger was responsible; he laid out different machines to enable him to levitate. Our costume designer also put hidden lashing points underneath the actor’s clothes. Sometimes, we used classical tools like telescopic cranes, handheld cameras and dollies. In other cases, we had to come up with our own solutions to create lashing points to enable camera movement around the hanging actor. This way we were able to create more complicated scenes: For example, the camera approaches him while he is rotating around his own axis and so on. In some scenes, we used a three-axis head as well that enabled 360-degree camera movements.

MM: Does that mean that every single flying scene was designed differently?

MR: If I remember rightly, we didn’t repeat the same method. Before we started shooting, we had several test days when we compiled a list of all the elements we were able to execute. Before every single flying scene, we had to decide on a combination of these elements.

MM: Which scene did you find the most difficult to shoot?

MR: Every scene was complicated from a technical point of view, especially the one at the subway station. There were about 300 extras and vehicles there, and we had to lift a huge cube with the camera by a gigantic crane up to the top of the building. It was difficult to start it over and over again, as we reshot the scene about 10-20 times.

MM: What challenges did you face with the long takes?

MR: The opening scene, for instance, includes hidden cuts because the location we needed didn’t exist as it appears in the movie. We shot this scene in five different places. The sunrise scene was also complicated because of the timing. Not to mention that underwater scenes couldn’t be recorded in a real river because one cannot see anything. We shot on 35mm film, so we had to carry a 1,000-foot camera magazine that was very heavy. The group consisted of a focus puller, a sound engineer, a grip and me, and we all moved together alongside the actors. 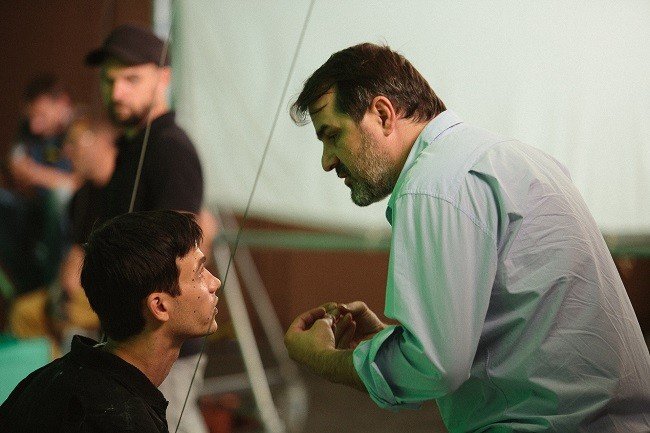 MM: Another incredible scene in the movie is when gravity stops working in an apartment. Can you shed some light on the making of this scene?

MR: Kornél had a set design from one of his theater pieces, Imitation of Life, and he came up with the idea of including it in this movie. The set looks like a cross-sectional view of a room, and it can rotate around its own axis. The shooting took place in a studio, with Zsombor hanging from a crane while the camera moved by a technocrane. It moved between wires, and in the end of the scene, it left through the window while the room moved around and furniture fell apart.

MM: How do you navigate the different genre elements in your movies?

KM: I don’t think pure genres are appropriate to create the most revelatory content. I believe they involve conventions and conservatism that keep real ideas hidden. On the other hand, mixing genres enables something real to unveil itself. Since I started to work on my previous movie, White God, I’ve felt the need for new challenges. Without these, I would have felt my work to be pointless. Connecting to genres means the search for new paths for me. I trust film genres, but I try to avoid using them only for their own sake. MM

How They Did It: The Freedom to Marry Gained Access to One of the Biggest Civil Rights Stories of Our Time
The Disease That is Fear: Trey Edward Shults on the Personal Inspiration Behind Horror Film It Comes at Night