How They Did It: This Director Braved Wasps and Morning Sickness to Shoot Moko Jumbie in Trinidad While Pregnant

Its protagonist is Asha, a young girl searching for her roots, who returns to her family’s home on a Trinidadian coconut plantation and is drawn to Roger, a local fisherman. Their attraction causes tension between their two families, one Indian and one African. Asha must defy racial taboos in the face of family disapproval, political turmoil and mysterious hauntings by ancestral spirits.

I grew up in the Midwest, in a city that was very segregated. I clung to my Trinidadian culture and romanticized my time in Trinidad with my huge extended family. We would stay with my grandparents in a three-bedroom house in the south of Trinidad, where my mom, along with eight brothers and sisters, grew up. The years went by, and my grandparents passed away. My family became disconnected, and the story of Moko Jumbie was born.

After years (yes, years) of developing the screenplay, traveling back and forth to Trinidad for research, prep and location scouting, my team and I were ready to shoot a narrative feature in the island’s countryside. I already had experience directing in Trinidad; over a decade ago, my short “Jeffrey’s Calypso” was shot on 16mm, and we brought in most of our equipment, including grip and electric. For Moko Jumbie, we received a digital camera package from the Canon Filmmaker Award and Film Independent. Richard Kim, our producer, made it through the electronic doors of Trinidad customs with the gear. Shlomo Godder, my partner and DP, and I convinced Anthony Fung, welder of his own flags and builder of his own apple boxes, to gaff for us. 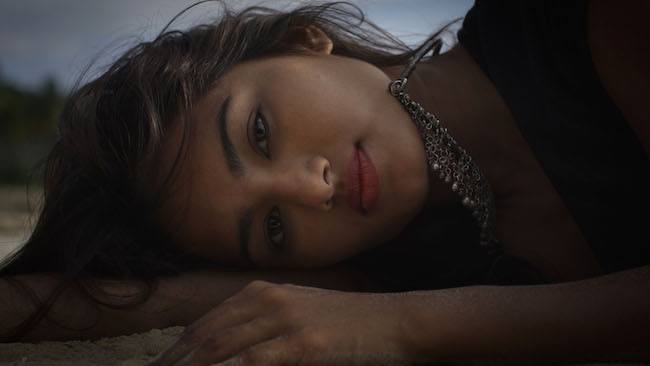 I knew that my budget was limited, so I wrote the script for minimal locations and cast, and I designed the shots with Shlomo accordingly. We used mostly hand-held shots with shallow focus, because we wanted to heighten the sense of looking at the world of the story from an extremely visceral, subjective point of view. There are only a few serious wides in the film, present when the location calls for them or when a break from the protagonist’s point of view is needed. The story blurs the real and the magical, and it was essential to create strong transitions between the two. The actual physical space where we would create this world had to be conducive to this.

Our main location was an older house across the road from a more modern-looking house. I had been dying to work with Dino Maharaj again since he acted in “Jeffrey’s Calypso,” and I wrote a role specifically for him in Moko Jumbie. He told me to check out Cedros, a rural area at the very southern tip of Trinidad, so rural that most Trinidadians don’t go there. It’s a magical place, with the perfect combination of overwhelming beauty and deathly gloominess that I was searching for. Only after I fell in love with the area did Dino tell me that he grew up there and that his family had moved from an old house to a newer house across the street and still owned both. At this point I started to believe that this shoot was being guided by a supernatural force.

We were a week out and about to go down to Cedros for prep. I suddenly was craving lemons and the smell of gasoline made me want to vomit. Shlomo and I showed up at Dino’s wife’s medical practice and asked her for a scan. She showed us the heartbeat. “Boarded the train and there’s no getting off,” to quote Sylvia Plath. Technically, I had boarded two trains.

I’m sure it’s different for everybody, but the biggest thing for me about being pregnant while shooting was the tiredness—take the standard exhaustion from directing a feature, then double it—and of course the constant need for hydration. In addition, there were physical challenges akin to an ’80s adventure movie: hacking through razor grass with machetes, braving mosquito bombardments (we actually felt them hitting our skin), repelling down cliffs. Jack Spaniard wasps circled during the day and bats flew freely at night. And let’s not forget the 12 solid hours of direct sunlight and 90-degree heat every single day.

There was no grocery store, guest house, or convenience store less than an hour away. The locals raised their own animals and fruits and fished and hunted “wild meat” in the bush. A man in a pick-up truck full of vegetables drove down the road every few days shouting, “Market man!” and honking his horn. We hired a cook and that was that. I cast extras from the village and borrowed furniture from the neighbor. Our crew was limited to how many people could fit in the main house. The good thing about that was that there was almost zero travel time to and from set. But it was close quarters—we felt like we were on The Real World, just without the fighting and hooking up. (Seriously, this was the most sober, non-partying crew I have ever worked with. We had a bottle of vodka, just dying for someone to drink it, that sat untouched on the kitchen counter for the entire shoot. Hell, I would’ve helped it out if I hadn’t been pregnant.) The great thing was that everyone was really focused, and that helped a lot with my fatigue. We all wanted the film to happen, and we all pulled together every day to make it happen.

Everyone knew the script really well, and because of that we could be flexible. There was a scene that I had written to take place in a room, but Dino grabbed a machete and said that he wanted to show me something. Shlomo, Oliver Milne (our killer AD) and I stumbled over fallen coconut tree trunks as Dino hacked our way through the neck-high razor grass. After a while we could hear water. He told us to stop—we were at the edge of a cliff—and changed direction. We kept walking up, up, up and finally got to a view of the coast and miles of coconut trees below. I changed the scene to take place there.

There were many moments like this, of discovery and flexibility. We were going to shoot a nighttime steel pan practice under an outdoor shed. When we got there, we realized that there was a massive colony of Jack Spaniard wasps living under the corrugated roof. The owner of the shed speculated that the percussive sound of the steel pan would eventually upset the wasps and we would all be swarmed. So we quickly shifted our location to a spot below a giant samaan tree, and I wrote that tree into the script. The locally famous silk cotton tree was already in the script, but for other reasons.

Anderson directing the Kaisokah Moko Jumbies stilt dancers with a megaphone at Columbus Bay in Cedros. Photography courtesy of Icefish

Before we got to our location, a silk cotton tree was struck by lightning and broke through the roof of the house. In Trinidad, this is a bad omen. The silk cotton tree is the place where all the folkloric spirits gather and all sorts of magic goes on. The woman who lived across the road said that since then, she would shine a flashlight into the house at night to see if she could catch sight of any spirits. Everyone within an hour radius knew we were making a film called Moko Jumbie, and those same people knew that “Moko” is the name of a West African god and “jumbie” means spirit. Local belief is strong, and I quickly realized that people were scared of us. They would drive by, slow down so they could get a look, and speed away. The spirituality of the place got into my head, too. There was a scene that we shot in a graveyard riddled with giant toads, and I started to wonder what the metaphysical implications were of being pregnant, in a graveyard, at night, surrounded by strange amphibious guardians of the dead.

The woman across the road reminded me to wear cobalt blue for protection through the rest of my pregnancy, and I made it through post without incident. My son was born when I got back to NYC, but somehow Trinidadian music makes him dance.

How They Did It: I Set a Start Date for My $250,000 Film, September Morning, and Stuck to it No Matter What
Making a Living by Mixing Media: How to Make the Leap From Directing Features to Directing Television