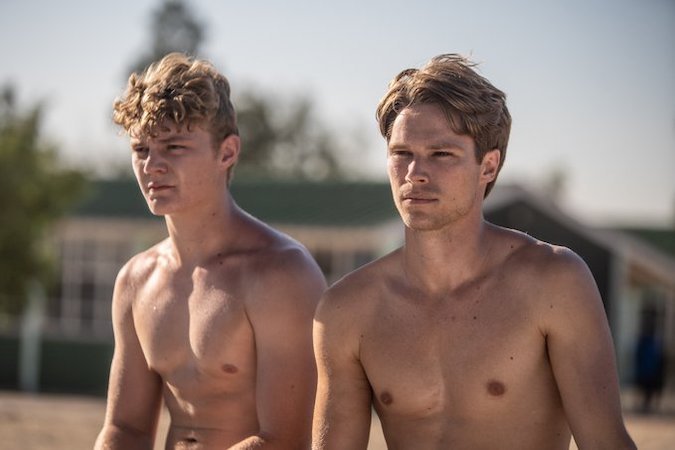 Moffie, an exquisitely subtle and powerful story of apartheid-era South Africa, has earned many approving mentions of the way it seems to reference Full Metal Jacket and the volleyball scene in Top Gun.
The film, about a gay conscript into the deeply racist and homophobic South African military in 1981, has earned glowing reviews for its controlled, haunting portrayal on bigotry, played out in show-don’t-tell vignettes in which Nicholas (Kai Luke Brummer), the young soldier, deals with a country that loves his military service, but considers his sexuality a crime.
Many critics have observed that Moffie seems to reference not only the boot camp segment of Stanley Kubrick’s 1987 Full Metal Jacket but also to borrow a musical cue from the director’s 1975 Barry Lyndon.
But nope, says Oliver Hermanus, the film’s director and co-writer.
“It’s completely accidental,” he laughs. “I just kind of had a rule that we did not watch any military films while writing and particularly shooting… out of the fear that it would make us sort of imitate other films.”
He recalls that when the film premiered, “there was a lot of conversation about how I probably intentionally reclaimed the volleyball scene from Top Gun, which also we were kind of completely surprised by.”
Hermanus talks about how certain elements of war films nonetheless crept into Moffie in the latest MovieMaker podcast, which you can listen to on Apple or Google or Spotify or above.
He also talks about being born in South Africa in 1983, when the white government was still trying to prop up apartheid.
“It was very violent time, it was a time when the government was really cracking down on what they deemed illegal organizations,” he says. “And my parents belonged to many illegal associations.”
His family was classified as “colored,” or of mixed race, he explains, noting that the term wouldn’t be used in the modern United States. His parents’ activism included taking their children to whites-only beaches, and staging chess games.
“My dad’s chosen form of protest, which is very hilarious, was my dad is an incredibly brilliant chess player,” Hermanus explains. “And so he would arrange illegal chess tournaments between Black, colored and ultimately white chess clubs. And that was illegal at the time. You could not play, and nothing was interracial. You could not do anything across racial lines. And my dad did that.”
Moffie is now playing in theaters and is available on digital and VOD platforms.
Main image, above: Matthew Vey and Kai Luke Brummer in Moffie, directed by Oliver Hermanus. Courtesy of IFC Films.

How Much of Amazon's Them Is Based on a True Story?
What Lies Below: 8 Red Flags That Pointed to Stepdad's Abuse — Before the Lizard Stuff