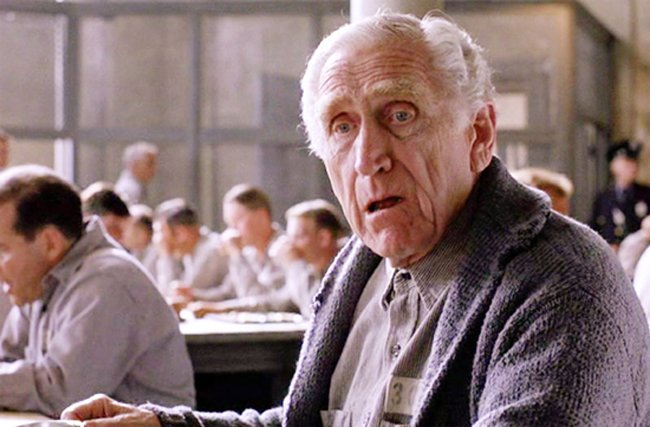 Character actor par excellence James Whitmore had dozens upon dozens of film and TV credits on his lengthy resume—everything from Broadway-spawned musicals (Kiss Me, Kate, Oklahoma!) to edgy crime dramas (The Asphalt Jungle, Madigan) to fact-based war stories (Battleground, Tora! Tora! Tora!). But I suspect that, depending on their age, most movie buffs remember him best as either the hard-bitten police sergeant who tangles with atomic-mutated ants in Them! (1954) or the tragic convict who can’t cope with the pressures of post-prison freedom in The Shawshank Redemption (1994).

It was during a Toronto Film Festival press junket for the latter film that I had my one and only encounter with Whitmore, and I can say he was a very gracious and gregarious gent who laughed louder than anyone else at jokes about his long-term gig as TV pitchman for Miracle-Gro plant food. He also spoke very candidly about his past struggles to overcome alcohol abuse, and was extraordinarily compassionate toward me, a total stranger, as we discussed in private a similar struggle facing someone very dear to me. And he seemed richly amused when I told him how much I enjoyed him as part of a once-in-a-lifetime cast in The Split, an unjustly overlooked 1968 caper flick (based on a novel by Donald E. Westlake) that also provided gainful employment for Jim Brown, Diahann Carroll, Ernest Borgnine, Julie Harris, Jack Klugman, Donald Sutherland, Gene Hackman—and Warren Oates.

BTW: For those of you who supplement your income with trivia-centric bar bets, consider this: Give ‘Em Hell, Harry— the 1975 film version of the one-man play in which Whitmore memorably essayed Harry S. Truman—is one of only two movies ever made that earned Best Actor nominations for every single actor who appears on screen. I could tell you what the other movie is, but then I’d be accused a spoiling a classic plot twist. (No, not Who‘s Afraid of Virginia Woolf?—unnominated bit players actually do appear on screen in that one.)