Mr. Rogers Wasn’t a Navy SEAL, But the Beautiful Day in the Neighborhood Writers Know Where That Myth Started 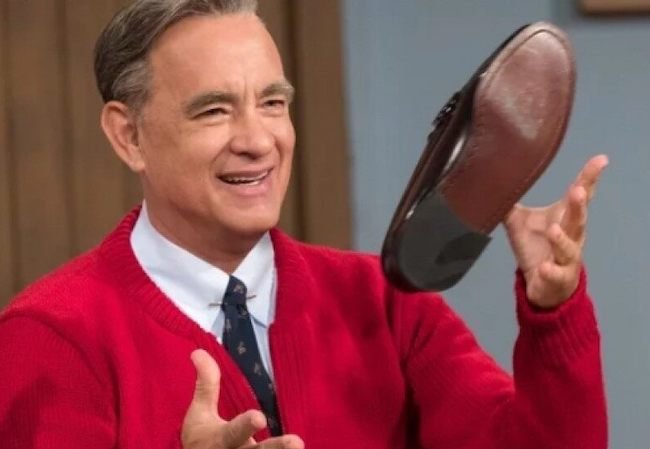 Mr. Rogers, aka Fred Rogers, the host of Mister Rogers’ Neighborhood, was not a sniper or Navy SEAL. But variations on that urban myth began late in his life, and the screenwriters of A Beautiful Day in The Neighborhood have finally figured out where the rumors began.

Screenwriters Noah Harpster and Micah Fitzerman-Blue sat down with the MovieMaker Interviews podcast, along with Tom Junod, whose beautiful Esquire magazine profile of Rogers helped inspire A Beautiful Day in the Neighborhood.

First things first: Junod told us he knows Rogers wasn’t a sniper, because he once saw Rogers naked, one morning when they went swimming.

You may wonder what nudity has to do with being a sniper. As Junod explains, the “Mr. Rogers was a sniper” urban myth was predicated on the idea that Rogers always wore long-sleeve sweaters to conceal tattoos that tallied his many kills.

The notion may sound ridiculous to you—and it should—but the myth is so persistent that the U.S. Navy SEALs have denied it online:

“While there are rumors that Mr. Rogers, the host of internationally acclaimed TV show for children—Mister Roger’s Neighborhood, served as a Navy SEAL or a Marine Scout Sniper during the Vietnam era with a large number of confirmed kills, we have to state it is false. Mr. Rogers never served in the military.”

But at the very end of our interview, Harpster revealed that in a decade of research on Rogers, he and Fitzerman-Blue learned the source of the urban myth. It turns out there was another Fred Rogers.

“So there was actually a guy named Fred Rogers, who was a Marine, who was a sharpshooter, who started a security business. And he for a moment put up FredRogers.com as his business,” Harpster said. “And it was almost immediately taken down. But people found that.”

Also Read: Why Joanne Rogers Didn’t Want a Saintly Portrayal of Her Husband

And so began a lot of confusion… and people spreading a myth just because it was funny.

The movie A Beautiful Day in the Neighborhood briefly alludes to the rumors about Rogers in a scene when a visitor to Rogers’ Pittsburgh home inquires about his military history — and Rogers (Tom Hanks) laughs it off. As that scene indicates, the false rumors started before his death in 2003.

Hanks received a Best Supporting Actor nomination for his performance as Rogers, but lost to Brad Pitt for Once Upon a Time… in Hollywood, in which Pitt played a character who was pretty much the opposite of Rogers. We’re also willing to bet that Pitt’s character, stuntman Cliff Booth, is a better sharpshooter than the beloved children’s TV host.

The latest MovieMaker Interviews podcast with Harpster, Fitzerman-Blue and Junod also features Daniel Kaluuya, star of Queen & Slim. You can listen on Apple or Spotify or right here:

16:05: Interview with “A Beautiful Day in the Neighborhood” screenwriters Noah Harpster and Micah Fitzerman-Blue, and Tom Junod, whose Esquire article “Can You Say… Hero?” helped inspire the film.

28:50: How Noah discovered Rogers was “a warlock who speaks toddler.”

30: At one point Rogers’ estate said there will “never ever be a Mister Rogers movie.”

A Beautiful Day in the Neighborhood is now available on demand.

Does Batman Have to Be Buff? (Podcast)

The Film That Predicted the Pandemic; Build a Better Monster; Movies for 15 Cents (Or Free)