What’s in Your Kit? Cinematographer and Director Michael Williams (The Atoning) 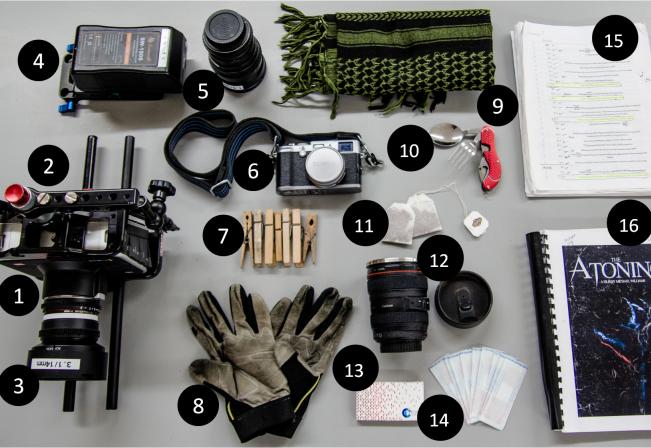 For our series “What’s in Your Kit?,” we ask a range of working cinematographers to share the gear they can’t live without.

Michael Williams is the writer, director and cinematographer of supernatural thriller feature The Atoning. Starring Virginia Newcomb, Michael LaCour and Cannon Bosarge, Williams’ second feature (after 2014’s OzLand) was shot over 12 days in Mississippi, in a single house location. The Atoning has played at Oxford Film Festival, Magnolia Film Festival and Azalea Film Festival, with more festival stops to come.

Outside of directing, Williams has served as DP on a range of other shorts and features. Here, he reveals what’s in his kit.

Our film had a limited budget and we knew that shooting in 4K was essential in terms of future distribution opportunities. Because of this, Blackmagic Design’s Production Camera 4K was the ideal choice for The Atoning. The size, picture quality and convenience of both shooting with the camera and editing the footage was perfectly in line with how I like to shoot and edit. I try to get as much right on set as possible and shoot very economically in terms of coverage, setups and the look of the footage. I prefer a streamlined camera package. I feel more in tune with a camera when it can be used with a sense of minimalism.

While the footage captured did allow for a lot of grading options in post, I only wanted to refine the look in post and fix errors when needed, instead of trying to create a “cinematic” look to the color and lighting. I come from a DSLR background, where you’re better off getting the look you want on set rather than trying to create a look in post. This camera allowed me to do that while also refining the look and correcting some errors I found in the footage in post (for which we used DaVinci Resolve).

Director-DP Michael Williams on the set of The Atoning

As both a director and a cinematographer who operates and pulls his own focus, I typically carry the camera around with me on set to use as a viewfinder, so I can quickly move between setups. I need a cage or rig that allows me to quickly go from sticks, to handheld, to apple box, to floor, etc. I also needed a rig that was small enough to not get in my way. The Atoning takes places entirely in the same house with the same rooms being seen all throughout the film. This required the camera and me to squeeze into some tight situations to keep the shots interesting and make the most of the house in terms of shot variety.

To create the “elegant horror” visual style that I wanted in The Atoning, this 14mm lens was essential. Plus, it helped us make the most of the set and the tight spaces we needed to film dynamically.

Even though it added some extra bulk to the camera, having an extra portable power source for the camera was key in keeping us moving throughout the long days on set.

These lenses coupled with the Production Camera 4K gave me the look I wanted for the film. I generally used the 24mm and 35mm; however, there were occasions where we needed the 50mm and 85mm.

I am in love with this still camera. I bought it back in 2012 as my “fun” camera. (Carrying around my DSLR always felt like work.) I love the look the camera provides, and it is immensely handy on set since I am rarely able to leave. On independent films, it is vital to have good behind-the-scenes photographs and production stills to promote your film in posters, press materials, social media posts or your personal social media. On set, I often see the perfect opportunity to quickly grab a behind-the-scenes shot of the actors or crew.

I’m a very hands-on cinematographer in terms of lighting; I may be tweaking a setup until the very last moment. Sometimes a clothespin makes a real difference in the lighting. Having these on me at all times allows me to tweak things as I need. Same goes for my gloves: I need to have them ready to go at all times.

This wasn’t really vital for the all-interior shooting of The Atoning—however, for my previous feature, OzLand, and other films with a lot of exterior locations, it was extremely helpful. For OzLand, we shot a quarter of the film in the heat of a Kansas summer and the rest in hot, sunny, rural areas of Mississippi. I relied on this scarf to be able to see the monitor and hide from the sun. Plus, you look cool wearing it. Win win!

In 2015 I worked on a feature film with wonderful catering. However, the plastic spoons, forks and knives provided were the worst! Nearly every meal resulted in multiple broken utensils. Early in the shoot, the lead actor and I had talked about trying to eat with these horrendous plastic utensils. At the end of the shoot, he generously gave gifts to ever member of the crew—items based on each person’s personality. My gift was this multi-utensil tool.

I keep this with me not only to have a reliable way of eating my meals and snacks on set, but to also remember how thoughtful this actor was to every member of the crew. It is a great example of not only being prepared on set, but also remembering that how you treat and interact with fellow cast and crew is vital to your enjoyment of and success in the industry.

I do not drink coffee, but I have to have tea! Being a Southern boy, I prefer iced tea with my meals, though I no longer drink sweet tea or sugary drinks (unless it’s absolutely necessary for keeping my stamina up). Movies shot in the South often have unsweetened iced tea for the meals. Sadly, hot tea is rare, so I keep it on hand throughout the day. This keeps me happy, alert and hydrated.

I drink it from my lens mug. It never gets lost on set—cast and crew often mistake it for a real lens, and either refuse to touch it or tell me where I left it, thinking I left a pricey piece of equipment lying around.

Gum helps me stay content between meals, and prevents me from offending cast and crew with bad breath when in close quarters.

I always end up with minor injuries on set: hangnails, cuts, etc. I may need to quickly grab a bandage and keep working.

Virginia Newcomb stars as Vera in The Atoning

On a film like The Atoning, where I am wearing a lot of hats, I need to be confident about what we need and want for each scene. These shots lists were a major reason why we came in under budget and ahead of schedule on The Atoning, while exceeding our own expectations for the film’s visuals.

I don’t want to just make pretty pictures. On set I refer to the script to remind myself what we are trying to achieve both visually and from a story perspective in each scene. I feel like I’ve succeeded as a cinematographer when the visuals tell the story in conjunction with every other part of the process.

Gear I’d Love to Have