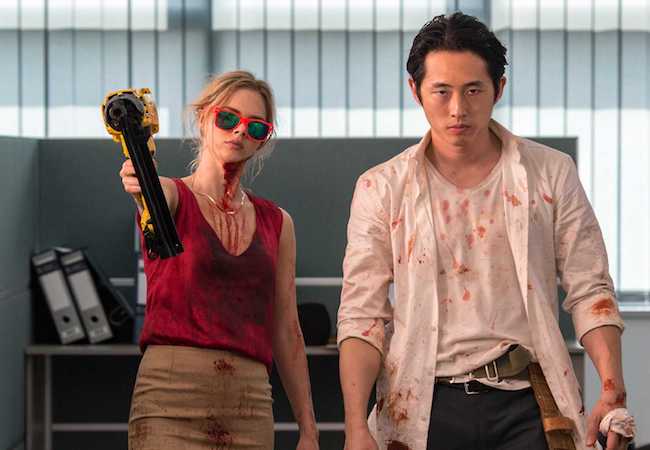 Joe Lynch is a worker.

Ten years ago, with his first feature Wrong Turn 2, he showed jaded horror fans that he completely understood how to measure humor, terror, and gore, and came up with a sequel that was better than it had any right to be. His following work displayed the same sensibilities, and for the last decade he has been honing those sensibilities into a style that is all his own. From the goofy humor of Knights of Bad Assdom, to the balls to the wall action of Everly, Lynch has been inching, film by film, toward the bigger leagues.

His latest release, Mayhem, may just put him in that other bracket. Starring Steven Yuen (The Walking Dead, Okja, and the upcoming animated films The Star and Chew), and Samara Weaving (The Babysitter, Ash vs. the Evil Dead, and the upcoming series Picnic at Hanging Rock), Mayhem is an unholy marriage of Glengarry Glen Ross, Battle Royale, and 28 Days Later. Skewering corporate law and remarking on issues surrounding ethics and inhibition, it delivers its message while bringing the proverbial noise. It’s a thrash pit of a film, violent, furious, and hilarious.

Mayhem never devolves into zombie film cliche, and be assured, the ID7 virus does not take root in the way most cinematic “rage” viruses do. (The infected are not “zombies.”) At the same time, you would not want to be caught in a quarantined building with a bunch of co-workers you can barely stand while ID7 courses through the bodies of those around you. Bad things man, bad things.

MovieMaker spoke with Lynch about how Mayhem grew out of his dull former day job, the benefits of shooting in Serbia, making the film in 25 days, and more.

Director Joe Lynch on the set of Mayhem. Image courtesy of RLJ Entertainment

MM: Your screenwriter, Matias Caruso, has only written short film up to this point. How did the script for Mayhem initially cross your desk?

Joe Lynch (JL): Funny enough, there is that adage, “When a film came a cross my desk,” but it literally did hit my desk when I was working in a corporate office, in a cubicle, just trying to make ends meet. When I first read it, it felt like either someone was playing some kind of joke on me, dangling this carrot of, “Hey, there’s this movie you will completely resonate with, because you aren’t making movies right now, you’re working a corporate gig, so this is how it feels,” and I was blown away at how much I connected with the characters and the story, like someone tapped into my brain. It just totally got me, it felt like I wrote it. I told Circle of Confusion, the production company that optioned the script, “Look, there’s a difference between wanting to do this movie and needing to do this movie, and I need to do this movie.” It was immediately a passion project, and much more than just a gig.

It took about eight months for me to really jump in. Being that I was working said corporate gig at the time, I was literally writing things down that I was hearing that and being frustrated by in board meetings. I told Matias, “Look, we’re going to have to put the phrase ‘Let’s discuss’ in this a lot. Terms like that, when I hear them in the office, it gives me hives, because it’s the most passive-aggressive thing you can say in that space. It’s non-commital, and almost inhuman. I’m like ‘Just say it dude, don’t tell me we’ll put a proverbial pin in it, or let’s quote-unquote ‘sidebar’ this conversation. Just tell me you didn’t like it, and let’s move on.” No one speaks how they really feel.

MM: We are in an era when established moviemakers, with bona fide hits in their background, have a hard time getting the money they need to make a film. What were the hoops you had to jump through to get Mayhem the budget it needed?

JL: When I first hooked up with Circle of Confusion, we had a budget that we thought we would be set at, which was much higher than what we ended up with. Considering the scope, the visual gags, and the overall feel we were going for, we felt we needed a certain amount of money, and that’s where we developing at. So in that eight months of lead in, we were going to investors, and I finally got the call that we landed financing. But before I could have my Rocky freeze frame moment and start singing “Flying High Now,” they said “Well, hold on. It’s not all the money. It’s there, but it’s not everything”. Now, at the price point we were at, there was a very short list of actors that could play the lead character Derek, who was caucasian at the time actually. These were names where we knew we would have a return on investment at our price point. But the industry, and the world has changed, so a lot of people are reluctant to take a chance, if take a chance at all, and there needs to be a guarantee that by an actors name alone, and their face being on the poster, there is going to be money made. So I looked at that list and went, “Eh, do I really want to make the movie with that guy, or that girl? Not really.”

So we held off, until we got the call about our financing. The bad news was we didn’t get as much as we hoped for, which sucked because I was hoping we’d finally have enough to really do things right. Honestly, it ended up being my lowest budgeted film to date. But, at the same time, our sole investor, while unable to get us more money, also said, “It’s not cast contingent.” So, that list of actors I would have needed to make Mayhem at its original price point? Gone!

Now, I could actually cast who I really felt in my heart would be the right person for the part. That is so incredibly rare these days. Other projects I have been on, or am on right now, that list of six or seven guys comes up again. And in most cases? They simply are not right for the part. So now, with the lower budget, I am able to cast who I want, not someone who is going to show up for a paycheck then walk away. I’m like, “Fuck yeah man, this sounds great!” It was worth having less money, because if I had more, I wouldn’t have the cast I did, and for me, they really make the movie.

MM: You also shot Mayhem in Serbia. What were the benefits of shooting outside the United States?

JL: Well, I had done Everly, my previous film with Salma Hayek, in Serbia. Again, part of the reason for that was that the budget was low, and the tax incentives were great. I did not want to go halfway around the world and be away from my family. I was already balking at the idea that I may be in Albuquerque, NM, much less in a time zone with a difference of nine hours. I thought it was going to be like being in Siberia, or an entirely other world.

But man, the crews there, the local talent that work there, the artisans, are completely amazing. I was mind blown. Very rarely do you get a chance to work with crew that really, truly love what they’re doing, and will go to the ends of the earth. Of course that is not to say I haven’t been fortunate to work with other amazing crews, but there is a passion that these artisans in Serbia have, and bring to the table, that can be a little extra special.

When Mayhem came along, we originally looked in Pittsburgh, New Orleans, Vancouver, and so on. With filmmaking, time is money, so the amount of shooting days you get will kind of dictate the quality and scope of the work. Those places it was 15 or 16 days, and I’m saying to myself, “I don’t know how in the hell I’m going to pull this off!” So, I sheepishly brought up the idea of returning to Serbia.

So, shock of shocks, I was told, after that decision was made, that I had not 15 but 25 days to shoot Mayhem. That is an incredibly significant difference. How would I sleep at night, knowing that just because I wanted to be closer to my family, and film in say, Vancouver, rather than Serbia, would affect the movie adversely, due to those time restraints as far as my shooting schedule. But again, without the Serbian benefits of tax incentives, and those amazing crews, Mayhem would not have been nearly as good as I think it is.