Keep on Keepin’ On: Mario Van Peebles on How His Father Brought Sweet Sweetback’s Baadasssss Song to Life

Sweet Sweetback’s Baadasssss Song tells the story of its titular character, Sweetback, in a never ending struggle with “the man,” as his retaliation against the police in an effort to save a young Black Panther member sends him on the run. As timely as ever, the film is both a radical experiment in avant garde cinema and one of the most important stepping stones in African-American cinema.

To introduce the 35mm print of Sweet Sweetback’s Baadasssss Song, Mario Van Peebles,  took the stage in the Egyptian Theater, along with his father Melvin, to speak with University of Chicago professor Jacqueline Stewart, about the making of the film, its widespread influence, and their own relationship.

On Melding Visuals With Music

My father’s film is called Sweet Sweetback’s Baadasssss Song. The notion was that this was a call and response song. A lot of the music in Sweetback was almost like a ghetto opera. My father was in France, and really started digging The Threepenny Opera and Bertolt Brecht. He started feeling like the music in America had too much Doo Wop or Motown melody. These styles of music had nothing to do with the reality that folks were experiencing on the street. Hollywood was all laughing and singing “ooh we baby” while Rome was burning. Malcolm X said “Freedom by any means“ while Doctor King said “Freedom by peaceful means,” but they killed them both. Then, you had the rise of the black power movement, but none of this was reflected in the cinema.

Over in France, my dad was able to stand back from this contextual painting of the melting pot that was America and say, “No one’s writing or talking about what’s happening in the streets.” He started to do spoken word, which then morphed into what was, in a lot of ways, the pre-cursor to rap. As a kid, my dad would always ask my sister and I to hum random tunes. We’re like the Jackson Five but without the talent. But we know that. My dad ultimately saw Sweetback as music and cinema connected. It’s like what we see in music videos nowadays—Sweetback is surreal.

On Growing Up on a Set

Growing up as kid on my dad’s sets, I had an inkling of what the world was about. My dad told me early on, “Some dad’s might teach you to play ball, I’m gonna teach you to own the team.” He kept telling me that, especially for people of color, you need to understand the business side of show business. You need to be able to speak the language of finance. If you take the studio’s money, you can’t make something that rejects them. You can’t take McDonalds money and make Super Size Me; you can’t take the NRA’s money and make our new movie Armed; you can’t take “the man’s” money and go up against the man in Sweetback. The goal for my film, Badass, was to show a man, my father, who understood the war and not just the battle.

On Being Inspired By His Father

Cats like him doing what he did in 1971 made it possible for me to do New Jack City in 1991. Twenty years after he does Sweetback, I got to grow up and take a shot at it. And not just me, but Spike Lee, John Singleton, and a whole lot of other folks. We see something and say, “I wanna reach that success.” What was deep with my father’s films and on his sets, was that we saw people of all colors behind the camera—across race, gender, and preference lines. 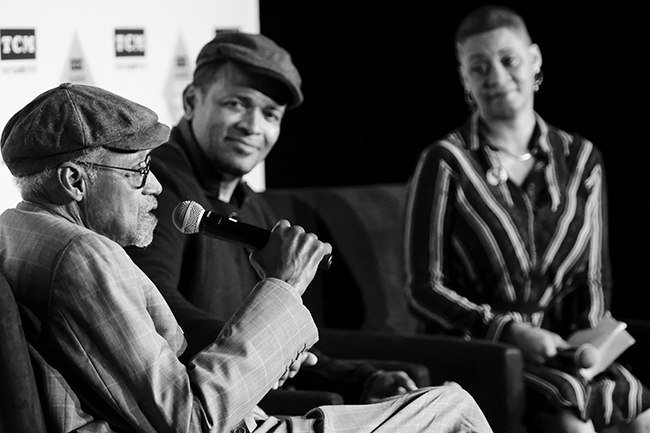 On Working in a Filmmaking Family

In our family, we don’t confuse loving people and thinking that your loved ones are good at what they love. My mom loves to act but she sucks—we don’t go there.

When you live on a family farm, it’s about taking care of the chickens and feeding the horses. If you grow up in an independent filmmaking household, you learn about directing, acting, carrying cables. I grew up seeing all of that. Whether I was going to go into this business or not, it gave me a sense of work ethic. Come early, leave late. There were times when he said, “I understand you’re 12, [or] I understand you’re 14. But you’re not on this movie. So we’re going to go all the way with this.” But I did have a sense that his overall care was about something bigger than our genetic family. It was about the human family. If we didn’t see human beings of all colors taking ownership in the building of this beautiful country and take pride in that, then we wouldn’t treat each other respectfully. You don’t just have to tell your story, you have to tell our story. MM

Wellman on Wellman: Reflections on the Enduring Legacy of A Star is Born at the 2018 TCM Classic Film Festival
The 10 Most Indie-Friendly Products From NAB Show 2018